The Biden administration is determined to keep a diplomatic presence in Afghanistan as the 20-year conflict comes to a close. 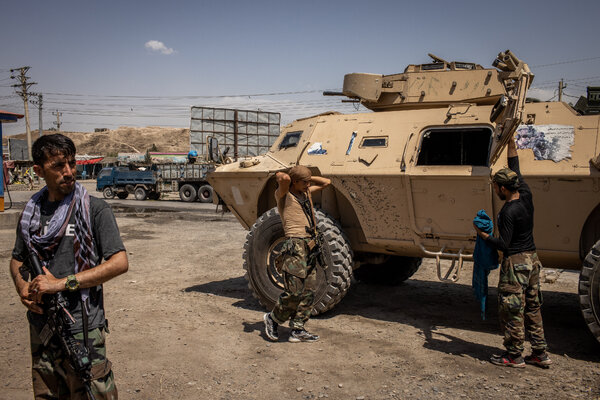 WASHINGTON — A Taliban rampage across Afghanistan is stoking fears that extremists could overrun the capital, Kabul, and force the evacuation of the U.S. Embassy. But inside the building, American diplomats emerging from a monthlong coronavirus lockdown are returning to business as usual.

The embassy last week restarted processing immigration visas for Afghan interpreters and others who could be targeted for working with the U.S. government as the nearly 20-year war rapidly comes to a close.

As of Sunday, officials planned to interview as many as 200 applicants each day. American envoys returning to their offices will again be allowed to leave the sprawling U.S. compound for diplomatic meetings in Kabul’s international security zone.

And a new crop of American diplomats assigned to the embassy will arrive this week for a one-year stint.

“I have had people reach out to me and say, ‘Will I still have a job? Should I still come out here?’” Scott Weinhold, the embassy’s assistant chief of mission, said on Thursday. “We fully intend to have the embassy here and open.”

Most American combat troops have left Afghanistan, and the top U.S. commander in the country, Gen. Austin S. Miller, stepped down on Monday. The military withdrawal has raised concerns about security in Kabul, and embassy officials described increasing worries among American diplomats and other employees.

In an interview from Kabul, Mr. Weinhold said that American diplomats there had been told they could leave their posts without penalty, but that he did not know of anyone who had accepted the offer.

“People signed up for a danger pay post, a hardship post, in what’s essentially been a war zone for quite a while,” Mr. Weinhold said. “These are people who put up their hand and said, ‘Yes, I’ll serve.’ So I think there is some sort of acceptance that there is risk involved, and this is what they signed up for.”

A decade ago, when American forces withdrew from Iraq, State Department officials stayed behind. The U.S. Embassy in Baghdad remains a frequent target for extremists, and American bases in the northern city of Erbil and in western Anbar Province were shelled last week.

Officials had largely assumed that the American diplomatic presence in Afghanistan would face a similar situation. But the Taliban advance has sowed doubts about whether U.S.-trained Afghan security forces can prevent a takeover of Kabul.