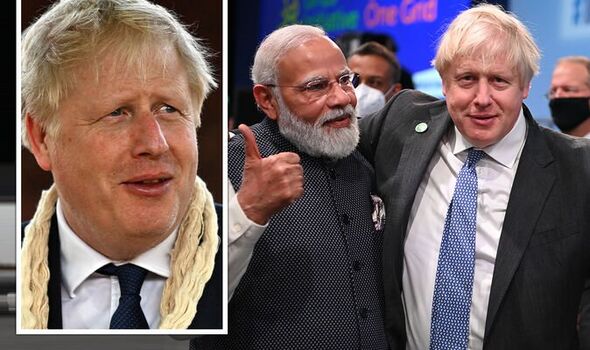 On the first day of his trade mission to the fast-growing Asian giant, the Prime Minister dramatically brought forward his timetable for the key post-Brexit agreement following a warm reception from his hosts.

Away from the continuing “partygate” row back home, he was given a superstar-style welcome on arriving in the Western Indian city yesterday.

Dozens of posters of the Prime Minister and his Indian counterpart Narendra Modi with the headline “Welcome To Gujarat” were on display on the roads from the airport.

Thousands of locals, many waving Union Jacks and Indian flags, lined the streets to wave at Mr Johnson’s entourage and several colourful dance displays took place along the route.

During a visit to a JCB factory in Gujarat, the Prime Minister said: “We’re hoping to complete another free trade agreement, with India, by the end of the year, by the autumn.”

He had previously targeted the end of the year as the date for finalising an agreement.

An Indian Air Force Chinook helicopter flew the Prime Minister to the factory in Vadodara.

Mr Johnson, who posed for pictures at the controls of a JCB bulldozer, held talks with business leaders at the factory in a visit held to highlight the British equipment manufacturer’s massive presence in India.

Speaking to reporters at the site, the Prime Minister hailed the factory as the “living, breathing incarnation of the umbilicus between the UK and India”.

He said: “This is a world-leading factory – 600,000 diggers a year coming from India, exported from India to 110 countries with British technology.”

But the visit stirred up some local criticism amid an outcry over the destruction of mostly Muslim homes in India using the company’s demolition equipment.

Sanjay Kapoor, editor of India’s Hardnews magazine, tweeted: “What a bulldozer of an irony! British PM Boris Johnson will inaugurate the JCB plant in Halol that will manufacture bulldozers on a day when Supreme Court is taking cognisance of the constitutional limits of the administration’s use of the machine.

“In India, it is being used to dispossess the poor and inflict collective humiliation upon Muslims. Hope that friends in the UK will make hold their PM to account.”

Questions were also raised about whether the Prime Minister visited the factory because the firm’s owner Lord Bamford is a leading Tory donor.

Mr Johnson’s spokesman said: “He chose to go to the JCB factory because it is a very good illustration of UK business, working with India and the Indian Government to benefit both the UK and India.

“This is something that helps benefit the UK, whether it’s jobs or investment.

He was presented with a copy of a historic guide to London written by Gandhi.

Referring to the national hero’s diet, the Prime Minister remarked that “vegetarianism costs far less than meat eating” as he on Thursday read from the book designed to be a guide for how Indians could manage in London in the late 19th century.

The Sabarmati Ashram, which was the centre of the peace icon’s non-violent struggle against British rule, was one of the first stops for Mr Johnson during his visit to Ahmedabad.

Mr Johnson also draped a ring of khadi cloth around a statue of Gandhi, who studied law at University College London during his stay in Britain.

After removing his shoes, Mr Johnson remarked: “There’s always a panic that the socks are going to let you down.”

Two women showed the Prime Minister how to spin the cloth promoted by Gandhi on a traditional wheel, with Mr Johnson telling them: “It’s a bit of an art, this spinning.”

Mr Johnson signed a guestbook, writing that it was an “immense privilege” to learn about how Gandhi “mobilised such simple principles of truth and non-violence to change the world for the better”.