WASHINGTON — Randy “Duke” Cunningham maintained a “bribe menu” on his congressional office stationery that featured different levels of payments he required from military contractors if they wanted his help to win corresponding levels of federal contracts.

As mayor of Detroit, Kwame M. Kilpatrick turned City Hall into what prosecutors called “a private profit machine,” taking bribes, fixing municipal contracts and even using hundreds of thousands of dollars from a city civic fund to spend on friends and family, as well as campaign expenses.

Robin Hayes, a former member of Congress serving as chairman of the North Carolina Republican Party, pleaded guilty to lying to F.B.I. agents about his role in a plot to bribe a state insurance commissioner as part of an effort to secure $2 million worth of donations toward state re-election campaigns.

All received clemency from Donald J. Trump early Wednesday morning in one of his final acts as president. And Mr. Trump’s choice to use his unchecked clemency power on their behalf highlighted a theme that coursed through the more than 235 pardons and commutations he issued during his presidency — a disdain for a justice system that seeks to hold public officials to account for violations of the public trust.

As the holder of the nation’s highest public office, Mr. Trump regularly expressed resentment about federal prosecutors, the F.B.I. and others responsible for policing official malfeasance, a posture rooted in his own oft-expressed grievance that the system was being used unfairly to target him and his allies and to undermine his presidency.

While he cast himself as a law-and-order president and relished images of himself surrounded by uniforms, he and his aides and allies repeatedly came under scrutiny, most notably during the special counsel’s inquiry into whether he obstructed justice during the investigation into Russia’s interference in the 2016 election and its possible collusion with his team. Throughout his presidency, Mr. Trump’s business, close associates, aides and supporters have come under investigation over a wide variety of issues, sometimes leading to charges of wrongdoing, and his legal troubles did not end with his term on Wednesday.

Mr. Trump cast such investigations as witch hunts or hoaxes, and assailed the officials conducting them as motivated by a political bias, rather than an allegiance to the law.

That theme punctuated the official explanations offered by the White House for clemency grants, and its presence galled government watchdogs, ethicists, public officials and even some supporters of greater use of clemency.

They said they worried that Mr. Trump’s use of the power to reward friends and allies, and to undermine legitimate investigations, ran counter to its intent of showing mercy to deserving recipients without regard to political connections or wealth. While other presidents used their pardon powers expansively, they relied heavily on a formal Justice Department review process that Mr. Trump largely ignored, and none so overtly linked their decisions to their own political grievances.

In announcing the pardon last month of Mr. Trump’s former campaign chairman, Paul Manafort, who had been convicted of financial violations, witness tampering and conspiracy to defraud the United States, the White House noted that his conviction stemmed from the special counsel’s investigation, which Mr. Trump’s aides asserted in their explanation “was premised on the Russian collusion hoax.”

In the final days of his presidency, Mr. Trump talked frequently with Mr. Manafort, an administration official said. Mr. Trump’s chief of staff, Mark Meadows, told associates that Mr. Manafort had been among those urging Mr. Trump not to pardon Mr. Manafort’s former associate Rick Gates. Mr. Gates, who cooperated with the special counsel’s Russia investigation, did not get a pardon.

The White House also invoked the “Russian collusion hoax” in announcing a pardon on Wednesday to Paul Erickson, the former boyfriend of the Russian operative Maria Butina, who was briefly pulled into the investigation of Mr. Trump by Robert S. Mueller III, the special counsel. Mr. Erickson was convicted last July of wire fraud and money laundering related to a business deal in North Dakota.

Mr. Trump’s anti-prosecutor ethos has at times taken precedence over his antipathy for the Democratic Party. While most of the political figures to whom he granted clemency were Republicans, there were several notable Democrats, including Mr. Kilpatrick and Rod R. Blagojevich, a former Illinois governor convicted of trying to essentially sell the Senate seat vacated by Barack Obama when he became president. 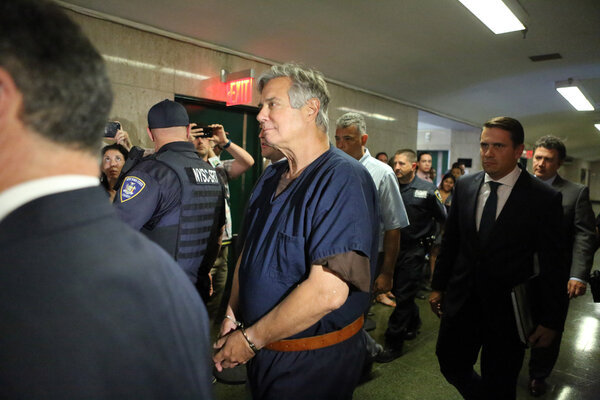 In announcing the pardon of Mr. Blagojevich, Mr. Trump claimed that the former governor was a victim of the same forces that investigated him for years, citing James B. Comey, the former F.B.I. director, and Patrick Fitzgerald, the U.S. attorney in Chicago who prosecuted Mr. Blagojevich.

Within weeks of stepping down as the president’s lawyer in 2018, John M. Dowd, who defended Mr. Trump in the special counsel’s investigation, began marketing himself as a potential conduit for pardons. He told some would-be clients and their representatives that Mr. Trump was likely to look favorably on petitioners who were investigated by federal prosecutors in Manhattan — who regularly took on cases that touched Mr. Trump or his associates — or tarnished by perceived leaks from the F.B.I., which he openly came to distrust and criticize during the Russia investigation.

One of Mr. Dowd’s clients, William T. Walters, a sports gambler convicted of charges related to an insider-trading scheme, had his sentence commuted by Mr. Trump early Wednesday. Mr. Dowd denied that he had boasted to anyone about his ability to obtain pardons and declined to answer questions.

The argument resonated when Ms. Giorno made it in meetings with senior administration officials, she said.

“It was compelling,” Ms. Giorno said. “We were talking about witch hunts back then, and the abuse of power.” She said she did not speak directly to Mr. Trump or lobby anyone in his administration on behalf of her client, John Kiriakou, and no longer represented him. He did not receive a pardon.

President Trump has discussed potential pardons that could test the boundaries of his constitutional power to nullify criminal liability. Here’s some clarity on his ability to pardon.