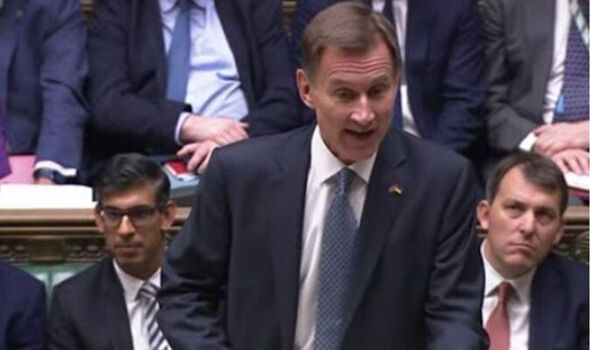 Chancellor Jeremy Hunt is promising a plan to weather an economic “storm” as inflation and the cost of living crisis continues to worsen and affect Britons across the country.

It comes as the Office for budget Responsibility forecasted that the UK’s inflation rate wil;be 9.1 per cent this year and 7.4 per cent next year.

He said in his speech in Commons today: “The OBR confirm that our actions today help inflation to fall sharply from the middle of next year.

“They also judge that the UK, like other countries, is now in recession. Overall this year, the economy is still forecast to grow by 4.2%.

“The OBR says higher energy prices explain the majority of the downward revision in cumulative growth since March.

“They also expect a rise in unemployment from 3.6% today to 4.9% in 2024 before falling to 4.1%.” He noted “today’s decisions mean that over the next five years, borrowing is more than halved”.

He had warned before that the budget would involve “difficult decisions” to tackle the economic climate.

The budget comes a day after the ONS revealed inflation had now reached 11.1 per cent – which is another 40-year high.

The reaction signalled markets are rediscovering faith in UK economic and financial outlook.

The Pound to Dollar exchange rate is currently at 1.1870, down a third of a percent on the day in line with a broader rally in the Dollar.

Gilt yields are near their lowest levels since before the announcement of Liz Truss’ ill-fated budget.

Craig Erlam, Senior Market Analyst, UK & EMEA, OANDA said: “It’s been very choppy throughout the statement. And obviously things to get leaked ahead of these announcements.

“The response seems to be broadly positive, I mean the pound against the dollar traded roughly where it was when Jeremy Hunt first stepped up so that says something about what’s been leaked and what’s new within the announcement itself.

“It also tells you there’s nothing too devastating within that of major concern. You look at the way interest rate expectations have moved throughout the speech; they seem to have edged slightly lower.

“Rates are now expected to peak at around 4 per cent in markets around the summer of next year. That’s very slightly lower than what it was an hour or so ago.

“It seems to be that the measures that have been announecd are relatively well-received. No massive surprises in a political sense but I guess going into the days budget the question is what are the nasty surprises going to be; and going off the markets it seems there won’t be many of those.”

Walid Koudmani, Chief Market Analyst at online investment platform XTB.com said: “Markets seem to be slightly reassured by today’s statement despite a variety of policies that may prove to be unpopular.

“But one thing is clear, the economic backdrop remains negative, at least for the short term with the economy in a recession and a variety of new policies which could impact incomes across the board.”

“There were few surprises – a strict, ‘kitchen sink’ budget had already been priced into the GBP, and bond markets tend to like austerity because it is disinflationary,” said Giles Coghlan, Chief Market Analyst at HYCM.

The tax hikes and spending cuts are expected to lower the UK’s economic growth prospects for the coming years, but, the Autumn Statement from Mr. Hunt has been expected to result in a stronger British Pound, according to analysts.

This is because the market’s reaction to today’s fiscal event will come down to credibility, as opposed to former PM Liz Truss’ growth agenda.

“The Chancellor’s Autumn Statement will instantly be judged by the value of the pound and gilt yields,” says Nigel Green, chief executive of deVere Group yesterday.

“If the pound rallies and the cost of government borrowing falls it will be a win for Sunak’s government.”

Mr Hunt has reversed almost all of the tax measures outlined by his predecessor Kwasi Kwarteng.

In September, Mr Kwarteng announced his “shock and awe” mini-budget, and markets had been very quick to react at the time.

It was followed by days of turmoil in the markets, a fall in the value of the pound and rises in the cost of UK government borrowing and mortgage rates.

Mr Kwarteng had announced £45bn worth of unfunded tax cuts, which inevitably came alongside the prospect of increased borrowing.

The most shocking reaction by far was in the bond market where yields on gilts (UK government IOUs) immediately spiked higher due to the prospect of a big surge in government borrowing.

Additionally, the pound had fallen by three and a half cents against the dollar to a 37-year low, trading below $1.09.

Former Prime Minister Liz Truss had subsequently sacked Mr Kwarteng and acknowledged that “it is clear that parts of our mini-budget went further and faster than markets were expecting”.