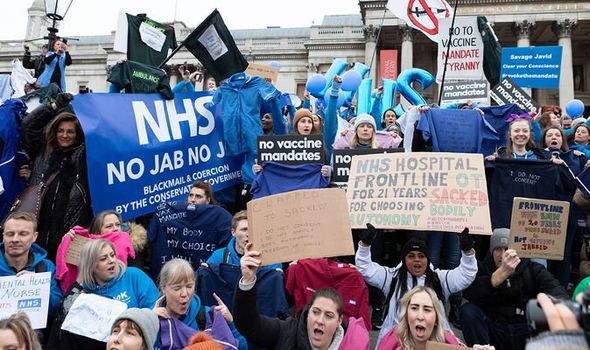 As thousands took to the streets in protest against the policy yesterday, polling for the Sunday Express revealed that 52 percent are against the unvaccinated losing their jobs.

One MP said last night: “After all their effort during Covid, we should not be rewarding NHS staff with the sack.”

According to the Redfield & Wilton survey of 1,500 people, only 29 percent support the sacking of unvaccinated staff.

The vaccine mandate is due to come into effect on April 1, meaning those who have not received a first jab must do so by February 3.

Campaign groups The Together Declaration and NHS100K have warned that more than 100,000 unvaccinated NHS staff, ranging from doctors and nurses to administrators and IT consultants, will be dismissed.

It also emerged that NHS Trusts are being advised by the Department for Health and Social Care to recruit replacement staff from abroad, in anticipation of losing 10 percent of their workforces.

But sources close to Home Secretary Priti Patel, who is responsible for immigration, suggested she had not been consulted on the emergency plan.

With political pressure mounting, the Government was warned it needed to ditch the idea altogether.

The Sunday Express has been told by Government sources that the Prime Minister and Health Secretary Sajid Javid are “considering a pause” in implementing the plan.

Senior Tory MP Mark Harper, the chairman of the Covid Recovery Group, said: “A ‘pause’ is progress but the policy should be dropped.

“After all their effort during Covid, we should not be rewarding NHS staff with the sack.”

Husband and wife Tory MPs Esther McVey and Philip Davies yesterday highlighted the issue on their GB News show, interviewing a doctor and nurse who are set to lose their jobs.

Ms McVey, who challenged the Prime Minister on the issue on Wednesday, said: “Tens of thousands of experienced and accomplished healthcare professionals are prepared to walk away from the NHS rather than be mandated to take the Covid vaccination.

“It would be utter madness for that to be allowed to happen, especially when the Gov- ernment are trying to get down the huge backlog of operations. The Government must see sense and reverse this.”

She said: “With around 90,000 job vacancies across the NHS, we simply cannot afford to lose thousands of our dedicated and experienced NHS staff overnight.”

The Workers of England Union has been involved with giving NHS staff advice on how to avoid getting the sack, with the aid of expert barristers. Other trade unions and professional bodies have also joined the opposition to the plans.

The TUC has called for a delay “to avert a staffing crisis”.

Pat Cullen, the Royal College of Nurses’ general secretary and chief executive, said: “To dismiss valued nursing staff during this crisis would be an act of self-sabotage.”

Martin Marshall, chairman of the Royal College of GPs, told the BBC that compulsory vaccination for health professionals in England is “not the right way forward”. He suggested that a delay would allow “a sensible conversation” about the policy.

More than 100,000 health professionals and members of the public have also signed an open letter to the Government calling on it to reverse the no jab, no job NHS health care worker policy.

One signatory, Professor Allyson Pollock, a public health academic, tweeted: “There is no contradiction between supporting evidenced vaccines and opposing mandatory vaccination. For the last 100 years vaccination has been based on trust, education, informed consent and freedom to choose in the UK.”

However, despite suggestions that the Government is having a rethink on the policy, which was also backed by Labour and Sir Keir Starmer, publicly Mr Javid has continued to insist it will go ahead.

A spokesman for the Health Secretary said that while the poll showed opposition, other surveys have shown strong support.

A Department of Health and Social Care spokesman said: “NHS and care staff do amazing work and we are thankful to those who have chosen to get the vaccine .

“Health and Social Care workers are responsible for looking after some of the most vulnerable people in society, many of whom are more likely to suffer serious consequences if exposed to the virus.

“This is about patient safety, and ensuring people in hospital or care have as much protection as possible. Vaccinations remain our best defence against Covid-19.”

Protesters against the policy marched to the BBC headquarters in London and then to Whitehall. One of those was NHS consultant Steve James, who challenged Mr Javid over the policy earlier this month on live television when the Health Secretary visited a London hospital .

The deputy lead for the NHS Covid vaccination programme, Dr Nikki Kanani, was asked what she would say to staff who are protesting against mandatory vaccination.

She replied: “I think it’s a really difficult time for some people to make a decision that is fundamentally about protecting them and their families, and their communities.

Asked if patients will suffer if the NHS loses staff due to mandatory vaccination. plans, she said: “As we’ve seen through the pandemic, and of course those days before the pandemic that we don’t even think of very often, our NHS continues to deliver.

“What I want to say is to our patients who are listening, we will keep looking after you.

“That’s what we do in the NHS. Our general practice teams, our pharmacy teams, our healthcare services.”