UK Brexit envoy Lord Frost was said to be prepared to lower his demands for future fishing quotas if Brussels agrees to back down in other areas of the agreement. Sources close to the talks say the UK is now willing to accept between 30-35 percent of the £590million worth of fish caught by European boats in our coastal waters this year. Downing Street was previously insisting on reclaiming as much as 60 percent for British fishermen with the EU setting its price for a deal at 25 percent.

EU officials have been floating the compromise across hardline states, such as France and Denmark, to establish whether Michel Barnier has further room to manoeuvre.

But it is feared the wrangling could still collapse over the EU’s demands to slap Britain with punitive tariffs if the Government decides to restrict access for European vessels to UK waters.

The two sides still need to reach an agreement for the length of a transition period, during which generous catch shares European trawlermen enjoy would be gradually phased down.

Britain has said it would accept a three-year period while the EU was asking for a the new arrangements to be phased in over seven years.

Chances of the compromise offer ending in a deal hinge on Emmanuel Macron.

An EU diplomat yesterday said the French President would block any future concessions because he feels too much ground on the totemic issue has already been given. 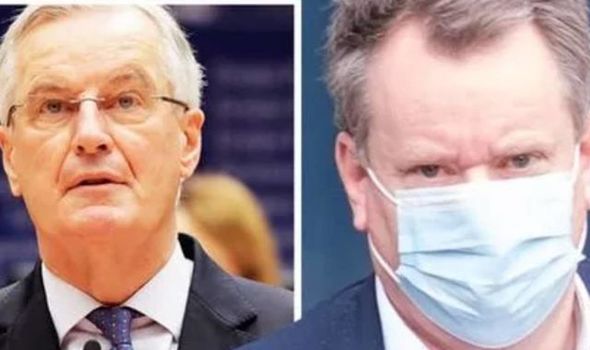