WASHINGTON — Six years ago, the American diplomat Wendy R. Sherman made her mark on the world stage by negotiating a landmark nuclear deal with Iran. Reviving that agreement, after the Trump administration all but scuttled it, is a top priority for President Biden.

Yet even as new Iran talks continue in Vienna, Ms. Sherman, named by Mr. Biden as the first woman to serve as deputy secretary of state, has largely shifted her attention to another complex and daunting challenge: helping to manage the tense relationship between the United States and China.

The pivot puts Ms. Sherman at the center of the kind of high-stakes, low-boil diplomacy that has become her hallmark after building a shrewd and tough reputation over four turns at the State Department beginning in the 1990s.

It is also an opportunity to test in a different venue what Ms. Sherman learned over years of arduous negotiations with Iran: that being emotionally honest with potential adversaries can be more formidable than presenting a poker face.

These “are not relationships about trust,” Ms. Sherman, 71, said in a recent interview, when asked about Mr. Biden’s developing strategy for China. “They are relationships about respect. You can gain respect for each other’s interests, and you ensure that your interests are met.”

Will that be possible with Beijing? “I think we’re going to find out,” said Ms. Sherman, who returns to Washington on Friday after 11 days of meetings in Asia and Europe, largely to discuss China.

Striking a balance between standing firm yet still appearing approachable is no easy task for women in positions of authority who are often seen as weak for revealing any sign of vulnerability.

Ms. Sherman, however, has said she found power in showing her personal side in even the most delicate moments of diplomacy.

The Iran negotiations in 2015 were a case in point.

At the time, progress in the painstaking talks was measured in tiny advances over technical details. Compromises among world powers were often difficult to nail down, and Iranian officials frequently waited until the last minute to object to issues when all other negotiators believed a deal was nigh.

But amid the strained meetings, Ms. Sherman swapped stories about grandchildren with Iranian officials. They sent each other holiday cards and shared meals over months of ironing out the complexities of curbing Tehran’s uranium enrichment in exchange for relief from economic sanctions.

And, as she tells it, Ms. Sherman teared up out of frustration while discussing a key sticking point with Iran’s diplomats, stunning them into accepting a necessary part of the eventual agreement.

In the interview, Ms. Sherman said the tears were authentic if unplanned, and she would not recommend them as a negotiating tactic. But, she has said, they proved to the Iranians that she had nothing left to give and that they were endangering the entire deal.

To others involved in the talks, Ms. Sherman looked anything but weak.

“She formed strong relations with the others,” said Catherine Ashton, the European Union’s former foreign policy chief and its top negotiator at the nuclear talks. “The Iran team were aware of how smart she was, and that she was determined on a good outcome and not prepared to settle for less.”

She also kept up her aura of inscrutability when necessary.

“She’s completely impossible to get information from,” said David Albright, the president of the Institute for Science and International Security and a former weapons inspector who has criticized the 2015 deal. “Unless it’s been approved to reveal, she does not.” 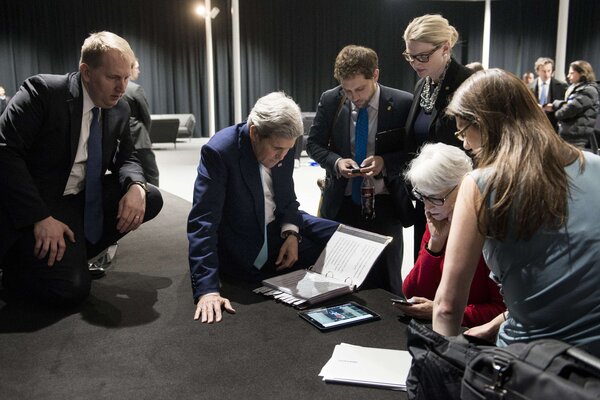 While Ms. Sherman is watching the current Iran talks from afar — “As deputy, I pay attention to everything,” she said — she is no longer involved in the daily negotiations as the United States seeks to rejoin the accord that former President Donald J. Trump abandoned in 2018. Diplomats from Britain, China, France, Germany, Russia, the United States and Iran are expected to return late next week to the talks in Vienna for what some officials predict could be a breakthrough.

In working with allies to develop a united front in dealing with China — a strategy that could shape global norms for decades to come — the challenge could not be greater and the stakes could not be higher.

Beijing is confronting the United States on nearly every front, from military aggression in the South and East China seas to a cooling trade war to human rights abuses by a government that is asserting its authoritarian values worldwide.

And as Secretary of State Antony J. Blinken bounces between crises in the Middle East and with Russia, and smooths relations with European partners who were sidelined by the Trump administration, Ms. Sherman is making sure that the emerging policy toward China remains at the fore.

Working-level communications between the United States and China are ongoing, she said, and “we’re going to slowly, step by step, engage when it’s in our interest.”

The focus “says to not only to China, but to other countries around the world, we are going to lead in this space,” Ms. Sherman said. “We’re going to compete and be as robust as anybody else, in an effort to win the competition.”

It is but one of her many roles as the deputy secretary of state.

Returning to the State Department this year, she encountered a work force that was gutted, both in staffing and morale, during the Trump administration. Rebuilding the ranks with more women and people of color in positions of power, she said, will take time.

Although three women — Madeleine Albright, Condoleezza Rice and Hillary Clinton — have served as secretary of state, white men have traditionally held the most senior jobs at the State Department.

But that is changing, Ms. Sherman said.

“Look at this room — we have three women sitting here, one of whom is a woman of color. And one white guy,” she said during a candid moment, motioning to a reporter and two staff members who were sitting nearby, in a meeting room outside her personal office.

She credited both Mr. Biden and Mr. Blinken with trying to diversify America’s overwhelmingly white diplomatic corps. And while “all institutions are hard to change,” Ms. Sherman said, “this one is particularly hard because national security and foreign policy haven’t been a place for women, let alone people of color.”

“That’s not the way the world should be,” she said.

Her approach is a rejection of both the swagger that Mike Pompeo, who served as Mr. Trump’s second secretary of state, tried to impose on America’s diplomatic corps, with little success, as well as his ridiculing of multiculturalism.

Yet Ms. Sherman is no pushover, and her no-nonsense attitude has unnerved many in her wake.

“She’s this consummate professional who has a bit of a sharp edge to her, so you knew you had to be well-prepared or you’ll see the door pretty quickly,” said Rose Gottemoeller, a former under secretary of state for arms control and international security, who worked with Ms. Sherman at the State Department during the Obama administration. “She came right back at you with zinger questions.”

Ms. Gottemoeller also recalled Ms. Sherman going out of her way to advise and support a fellow colleague through a daunting health issue. “I really was a bit surprised that she’d gone to those lengths, but to me, that shows her empathy,” said Ms. Gottemoeller, who most recently served three years as the deputy secretary general of the North Atlantic Treaty Organization.

Ms. Sherman is as open in dissecting her own disappointments as she is in counseling others about theirs. And while she is the first woman deputy secretary of state — a fact that is “a little ridiculous,” she said, given the position was established in 1972 — this is technically not the first time she has held the job.

In 2014, during the Iran negotiations, she was quietly told she could expect to be nominated for the position after William J. Burns, the current C.I.A. director who was then the State Department’s deputy, retired that year.

Instead, the position went to Mr. Blinken, her current boss, whom she had known since the Clinton administration, when she was an assistant secretary of state for legislative affairs and he a White House speechwriter.

The letdown “was devastating,” she said. “It was really tough.”

However, she asked that the White House appoint her as the acting deputy until Mr. Blinken took over in January 2015. It was a temporary consolation, to be sure, but also an important way to show other women “they can be whatever they hope to achieve,” she said.

“What I hope is that by being the first, I have opened the door to the many — that everybody here can see themselves to be anything,” Ms. Sherman said.

And when Mr. Blinken was nominated last year to be the top diplomat, “he called me and he said, ‘There’s only one person I want to be my deputy — will you do it?’” Ms. Sherman recalled.

“And I was honored,” she said.