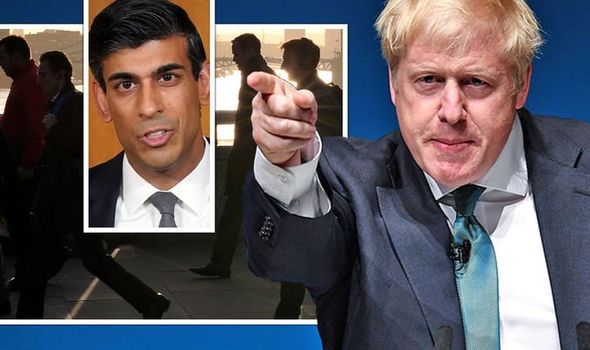 Boris Johnson has ordered civil servants return to their desks to lead by example after thousands stayed away despite a change in the rules. Ministers urged the rest of the country to head into their workplace the “sooner the better”.

Whitehall mandarins and Cabinet ministers have been told to ensure that all government offices are open “so people can return to normal working practices as soon as possible”.

“That’s what the Prime Minister continues to want to see,” a No 10 spokesman said. “We are working across government to ensure people across the civil service can start to return if they are not already in the office.”

The order was issued after Whitehall remained deserted despite working from home guidance being lifted.

Cabinet Office Minister Steve Barclay is leading the charge to get civil servants back into their offices as quickly as possible.

He wants departments to “lead the way” in a return to office working.

Whitehall will be told the “ministerial expectation” is for staff to turn up and departments will monitor office use.

He said: “Now we are learning to live with Covid and have lifted Plan B measures, we need to move away from a reliance on video meetings and get back to the benefits of face-to-face, collaborative working.

“I’m grateful to the Civil Service for managing the challenges of the last two years.

“It is important that we now see the maximum use of our office space being made from next week, as we build a strong recovery after the disruption of the pandemic.”

Although many civil servants remained in the workplace to help steer the country through the pandemic, the government believes it is “vital” that more staff return so they can once again “benefit from collaborative working”.

Cabinet Office Permanent Secretary Alex Chisholm has written to leaders across Whitehall asking them to support a “significant and swift” return of staff to the workplace.

Mr Barclay will also raise the issue at Cabinet next week and will urge ministers to make sure their offices are working at full capacity as soon as possible.

The government hopes the move will help boost the economic recovery by increasing spending at sandwich shops, pubs and bars around offices.

Many companies switched to permanent hybrid working or full working from home as a result of the pandemic.

Many businesses in the City of London remain shuttered and whole floors of towers in Canary Wharf remain empty.

Business Secretary Kwasi Kwarteng estimated only half of his department’s staff are back in the building. “We should get back to work,” he said. “We’ve got to get back to some degree of normality.”

“People working in the office do get benefits from working with colleagues, being able to interact directly with them and I want to get back to a sense that, you know, that the pandemic is turning from a pandemic into an endemic.”

Mr Kwarteng said coronavirus is “something we have to live with”.

“And if we are going to live with it, I think the sooner we get back to the pre-Covid world the better in terms of workplace practices,” he added.

Prime Minister Boris Johnson told MPs in the Commons on Wednesday that work-from-home guidance would be dropped immediately.

Road congestion levels increased slightly in London on Thursday, up from 66 percent the previous week to 72 percent and up by seven percent in Manchester.

But some cities recorded a fall or remained the same including Birmingham, Brighton, Hull, Leeds, Leicester and Liverpool.

Central London saw a footfall increase of 3.7 percent on the previous week.

Stuart Rose, chairman of supermarket group Asda, said he had been working at the office throughout the pandemic.

“I cannot believe we have a nation sitting at home now cowered by this government,” he said “It is something we have to now live with.”

“The obsession of ministers with where somebody’s desk is located, rather than the work they are doing, is entirely counterproductive, and simply a distraction from events elsewhere

He added: “Time and again, ministers, including the Prime Minister, talk about people going back to work.

“People have been working the whole time. It’s more than just a slip of the tongue, it’s a mindset amongst ministers that when people are at home, they are not actually really working whereas the civil service and private sector have demonstrated that’s not the case.”

A spokesman for the PCS union said: “There should not be a reckless, headlong rush to increase numbers at workplaces.

“Instead, there needs to be a properly planned approach, which allows the employer and the union to negotiate safe arrangements.”