Boris Johnson the Brexit populist, or so the labelling goes.

His sidekick Michael Gove declared during the 2016 referendum that we’d all had enough of experts who got things “consistently wrong”.

But our apparently “populist” prime minister is taking a studiously non-populist approach to the “worst public health crisis for a generation”.

Ever since coronavirus landed in the UK, he has followed the advice of the experts.

It feels at times that his unflappable chief medical officer Professor Chris Whitty and chief scientific adviser Sir Patrick Vallance are always by his side.

With an already alarmed public, anxiety can only grow now that the prime minister put it on record today that he was powerless to stop this pandemic spreading across the UK, as he warned us that our loved ones are likely to die “before their time” as COVID-19 grips our nation.

Prof Whitty told me at the Downing Street press conference on Thursday that the “reasonable worst-case scenario” was that 80% of Britain’s 66 million population would be infected, with an expected mortality rate of 1% or less. That amounts, at worst, to half a million deaths.

Around the world governments are taking drastic measures.

US President Trump has banned flights from the EU, French President Macron is closing schools on Monday while Italian Prime Minister Conti has put the whole of Italy on lockdown.

It all piles the pressure on Mr Johnson to be seen to taking similar actions to make us all perhaps feel a little more safe.

But those populist instincts are in abeyance as the prime minister sticks to the scientific advice despite some political and public backlash that it is too little too late.

The government on Thursday issued new advice for us all as we move into a new phase of this epidemic, with community transmission increasing.

All those who feel unwell – with a persistent cough, a temperature or both – should stay at home for seven days. The elderly should avoid cruises and school children’s foreign trips are now banned. 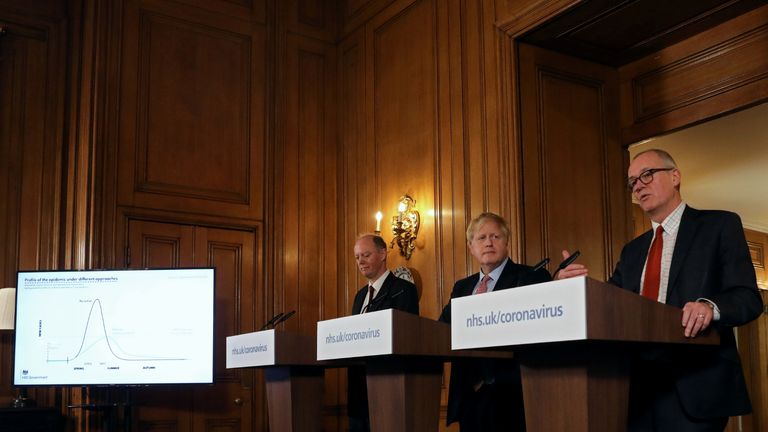 But other measures in the government’s own coronavirus action plan such as shutting schools and curtailing big gatherings are still on the shelf – for now.

The experts have modelled the progression of the virus and are timing their interventions to prevent a flagging of enthusiasm at the peak of the spread.

Their central aim is to pull down the size of the peak (which could come in 10 to 14 weeks’ time) against the point where the NHS has the most capacity.

Maximum strain is much better in the summer than in the winter when the health services are already chronically stretched.

The government also needs a proportion of the population to contract the virus in order to build up some immunity.

Totally suppressing it may well only serve to bring in a second wave later in the year when the NHS is under more strain from seasonal flu.

As the virus spreads, the experts will unleash new measures to try and slow and contain transmission: They will ask the elderly and vulnerable to self-isolate, they will ask us to work from home, they might begin to stop big social gatherings or even, eventually, close schools.

The overall aim is to reduce the numbers at the peak of the virus by 20% and delay that peak by two to three weeks, into the summer months.

But it all comes, of course, with great risks.

By accepting that the majority of the population should, over a period of weeks, be exposed to the virus there is the obvious risk that the NHS will become completely overwhelmed.

When the crisis is over, those experts – and perhaps the prime minister too – will either be asked why they went to such extreme measures over the course of the outbreak or why they didn’t move fast enough early enough.

They may well be asked a bit of both.

Planning for a new, unknown pandemic, is never an exact science – however good our experts might be.

We are all about to step into the unknown.