The government is facing calls to curtail the period of time its emergency coronavirus powers are in force.

A cross-party group of MPs has tabled an amendment to the Coronavirus Bill, demanding the powers outlined in the legislation expire after six months and can only be renewed further with the approval of parliament.

Downing Street wants the provisions to remain in force for up to two years as it bids to fight the spread of COVID-19, the disease caused by the coronavirus.

Ms Harman told Sky News the “exceptional” powers were necessary, “but two years is too long”.

The MP for Camberwell and Peckham explained: “This amendment asks the government to change the bill so the powers last for six months and then can be renewed with the approval of parliament or, if parliament is not sitting, select committee chairs.

“There is a lot of backing for this so I hope the government will listen.

“No one wants to stop them getting the powers they need to keep us all safe, but we need them to last no longer than is necessary.” 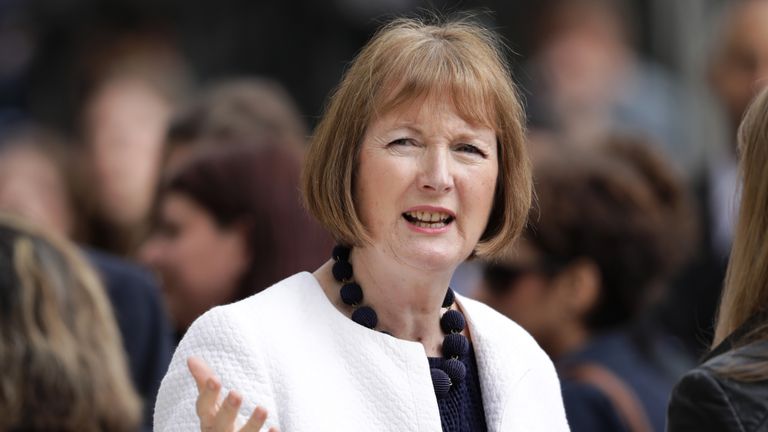 The legislation is set to be debated and passed in the Commons on Monday, before going to the Lords later next week.

Given the government enjoys a majority of 80, the amendment is unlikely to pass.

But it is an indication of the disquiet among some MPs at the potential long-term ramifications of the legislation.

Health Secretary Matt Hancock said on Tuesday that the new powers “will only be used when it is absolutely necessary and must be timed to maximise their effectiveness”.

“Crucially they give the government the powers it needs to protect lives,” he added.

The 329-page bill allows ministers to take action to increase the available health and social care workforce, reduce the burden on frontline staff, slow the spread of the virus, manage the deceased with respect and support people through the COVID-19 pandemic.

It also sets out powers for the police to detain people suspected of having coronavirus and send them for testing. People who fail to comply could be hit with a fine of up to £1,000.

In addition, the government will have the power to write to an operator of a port, requiring their operation be suspended and for events or gatherings to be cancelled.

There are provisions relating to the UK’s food supply, with suppliers having to provide information to the appropriate authority if all or part of a supply chain is being disrupted or is at risk of disruption.

Coroners will be able to conduct an inquest without a jury for anyone whose death is caused by coronavirus.

Councils, meanwhile, will be given the power to decide what happens to dead bodies and their disposal.

This is to make sure that excess deaths do not overwhelm the system.

Funeral directors will be able to act on behalf of a family and register a person’s death.