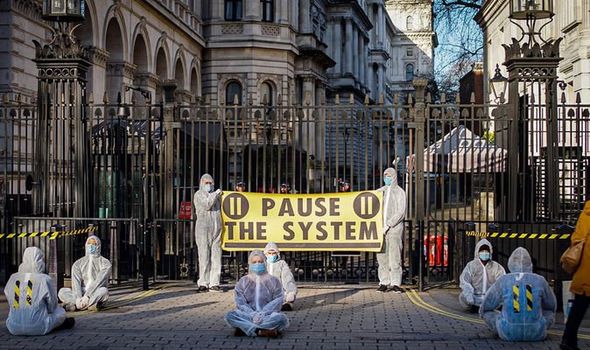 Several members of the group sat on the ground outside the gates of No10 while others held a banner that read “Pause the system”. The action comes just hours before the Prime Minister is due to hold his first daily televised briefing on the epidemic following widespread criticism. Armed police in the grounds of the compound looked on as activists hung biohazard tape on the railings and staged a peaceful protest.

Campaigners from Pause the System are demanding the government implement strict measures to prevent Covid-19 spreading across the UK, by closing schools, halting all non-essential business and ushering in a system of social distancing.

The group are also calling on leaders to tackle the threats of future pandemics emerging from the climate crisis and factory farming.

Spokesman Dan Kidby said “Universal basic income, full statutory sick pay, and the pausing of mortgages and rents, ensures that everybody in society can be truly cared for, and get the financial support they need.

“In the long-term it will also help us reduce inequality and get back on our feet after COVID-19 passes.”

Eight protesters marched down Whitehall during rush hour on Monday to draw attention to the fact that the UK has not followed other European countries in imposing stringent measures to try to contain the virus and prevent it from spreading.

Pause the System wants to see the UK  be put into lockdown to proactively respond to the epidemic which has seen 1,391 Britons infected.

Thirty-five people in the country have so far died of the viral disease.

The group believes the government has so far failed to step up to the mark when it comes to responding to the crisis which Mr Johnson called “the worst public health crisis for a generation”.

Spokeswoman Kerri Waters added: “The science is clear, unless we act now on climate breakdown and end factory farming disastrous pandemics will be commonplace.

“Covid-19 has shown us how vulnerable our society is to the threat of pandemic and we need to take every necessary measure to protect us in future. This means changing our whole system.”