An MP has been handed a suspended jail sentence after threatening to throw acid at her partner’s female friend and to send naked photos to her family.

Claudia Webbe, 56, was found guilty last month of harassing Michelle Merritt after also making threatening phone calls to her under the guise of lockdown having to be “adhered to strictly”.

The independent Leicester East MP, who was suspended by the Labour Party after she was charged, was accused of threatening to send naked pictures of Ms Merritt, 59, because she was jealous of her friendship with Webbe’s partner Lester Thomas.

Webbe has been handed a 10-week custodial sentence suspended for two years.

She must also complete 200 hours of community service, pay £2,000 in costs and £1,000 compensation, but an application for a restraining order was not granted. 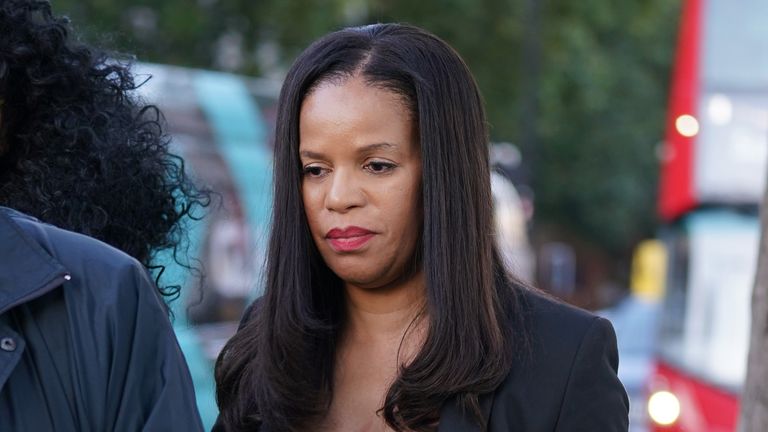 Her actions were described as “callous and intimidatory” by the chief magistrate, who added that she would have been jailed immediately were it not for her previous good character.

Webbe remains as an MP because her sentence is below a year but Sky News understands Webbe will appeal her sentence, meaning she cannot be recalled by her constituents during that process.

However, if all appeal avenues are exhausted and unsuccessful she can be recalled as long as 10% of her constituents sign a petition for her removal, which would then prompt a byelection.

Webbe made a series of short and silent phone calls to Ms Merritt, called her a “slag”, and threatened her with acid between 1 September 2018 and 26 April last year.

The MP denied the allegation and said she only called Ms Merritt as a “courtesy” because she was annoyed she had been breaching lockdown rules with Mr Thomas.

Some of the phone calls had their number withheld, but some did not as Webbe had dialled “121” before Ms Merritt’s number instead of “141”, which withholds the caller’s number.

In a victim impact statement ahead of sentencing, Ms Merritt said she was “very scared” of Webbe, she feels “unsafe” in her home and has had “sleepless nights” because of the harassment she endured. She said the harassment has “cast a huge shadow over all areas” of her life and fears the “repercussions” of what Webbe will do next.

In an emotional statement behind a curtain at Westminster Magistrates’ Court, Ms Merritt added: “No woman should be threatened or harassed the way Miss Webbe has done to me over the years, let alone a politician.”

Sentencing Webbe, Chief Magistrate Paul Goldspring said Webbe launched a “campaign of harassment” because she was jealous of Ms Merritt, adding that her behaviour had meant to “cause real harm and distress”.

He said she showed “little remorse or contrition” and threatening Ms Merritt with acid amounted “to a threat of very serious violence”.

While finding her guilty last month, Mr Goldspring said he believed some of the things Webbe said in court were “made up in the spur of the moment”.

“Her explanation was frankly incredible, and I do not believe it,” he added.

Following the guilty verdict, Webbe said she was “deeply shocked”, insisted she was innocent and that a recording of one of the calls during lockdown had “been taken out of context”.

Webbe vowed to continue to represent her constituents in Leicester East and said she would appeal the verdict.

“I was pointing this out, I am the victim,” she said. She said she did not report them to the police because she “gave up because they continued to meet up long after April”.

During one phone call, Mr Thomas could be heard asking Webbe: “Are you mad?”

But Webbe said: “I’m not mad, I’m a member of parliament.”

The MP also told the court she felt like a “victim” due to the amount of abuse she received on social media.

Former Labour leader Jeremy Corbyn and former shadow chancellor John McDonnell provided character statements to the court in which they respectively said she was a “person of good character” and an “honest, responsible and an extremely caring person”.

Webbe entered the Commons in December 2019, winning the seat formerly held by Keith Vaz, the married Labour veteran who did not stand again after being suspended from parliament for “expressing willingness to buy cocaine for male prostitutes”.

Webbe was a political adviser to then-London mayor Ken Livingstone, worked as a councillor in Islington between 2010 and 2018, and was a member of Labour’s ruling National Executive Committee.