The European Commission said on Monday it had launched legal action against the pharmaceutical giant for failing to respect the terms of its contract with the 27-nation bloc. The move comes as Brussels has been embroiled in a bitter row with AstraZeneca over supply shortages, while some European countries have restricted use of the jab to older age groups amid fears over rare blood clots.

But Express.co.uk readers fumed the EU’s legal action was “pure spite” and “despicable”.

And others pointed out that it comes after AstraZeneca promised not to profit from its vaccine during the pandemic.

Commenting on this website, one reader blasted: “This is shameful in the extreme. Pure spite. Boycott.”

Another wrote: “Sue AZ over a vaccine they don’t want to use and is being wasted, when it could be saving lives in India!!!” 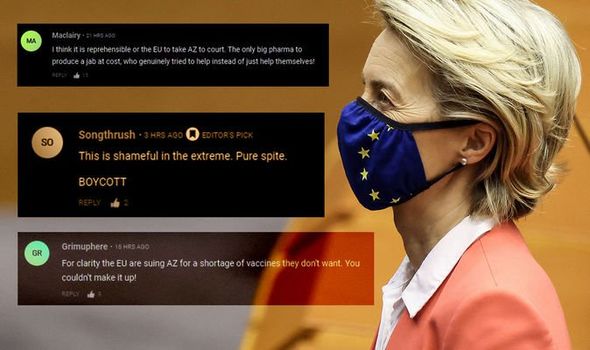 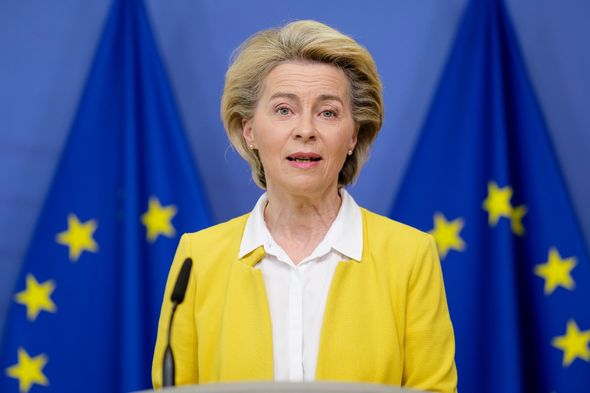 A third said: “Truly sickening response from the EU. They really have lost the plot. What a nasty bunch.

“In the midst of a global pandemic they want to sue one of miracle vaccine pioneers.

“Utterly mad. Thank God we are out of the EU.”

Another commented: “The only company providing vaccines at cost price, the only company not making a huge profit out of this tragedy so that every nation can afford to vaccinate their population and this is how the EU treats them?! It’s despicable!”

A fifth posted: “I think it is reprehensible or the EU to take AZ to court.

“The only big pharma to produce a jab at cost, who genuinely tried to help instead of just help themselves!”

One more added: “For clarity the EU is suing AZ for a shortage of vaccines they don’t want. You couldn’t make it up!”

On Monday, a European Commission spokesman said the legal action was launched last Friday with the backing of all 27 member states. 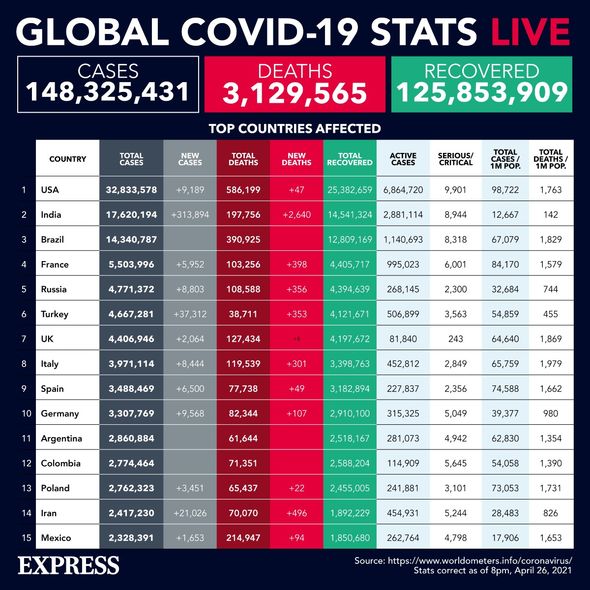 “We want to make sure that there’s a speedy delivery of a sufficient number of doses… which have been promised on the basis of the contract.”

Health Stella Kyriakides tweeted: Our priority is to ensure COVID-19 vaccine deliveries take place to protect the health of the European Union.

“This is why the EU Commission has decided jointly with all Member States to bring legal proceedings against AstraZeneca.

One EU official told Reuters that the legal action was taken to “send a message” to AstraZeneca’s chief executive Pascal Soriot.

AstraZeneca said the move was “without merit” and pledged to “strongly defend itself in court”.

The EU’s legal action comes after it has faced intense criticism over its slow and chaotic jab rollout.