The Prime Minister is already paving the way for Britain to leave the bloc on WTO terms at the end of the year and spoke to business leaders yesterday to stress the “fantastic opportunities” which awaited during a conference call with 250 business leaders. However, Brexiteer John Redwood – a leading light in the eurosceptic European Research Group – said a deal was still possible provided the bloc showed the necessary flexibility.

He tweeted: “So the EU now wants to talk. No point unless they drop their demands to carry on making our laws, taking our fish and putting us under the control of their court.”

Speaking yesterday alongside Michael Gove, who as Chancellor of the Duchy of Lancaster is playing a leading role in the process, Mr Johnson said: “Our job is to create the platform for dynamic businesses such as yours to compete and to grow.

“But it is vital that everybody on this call takes seriously the need to get ready, because whatever happens – whether it’s Canada or Australia – change is going to happen.

“There is a big opportunity for this country and we want to help all of you to seize that opportunity.” 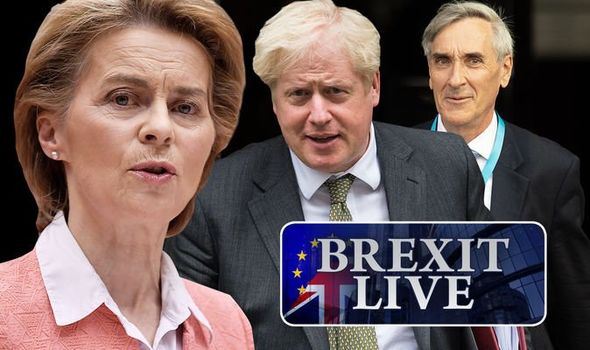 Speaking earlier this week, former Brexit Party MEP Ann Widdecombe told Express.co.uk she was highly dubious about the prospects of any meaningful progress.

She explained: “At the moment there are three big sticking points – fishing, the level playing field and state aid.

“It only appears to be France with fishing – I think the rest of the EU would probably come to a reasonable solution.

“But as far as I can see on the other two points there is no movement at all from the EU.”

[SCROLL DOWN FOR FURTHER UPDATES]

7.48am update: Lack of data-sharing will leave police “unable to cope”, warns peer

British police will be “increasingly unable to cope” under a no-deal Brexit, with long delays in investigations due to the loss of data-sharing agreements with the EU, the Government has been warned.

Lord Anderson, a former independent reviewer of terror legislation, has said he is growing increasingly concerned about the impact a no-deal departure would have on Britain’s ability to fight cross-border crime.

His warnings came as UK-EU talks remained stalled for a fifth straight day on Tuesday.

The crossbench peer told the Guardian: “Without the ability to exchange data and intelligence across frontiers, law enforcement will be increasingly unable to cope.

“Everything from extradition to notification of alerts, crime scene matches and criminal record searches will be much slower, at best.”

Boris Johnson has urged businesses to accelerate preparations for a no deal Brexit.

The Prime Minister insisted the UK will prosper outside the EU with or without a trade deal.

Boris Johnson stressed while companies have been “terribly busy with Covid”, they must now get ready for the end of the Brexit transition on December 31.

Michael Gove, who appeared alongside Mr Johnson on the 21-minute call, likened Brexit to moving house – initially expensive but with long-term benefits.

The Prime Minister and Mr Gove spoke to 250 business leaders in the video call.