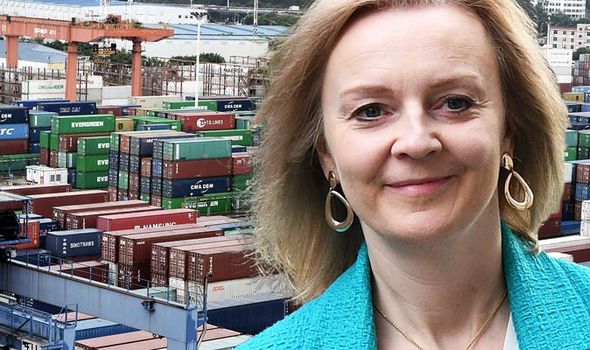 The International Trade Secretary says the UK is well placed to increase its sales with the world’s fastest-growing economies.

In a speech she will say just one in ten firms export overseas but it should become “the norm”.

Building trade links with eastern nations is expected to play a crucial role in levelling up the country by lowering prices and increasing wages.

“The path to economic revival does not lie in retreating and retrenching,” Ms Truss will tell the Policy Exchange think tank.

Analysis published today by the Department for International Trade found the centre of global economic gravity is moving away from Europe in favour of the Indo-Pacific.

“In order to seize the opportunities of the future, we need to grow trade with the fastest-growing parts of the world while turbocharging digital and services commerce – which is exactly what we’re doing,” Ms Truss said ahead of the speech.

“We are building a global network of next-generation trade deals that are advanced in services and digital trade, and forge closer economic ties with markets in East Asia and the Asia-Pacific.

“We know the demand for high-quality British goods and services exists, and is growing, therefore we need to ready British businesses for export and bolster inward investment across the country; creating new jobs, business and growth.”

Between 2000 and 2019, the region accounted for half of global economic growth in real terms compared to 10 percent for the EU, according to the Global Trade Outlook report.

By 2030, three of the four largest economies in the world will be in the Indo-Pacific region, the report forecasts, with the region set to account for 56 percent of global GDP growth and 44 per ent of global import demand growth over the next 30 years.

Demand for British digital and financial services is expected to double in the next decade.

The report found the EU and North America’s share of global production is expected to fall in almost all sectors out to 2030.

Trade with countries with a growing middle-class population is viewed as key to boosting Britain’s growth in the coming decades.

Ms Truss believes that increasing free trade with those nations will lead to higher-wage, high-growth and high-productivity in British businesses and spread wealth across the UK.

A government source said: “Liz believes more free trade and more free enterprise can help narrow the gap between London and the rest of the country by delivering lower prices and higher wages.

“She’s targeting more trade with the fast-growing parts of the world beyond Europe and is focused on future-facing industries like science and tech in particular as the key to levelling-up.”

The UK is in negotiations to join the group of 11 countries Comprehensive and Progressive Agreement for Trans-Pacific Partnership (CPTPP), which includes New Zealand and Australia as well as Canada, Japan and Singapore.

The bloc includes some of the world’s biggest economies as well as those on the rise in an area with a population of half a billion.