The Prime Minister said the British people are “heroic” and will get through the winter cost of living crisis before the country bounces back “strongly”. Mr Johnson insisted the UK has the cash it needs to help even higher earners but the bulk of the support must be targeted at those who need it most.

But he predicted the situation will improve by the middle of next year and said he is “full of confidence” about the UK’s future.

And Mr Johnson revealed he intends to campaign to keep support united for Ukraine because President Zelensky is “keen for me to keep my hand in somehow”.

Despite being forced out after dozens of colleagues brutally turned on him, the premier insisted he remains loyal to his party and will “be there to help” the next occupant of No 10 in “anyway I can”.

But reflecting on his own record in his swan song interview with the Daily Express, Mr Johnson said he stuck to his promises during his three years in the job.

“I’m proud of the things that we did,” he said.

“I did deliver what I said I was going to do. Our goals were to deliver Brexit, unite the party, defeat Corbyn and energise the country and I think we did that.”

Mr Johnson said there was a “massive” list of things the government is doing at the moment, from building more hospitals, to putting in high-speed railways and changing planning laws to increase home ownership.

“We’re doing things that will make a massive, long-term difference like changing all the laws so that we can take advantage of Brexit,” he added.

“I know that both candidates are going to grab the torch. They’re gonna run with it. I think that the opportunities are immense. 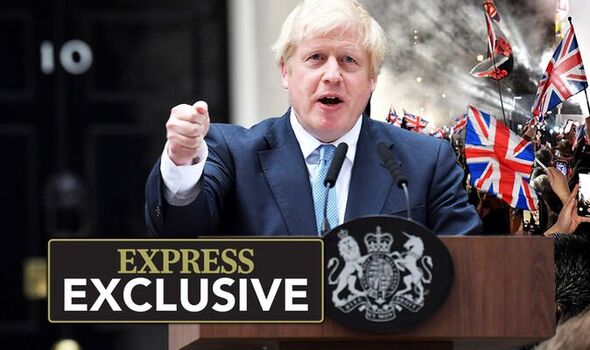 “When I look ahead, I’m definitely full of confidence.

“Express readers get it, I know that things are tough now but I think they will get better.

“By the middle of next year things will get much much better but we’ve just got to get through it.”

Mr Johnson, who will hand over to a new Tory leader and Prime Minister next week, said there are amazing opportunities for the next PM as well as the “huge” challenge of the cost of living crisis.

But he said there is a “clear way through” and the money is available to help support those who need it.

He said: “I don’t comment on the events of the last few weeks except to say, I wish both candidates the very, very best.

“And I think that the opportunities they have are amazing. I think the challenges are huge because of the cost-of-living crisis. “But we will get through that. And there is a clear way through. We have the cash we need to help people.

“We’re going to keep helping people. We’re going to help people of all income groups and you can see you know that we’re all we’ve already been doing that just like clearly, morally and realistically, you have to direct your fire, the bulk of your support at those who need it most. Everybody understands that.

“After that we will bounce back very strongly.”

Mr Johnson entered office in July 2019 after Theresa May’s government ground to a halt after years of Brexit wars in Parliament.

The Prime Minister later called an election to break the deadlock and negotiated the Brexit deal that the country had been waiting for since it voted to Leave in 2016.

Weeks after the ink was dry on the historic agreement, the country was hit by the covid pandemic and Mr Johnson was left to steer the country through a crisis unprecedented in modern times.

He said it has been a “really action-packed time” with challenge after challenge but “we kept dealing with them”.

“I have no doubt that we’ll deal with the problems of the cost-of-living crisis, which is, I think, the biggest thing,” he said.

“But look at what we’ve already dispatched – we had to react to the total political paralysis, which we managed to get through and to get Brexit delivered, when we had the worst drop in output for 300 years caused by the pandemic.

“Now, the war in Ukraine has triggered this cost-of-living crisis but we will get through it and we will win.”

“I’m proud of the things I was able to contribute. God knows we got some things wrong but we got a lot of big things right. I think, overall, we’ve put in long-term changes that will be massively for the better in this country.”

Mr Johnson’s pivotal role in leading the West’s response on Ukraine has led to a close relationship with President Zelensky, who he visited last week.

“I saw him just the other day, and he’s keen for me to keep my hand in somehow and, you know, I’m not going to be a part of the new Government and to be clear about that, but I will obviously continue to campaign for Ukraine.

“I can tell you something, Liz and Rishi and I are absolutely at one on the whole thing. I was able to reassure him that there’s going to be no difference in British policy.

The PM offered “open support” to either Liz Truss or Rishi Sunak.

“I’m going to be there to help them, to support in any way I can and I mean that – it’s open support,” he said.

Mr Johnson said it was “tbc” over whether he would attend the Conservative conference this year.

He urged whoever takes over to continue the levelling-up agenda and positive vision for Britain.

“I just think we need to remember the opportunities that are ahead and to be confident and both candidates I know get that,” he said.

“So, levelling-up, seizing Brexit opportunities, believing in Britain, they’re going to go for it.”

Mr Johnson added: “I know that whoever my successor will be, will be committed to the levelling-up agenda, committed to driving forward all of the investments that we’re making to give hope and opportunity to talent up and down the country.

“I think that this is the most amazing country in Europe, not the world. It has all the potential it needs to be the most prosperous economy in Europe.

“If the UK was firing on all cylinders, so if every part of the UK was as evenly productive in the way that other countries in Europe and other countries around the world are, we would be the biggest economy in Europe – we’d be the richest country. “That is achievable because there is genius everywhere. There’s no doubt about it.”

He cautioned against going “back to the old way of thinking” that the UK has got to be pulled along, exclusively by London and the Southeast.

Boris Johnson promised energy reforms in his final days of government that will make bills cheaper for British families.

The Prime Minister said a mix of small nuclear reactors and larger stations are needed to secure supplies.

“So, no wonder the French have less of a problem with energy price inflation when they have huge quantities of juice coming from nuclear.

“It’s not just the big ones, we need to be putting the small modular reactors in as well. We need to play lots of different strokes at the same time.

“The UK has pioneering technology, and it’s absurd. We are the only country in the world that’s very capable of doing small modular reactor stuff because of what Rolls Royce has been – so let’s get on and do it.”

As many as 130 licences could be issued under the plans to extract gas and oil.

”Making our streets safer has always been central”

The Prime Minister said almost 14,000 officers have already been recruited. It follows a record £15.8billion investment in forces up and down the country.

Speaking ahead of joining new police officers working on the frontline, Mr Johnson said:“Making our streets safer has always been central to my mission to level up this country, because everyone should have the security, confidence and opportunity that comes from having a safe street and a safe home, wherever they live.

“We are cracking down on vile gangs and putting dangerous offenders behind bars for longer – and at the heart of these efforts are the 20,000 new officers who will be out on the streets providing the firepower for years to come in the fight against crime.”

Mr Johnson was also due to speak to officers from one of the 20 new Violence Reduction Units set up by the government.

His visit comes as new Home Office figures show a 90 per cent satisfaction rate among new recruits brought in under the government’s recruitment drive, with almost 80 per cent reporting that the job met or exceeded their expectations. Located in the areas hardest hit by violent crime, Violence Reduction Units target the underlying causes of violence to help prevent children and young people from being exploited by criminal gangs.

The £170 million programme has already prevented more than 49,000 violent offences in their first two years and supported more than 260,000 vulnerable young people in their second year alone.

Since 2019 the police have removed over 72,000 knives and dangerous weapons through stop and search, surrender programmes and other targeted police actions.

The government has also significantly stepped up action against county lines gangs and launched a first-of-its-kind Drug Strategy to deliver a whole system approach to tackling supply and demand.

Since November 2019, more than 2,400 drug dealing lines have been shut down, 8,000 arrests made, and supported over 9,500 individuals at risk of exploitation.

The government’s Police, Crime, Sentencing and Courts Act, which passed into law last year, equips the police with the powers and tools they need to crack down on crime, including through lifting restrictions on stop and search and introducing new court orders to help target known knife carriers.

The Act has also brought in tougher sentences to keep serious sexual and violent offenders behind bars for longer so that they pay the full price of their crimes.