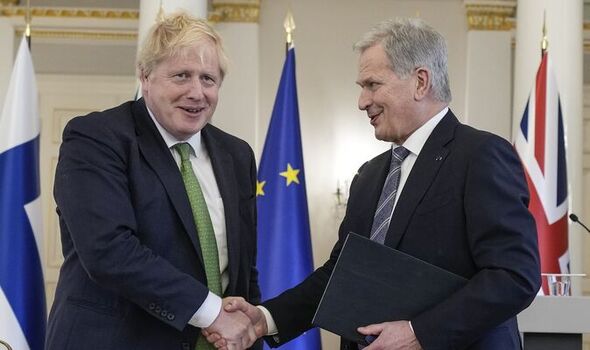 The Prime Minister agreed military cooperation and mutual defence support on a whistlestop tour of both countries. And in a message to the Kremlin, he insisted the two nations must be free to join Nato “without fear of retaliation”.

He confirmed he could send troops to help in the event of a Russian invasion at a news conference last night, alongside Finnish President Sauli Niinisto.

Asked if he would put “British boots on the ground”, Mr Johnson said: “I think the solemn declaration is itself clear…that in the event of a disaster, or in the event of an attack on either of us, then yes, we will come to each other’s assistance, including with military assistance.”

He added: “The nature of that assistance will of course depend upon the request of the other party. But it’s also intended to be the foundation of an intensification of our security and our defence relationship in other ways as well.”

His day began in Sweden, where PM Magdalena Andersson welcomed him to her country retreat, Harpsund, with a rowing boat trip.

Mr Johnson remarked that the Brits and Swedes had already worked well together.

He said: “The many carcasses of Russian tanks that now litter the fields and streets of Ukraine, thanks to Swedish-developed and British-built NLaws (anti-tank weapons), certainly speak to how effective that co-operation can be.”

He added that the historic security assurance declaration with Sweden would allow the countries to “share more intelligence, both to our military exercises and further our joint development of technology”.

Speaking alongside Ms Andersson, Mr Johnson said: “This week, many of us have been paying tribute to the brave men and women who secured victory and peace in Europe 77 years ago.

“So, it’s a sad irony that we’ve been forced to discuss how best to fortify our shared defences against the empty conceit of a 21st-century tyrant.”

He added: “Most importantly, this is an agreement that enshrines the values that both Sweden and the UK hold dear, and which we will not hesitate to defend.”

Ms Andersson said she was “very happy” to sign the bilateral political decla- ration of solidarity and said her country would be safer as a result.

Sweden and Finland, with small populations of 10.3 million and 5.5 million respectively, both have borders with Russia. To date they have not joined Nato to avoid antagonising the Kremlin.

But since the invasion of Ukraine, the two nations have signalled an interest in signing up to the military alliance.

Earlier yesterday, Mr Johnson said the UK Government would support Sweden joining Nato if it decides it wants to.

He told the BBC that Russia’s invasion of Ukraine had sparked a “general anxiety” around security “for many countries in Europe”. The PM added: “There is a separate conversation going on in Sweden about Nato membership. That may come to a head in the next few days and weeks.

“It is not for the UK to intervene in that debate. Suffice to say that we would strongly support Sweden’s accession if that was what the Swedes chose to do.

“We would certainly try to make things go as smoothly and easily as possible.”

In Finland – where he was welcomed by Mr Niinisto at the Presidential Palace in Helsinki – Mr Johnson said: “The Russian invasion of Ukraine has changed the equation of European security and…rewritten our reality and reshaped our future.”

He added: “That invasion has already failed for two reasons. Firstly because of the unbreakable spirit of the Ukrainian people. And secondly because that

Ukraine struggle for freedom…has brought the world together in condemnation of this assault on our values.

“It would be fair to say it has also brought Finland and the UK even closer together today.”

The PM told the President: “From the High North to the Baltics and beyond, our armed forces will train, operate and exercise together – marrying our defence and security capabilities and formalising a pledge that we will always come to one another’s aid.

Enduring “Because this is not a short-term stopgap as you consider Nato membership,.

“But an enduring assurance between our two nations – an assurance that brings us even closer together as we face the challenges of today, the threats of tomorrow, side-by-side.”