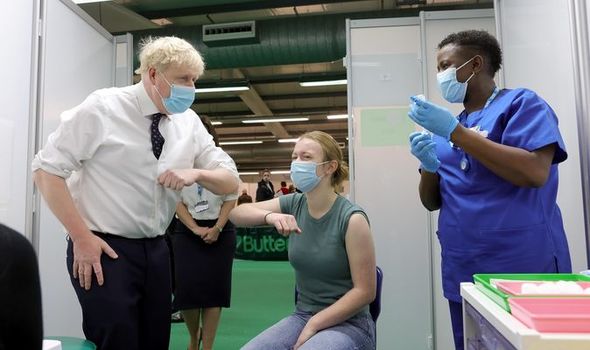 The Prime Minister said the highly contagious Omicron strain rampaging across Britain is “considerably milder” than previous variants with far fewer people getting seriously ill. Despite a huge increase in Covid infections, Mr Johnson declared the country was in a better position than most because of our “very, very high level of vaccination”. Ruling out further restrictions for now, he said: “I think the way forward for the country as a whole is to continue with the path that we’re on. We will keep everything under review.

“The mixture of things that we’re doing at the moment is, I think, the right one.” Mr Johnson spoke yesterday, in his first public comments of 2022, as Government figures showed virus cases had jumped to 157,758 and 42 new Covid-related deaths were recorded in the latest 24-hour period.

Nearly 35 million booster vaccinations have now been given in the fight against Omicron. During a visit to a Covid vaccination centre in Aylesbury, Bucks, the Prime Minister said it would be “folly” to say the pandemic was over – but the Plan B measures currently in place were the right ones.

It will mean continuing with the safeguards already introduced, which includes mask wearing in certain indoor settings and guidance for people to work from home where possible.

Mr Johnson said: “There’s no question Omicron continues to surge through the country. “I think we’ve got to recognise that the pressure on our NHS, on our hospitals, is going to be considerable in the course of the next couple of weeks, and maybe more.”

“So, number one, continue with Plan B, make sure that people take it seriously, do what we can to stop the spread. Use the Plan B measures, work from home if you can, wear a mask on public transport, take a test before going out to meet people you don’t normally meet, think about the requirements under Plan B, but also get the boost.”

Mr Johnson also urged people to come forward for booster vaccinations – and also suggested NHS staff could be moved to plug shortages over fears the Omicron wave could trigger a lockdown by default.

He said: “I would say to everybody, looking at the pressures on the NHS in the next couple of weeks, and maybe longer, looking at the numbers of people who are going to be going into hospital, it will be absolute folly to say that this thing is all over now bar the shouting. We’ve got to remain cautious. We got to stick with Plan B. We’ve got to get boosted.”

The measures are due to expire on January 26, although they are expected to be reviewed tomorrow when Parliament returns from recess. Mr Johnson has been buoyed by a string of hugely positive studies showing Omicron is milder than other strains.

The first official UK report has revealed that the risk of being admitted to hospital is 50 to 70 percent lower than with the Delta variant. Health chiefs have stressed repeatedly that the Covid booster jabs protect against Omicron and offer the best chance to get through the pandemic.

The latest figures from London, which is facing an Omicron outbreak, have also suggested that hospital admissions have reached their peak and are starting to plateau. Even though daily cases and hospitalisations have grown rapidly in the last fortnight, the number of people on ventilators has barely increased.

The latest figures from NHS England have suggested that hospital admissions in London have begun to slow. Last week hospitalisations spiked by as much as 15 percent a day, but over the last two days that rate has dropped to one and two percent.

However, scientists believe the full effects of the Christmas period may not show up in the data until the end of this week. Chris Hopson, chief executive of NHS Providers, which represents hospital trusts, said because London was the UK “centre of Omicron”, the figures coming out of the capital gave a good marker for how Omicron was affecting the NHS.

However, he warned it would take several more days to know how new year celebrations and the return of schools would affect hospital admissions. Mr Hopson told Sky News: “We’re not seeing very large numbers of seriously ill older people, which we were really, really concerned about two or three weeks ago. It still may come but at the moment it’s still not coming, which is really helpful.”

Earlier yesterday, Education Secretary Nadhim Zahawi said ministers were “concerned” the number of people over 50 being admitted to hospital with Covid was rising. He added: “If we see more leakage of infection in the over-50s – because most of the surge in infections from the Omicron variant has been in the under-50s – then that is more likely that those people end up with severe infection and hospitalisation. But the good news is obviously that 90 percent of those people over 50 have had the booster jab. That is the real protection against severe infection and hospitalisation.”

The Prime Minister revealed yesterday the Government is looking at redeploying staff. It came after the public sector was warned to brace for a worst-case scenario of a quarter – around 1.4 million people – being off work. One in 10 NHS employees were not in on New Year’s Eve, according to official figures. Just 50,000 of the 110,000 total was related to Covid.

Meanwhile, United Lincolnshire Hospitals NHS Trust declared a “critical incident” linked to “extreme and unprecedented” staff shortages. In addition, nearly a third of rail services have been axed at some stations in recent days. The move came after as many as one in 10 staff called in sick with illnesses including Covid.

Meanwhile, major engineering works on key commuter routes are scheduled to continue until midway through next week. Town halls across the UK are also having to redistribute staff between essential services to keep everything running. And schools are being urged to make contingency plans to deal with staff absences when they return from the Christmas holidays this week.