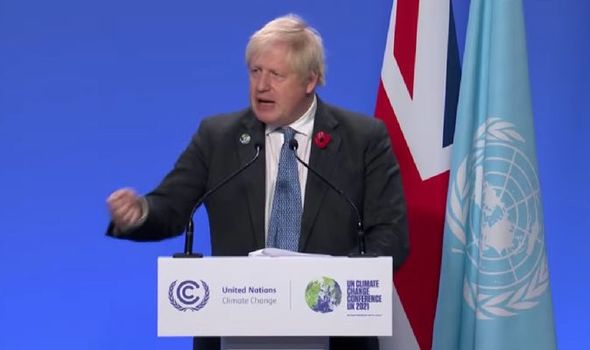 The Prime Minister will address the nation at 4.30pm after returning to Scotland for the final days of the COP26 climate summit held in Glasgow. He is expected to deliver a rallying cry for world leaders to step up their environmental pledges as the pivotal summit draws to a close. However, the announcement comes as Mr Johnson is embroiled in controversy around Tory sleaze, MPs second jobs and the resignation of the party vice-chairman, Andrew Bowie.

Why the Owen Paterson scandal has raised questions about Tory sleaze

Conservative MP Owen Paterson’s suspension had been recommended by the independent parliamentary commissioner for standards after he was found to have broken lobbying rules.

Mr Paterson lobbied on behalf of two private companies which paid him £110,000-a-year for his services.

The whip was used to block Mr Paterson’s suspension in Parliament and the Conservative party attempted to scrap the standards committee.

After significant public backlash, Number 10 oversaw a U-turn and Mr Paterson quit as an MP.

This sparked widespread discussion of Tory sleaze and the debate about whether MPs should be allowed second jobs.

‘You are not immune!’ Greenpeace boss takes aim at Saudia Arabia

Saudi Arabia’s reluctance to commit to reducing fossil fuels does not make it immune to the effects of climate change, a Greenpeace boss has warned.

Saudi Arabia, China and India were accused of “naked and cynical attempts” to water down messages about humanity’s impact on the planet, fossil fuels, and greenhouse gases driving global warming.