The Prime Minister said “extra cash” would be unveiled in September by Rishi Sunak or Liz Truss following the end of the Tory leadership race. He said measures already announced by ministers earlier this year would be “increased by extra cash that the Government is plainly going to be announcing in September”.

His intervention came just hours after energy regulator Ofgem announced the price cap for average annual energy bills would rise to £6,608 from October.

It added that prices could get “significantly worse” next year.

For weeks Mr Johnson has refused to comment on what action might be taken by his successor saying it would be wrong for him to tie their hands.

However, he appeared to lay down the gauntlet today as he told Britons more cash handouts would be delivered. 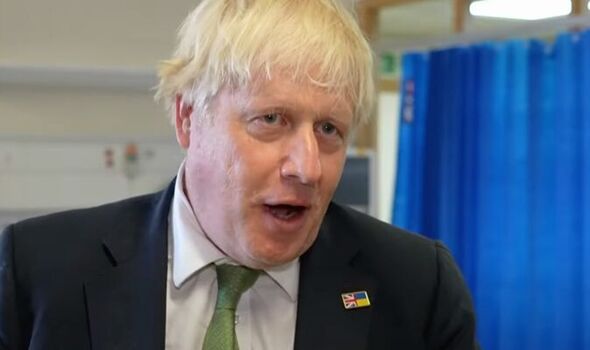 He said: “We want to target the households so most of the money will go to the eight million most-vulnerable households, that’s the right thing to do.

“A lot of money will be going to absolutely everybody.”

The outgoing Prime Minister also warned the two Tory candidates jostling it out to replace him against offering blanket support for all households.

Mr Johnson added: “What don’t think we should be doing is trying to cap the whole thing for absolutely everybody, the richest households in the country.

“And it will be tough – and I’d be very clear about that – but in the end, we are also putting in the measures we need to ensure that we have the energy independence to get through this.

“We have already seen a 26 percent increase in British gas now from the North Sea.”

Both Ms Truss and Mr Sunak have vowed to help Britons struggling with the cost of living if appointed as Prime Minister.

The Foreign Secretary has said she favours tax cuts to help ease the burden of energy price rises.

“Today’s announcement will cause grave concern to many people across the UK who will be worried about paying their bills.

“As Prime Minister, Liz would ensure people get the support needed to get through these tough times,” a spokesperson for her campaign said today.

Ms Truss has previously said she does not believe handouts are the best way to help households through the cost-of-living squeeze.

Meanwhile, Mr Sunak has said protecting people from rising energy bills would be his “immediate priority” as Prime Minister.

He said that people can judge him on his “track record” as chancellor, pointing to the package of support he announced for people to tackle the cost-of-living crisis.

“It was acknowledged as being commensurate with the scale of the challenge, targeted at the people most in need,” Mr Sunak told broadcasters this morning.

“That is my track record in grappling with this issue.

“I moved quickly as chancellor and this will be my immediate priority as prime minister and I’d like to try and do the same thing and make sure that we protect the most vulnerable as much as we can from this significant increase in bills.”