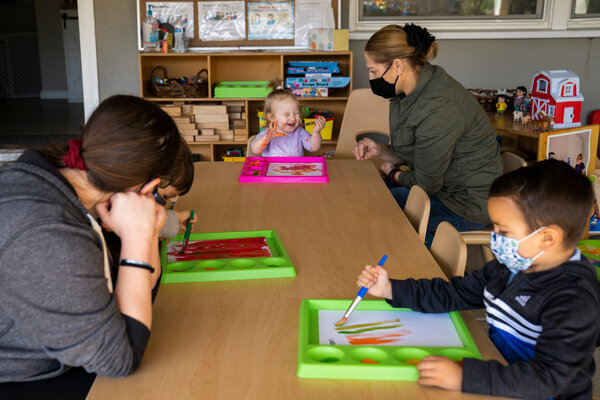 President Biden will announce on Wednesday that four of the nation’s largest child care providers have agreed to offer free child care to parents and caregivers while they get vaccinated against the coronavirus during the next month, part of an aggressive push to reach Mr. Biden’s goal of getting 70 percent of American adults at least one shot by July 4.

Currently, 62.8 percent of American adults have received at least one shot, according to the Centers for Disease Control and Prevention, and 12 states have passed the 70 percent mark, according to the White House.

The president is trying to speed things along. The child care announcement is part of what the White House is calling a “National Month of Action” — with participation by celebrities, athletes, social media influencers, and national and community organizations — akin to a get-out-the-vote effort to meet Mr. Biden’s goal.

Wednesday’s announcement comes on the heels of other White House efforts intended to encourage vaccination, including last month’s pledge by Lyft and Uber to offer free rides. An Uber spokesman said Wednesday that 60,000 people have taken advantage of the offer since it began providing the service last Monday.

White House officials, previewing the president’s remarks on condition of anonymity, said in an interview that they were aware that the deeper they got into the vaccination campaign, the harder it would be to get people vaccinated. The president’s goal, they said, is to make vaccination easy, free and convenient — and even a little bit fun. (That may be where the celebrities come in, but the officials would not offer details.)