ALLIANCE, Ohio — A day after a staggeringly contentious presidential debate, Joseph R. Biden Jr. sought again to put President Trump on the defensive on Wednesday by casting his opponent as a callous plutocrat who abandoned the working Americans who elected him.

In his most vigorous day of campaigning in months, Mr. Biden embarked on an old-fashioned train tour to directly appeal to the blue-collar white Americans who powered Mr. Trump’s victories in the Midwest in 2016. The trip brought him to a host of cities in eastern Ohio and western Pennsylvania, a region where Mr. Trump had previously won over working-class white voters who traditionally voted for Democrats, setting off a realignment of the political parties.

“What I saw last night was all about him,” Mr. Biden said of the debate in Cleveland, during which Mr. Trump constantly interrupted and taunted him, and the Democratic nominee issued his own series of sharply personal criticisms. “He didn’t speak to you or your concerns or the American people even once.”

Mr. Biden, the former vice president, faces a steep challenge in seeking to win back many of the white longtime Democratic voters who supported Mr. Trump in 2016 and have only grown more intense in their commitment to him. In Alliance, Ohio, a sizable and organized pro-Trump contingent showed up on Wednesday morning to loudly protest Mr. Biden’s appearance.

But in this city, and elsewhere in Ohio, there were also signs of the radically different environment Mr. Trump faces now — amid a pandemic, an economic collapse and four years of a controversial record — compared with 2016, when many voters disliked both major-party candidates and some were inclined to give Mr. Trump a chance.

“He’s divided this country so bad,” said Steve Campbell, 67, who is retired from a tool and die company and lives in Alliance. He did not vote in the 2016 presidential election, he said, displeased by the choice between Mr. Trump and Hillary Clinton. 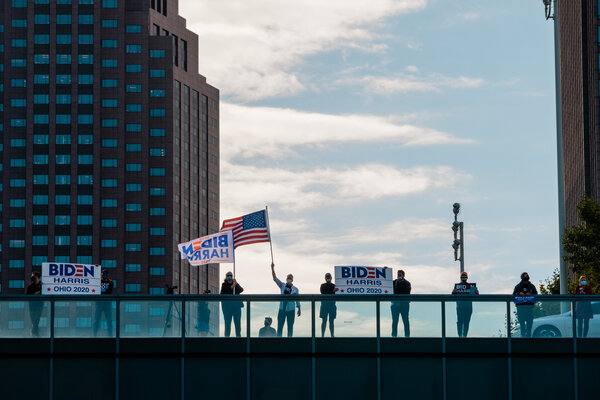 But on Wednesday morning, Mr. Campbell stood outside the Alliance train station holding a sign promoting the Democratic ticket and lamenting the “ridiculous” debate. He denounced Mr. Trump’s attacks on Hunter Biden, the former vice president’s son, as a “low point” and “just wrong,” and expressed horror at the president’s refusal to categorically condemn white supremacists.

“I’m not a Democrat or Republican,” Mr. Campbell said. But this year, he will be affirmatively voting for Mr. Biden, he said, adding, “This country’s in such disarray.”

Mr. Biden is polling neck-and-neck with the president in Ohio, but many Democrats continue to view a victory there as a stretch. Mr. Trump carried the state by eight percentage points in 2016, and it is not among the battlegrounds that Mr. Biden’s campaign has been most focused on.

In Pennsylvania, Mrs. Clinton’s surprise defeat four years ago is a source of nightmares for many Democrats who are still wary of believing polls showing Mr. Biden with a stable lead there.

According to a recent New York Times/Siena College poll of Pennsylvania that showed Mr. Biden with a nine-point edge, Mr. Trump has double-digit leads over Mr. Biden among white voters without four-year college degrees and among rural voters.

But the same poll showed an opportunity for the Biden team: Mr. Trump, who won Pennsylvania by less than a percentage point in 2016, is underperforming with those voters compared with how he fared four years ago, and Mr. Biden has a chance to cut further into his margins.

That was what Mr. Biden seemed intent on doing on Wednesday in Ohio and Pennsylvania — though at a significant distance from many voters in Alliance. He met with a few Ohio voters aboard his chartered Amtrak train, but he did not engage the crowd that had gathered across the street from the train station — one that included pro-Biden and pro-Trump groups of people, many without masks. One woman in her 80s grilled members of law enforcement about why she could not see Mr. Biden, whom she supports.

“The Republicans here appear, here in our area, to be very firmly behind the president,” said Alan Andreani, the Republican mayor of Alliance, describing intense activity on both sides of the aisle in this city, more so than in 2016.

Mr. Biden has for months maintained a limited travel schedule amid the pandemic, and outdoors on Wednesday, he was careful to stay at a distance from others as he gave a speech in Alliance and took questions from reporters.

Mr. Biden said Mr. Trump “did what I expected him to do last night,” and he called the debate “a wake-up call for all Americans.” The way Mr. Trump conducted himself, Mr. Biden said, was “a national embarrassment.”

“For 90 minutes, he tried everything to distract — everything possible,” he said. “It just didn’t work.”

Mr. Biden began the train tour with a speech at Cleveland’s Amtrak station, where he was introduced by a teacher whose husband worked at the General Motors plant in Lordstown, Ohio, that closed last year.

The former vice president said the debate on Tuesday was supposed to be “about you and all the people I grew up with in Scranton,” his Pennsylvania hometown. Mr. Biden has been open in his ambition to win over voters who supported President Barack Obama and himself before flipping to Mr. Trump, honing a populist economic message that casts the contest as a choice between Scranton and Park Avenue.

“Does your president understand at all what you’re going through, what so many other people are going through?” Mr. Biden asked. “The question is: Does he see you where you are and where you want to be? Does he care? Has he tried to walk in your shoes, to understand what’s going on in your life?”

Polls show that few undecided voters remain. In the hours before the debate, voters milling in and out of a grocery store in Parma, Ohio — a city outside Cleveland that flipped from backing Mr. Obama to supporting Mr. Trump — often said in interviews that their minds were already made up, regardless of the debate outcome.

One exception was Patricia Kiser, 78, who said she had changed her mind about the president. She voted for him in 2016 but will not do so this year, she said.

Katie Glueck reported from Alliance, and Thomas Kaplan from Washington.