As a senator, he backed legislation that led to mass incarceration and long drug sentences. Now his administration is signaling that he could use clemency to address inequities. 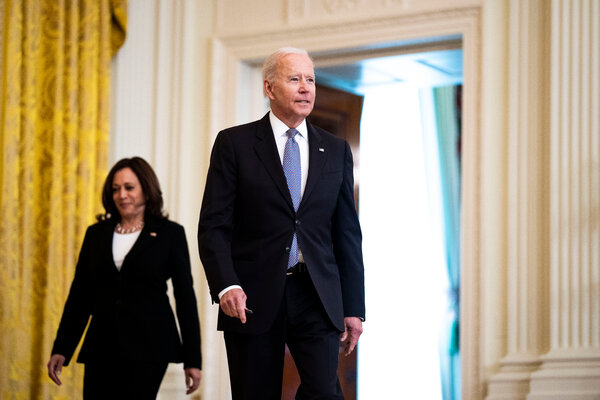 WASHINGTON — Administration officials have quietly begun evaluating clemency requests and have signaled to activists that President Biden could begin issuing pardons or commutations by the midpoint of his term.

The effort, which is being overseen by the White House Counsel’s Office and the Justice Department, is an implicit rebuke of President Donald J. Trump’s approach to clemency, which mostly bypassed the Justice Department and relied on an ad hoc network of friends and allies, resulting in a wave of late pardons and commutations to people with wealth or connections.

Mr. Biden’s team, by contrast, has signaled in discussions with outside groups that it is establishing a more deliberate, systemic process geared toward identifying entire classes of people who deserve mercy. The approach could allow the president to make good on his campaign promise to weave issues of racial equity and justice throughout his government.

Mr. Biden’s approach to his pardon powers is part of a broader long-term shift in his criminal justice policies. During his 35 years in the Senate, he helped fashion a string of bills that enacted harsh sentences for drug crimes and laid the groundwork for the mass incarceration that disproportionately affected Black communities.

On the campaign trail, Mr. Biden apologized for portions of one of the more aggressive tough-on-crime measures he championed, the 1994 crime bill. And as president, he has surrounded himself with supporters of overhauling the system.

The White House has publicly offered few details about his plans for issuing pardons, which wipe out convictions, and commutations, which reduce prison sentences. But White House officials have indicated in private conversations with criminal justice activists, clemency seekers and their allies that Mr. Biden’s team is working with the Justice Department’s Office of the Pardon Attorney to process clemency requests with an eye toward having the president sign some before the 2022 midterm elections.

“We asked them not to wait to the end of a term to execute pardon and commutation power for photo ops, and they definitely assured us that is not this administration’s plan,” said DeAnna Hoskins, the president of the criminal justice group JustLeadershipUSA, who participated in a Zoom session for former prisoners with White House officials last month.

“This administration is looking at early on,” said Ms. Hoskins, who worked on prisoner re-entry issues for county, state and federal government agencies after serving a 45-day sentence for theft in 1999.

Participants in the Zoom session and other meetings with the White House have come away with the impression that Mr. Biden intends to use clemency grants — which are among the most unchecked and profound powers at a president’s disposal — to address systemic issues in the criminal justice system.

The Biden campaign hinted at such an approach in its criminal justice platform, which indicated that he intended to use clemency “broadly” to “secure the release of individuals facing unduly long sentences for certain nonviolent and drug crimes.”