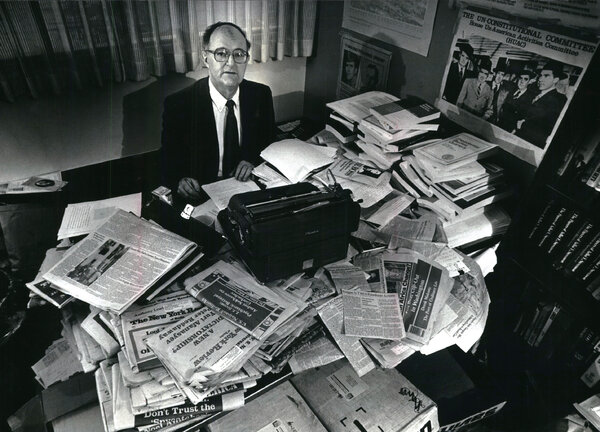 Athan Theoharis, a pre-eminent historian of the F.B.I. whose indefatigable research into the agency’s formerly unobtainable files produced revelations about decades of civil liberties abuses under the leadership of J. Edgar Hoover, died on July 3 at his home in Syracuse, N.Y. He was 84.

The cause was pneumonia, his daughter Jeanne Theoharis said.

Beginning in the mid-1970s, Professor Theoharis, who taught history at Marquette University in Milwaukee, deftly used Freedom of Information Act requests to pry open the F.B.I.’s deep well of secrets, including the extent to which Hoover compiled damning information on public officials and his cooperation with Senator Joseph McCarthy’s campaign against people he accused of being Communists.

The documents showed the extent of the agency’s break-ins and its illegal surveillance of left-wing organizations; its pursuit of allegations that President Dwight D. Eisenhower had extramarital affairs; and the use of the F.B.I. by presidents of both parties for political purposes.

One of Professor Theoharis’s most alarming finds was a surveillance program forged by the F.B.I. and the American Legion in 1940 that lasted until 1966. The F.B.I. used tens of thousands of the organization’s volunteers to report information about other citizens.

The goal of the program was to use Legionnaires, “who were highly motivated and who held pretty conservative views, who were going to act as the eyes and ears and expand the resources of the bureau beyond the agents,” Professor Theoharis said in a joint interview in 2013 for the book “The Burglary: The Discovery of J. Edgar Hoover’s Secret F.B.I.,” by Betty Medsger, and “1971” a documentary directed by Johanna Hamilton.

Both the book, published in 2014, and the film, released the same year, dealt with the burglars who stole critical documents from an F.B.I. office in Media, Pa., which showed, among other things, active unlawful surveillance of Black, student and peace groups, and led to the revelation of Hoover’s secret Cointelpro program, begun in 1956, which spied on civil rights leaders, political organizers and suspected Communists.

Professor Theoharis’s strategic use of the Freedom of Information Act, of FOIA, enabled him to find pathways to documents through a purposely evasive filing system that Hoover had hoped no one would ever divine.

“Hoover was an insubordinate bureaucrat in charge of a lawless organization,” Mr. Theoharis told The Milwaukee Journal Sentinel in 1993. “He was also a genius who could set up a system of illegal activities and a way to keep all documentation secret for many years.”

Beverly Gage, a history professor at Yale University who is completing a biography of Hoover, said in a phone interview that one of Professor Theoharis’s tactics had been to request “special agent in charge” orders that showed which policies Hoover had wanted the F.B.I.’s field offices to follow.

“For me, these records gave me an institutional sense of the inner workings of the F.B.I.,” Professor Gage said. “He figured out the key words to file the right FOIA requests.”

Professor Theoharis was an eager mentor to his graduate students and to historians on both the left and the right, helping them to navigate the F.B.I.’s filing system. Kenneth O’Reilly, a professor emeritus of history at the University of Alaska, Anchorage, was a graduate student of his in the mid-1970s whose dissertation was on the relationship between the F.B.I. and the House Un-American Activities Committee.

But after filing a FOIA request, he was told he would have to pay copying costs of several thousand dollars, and he almost dropped the subject.

“He got me and a lot of other graduate students going,” Professor O’Reilly said by phone.

“McCarthy’s files are there — my father took joy in that,” said Jeanne Theoharis, a professor of political science at Brooklyn College.

He taught history at what is now Texas A&M University, Wayne State University in Detroit and Staten Island Community College (now part of the College of Staten Island) before joining the Marquette faculty in 1969. He taught 20th-century American history there until his retirement in 2006.

Professor Theoharis was originally a Cold War scholar; his early books included “The Yalta Myths: An Issue in U.S. Politics, 1945-55” (1970) and “Seeds of Repression: Harry S. Truman and the Origins of McCarthyism” (1971).

In his research, he found documents dealing with wiretapping policy and the federal employee loyalty security program during the Truman administration, including records in the Truman library about the expansion of the F.B.I.’s wiretapping authority.

His article “Thirty Years of Wire Tapping,” published in The Nation in 1971, brought him to the attention of the Senate Select Committee to Study Governmental Operations With Respect to Intelligence Activities, better known as the Church Committee for its chairman, the Idaho Democrat Frank Church.

Professor Theoharis became a consultant to the committee, which in 1975 and 1976 investigated the legality of the F.B.I., the C.I.A. and the National Security Agency’s intelligence operations. He did research in the archives of several presidential libraries, including those of Truman, Eisenhower and Lyndon B. Johnson, on the classified material the F.B.I. sent to presidents.

“They have access to F.B.I. records, unrestricted access,” he told Ms. Medsger and Ms. Hamilton, referring to the Church Committee and its counterpart in the House, led by Representative Otis Pike, a New York Democrat. “And it’s a different ballgame.”

And it was for Professor Theoharis as well. He deployed FOIA, which had been strengthened by Congress in 1974, to plumb Hoover and his top aides’ sensitive “Official and Confidential” files, along with those designated “Do Not File,” which were kept from the F.B.I.’s central records, presumably safe from being disclosed.

“That absurd “Do Not File’ file was one of the things that Athan drilled down on,” Professor Gage said, “and he got a lot of information that way.”

Reviewing “The Boss” in The New York Times, Herbert Mitgang wrote: “Unlike some other recent Hoover biographers, the authors do not make apologies for the excesses of ‘The Boss.’ They have the goods on him.”

Professor Theoharis thought that the portrait of Hoover as a homosexual cross-dresser that emerged in Anthony Summers’s 1993 book, “Official and Confidential: The Secret Life of J. Edgar Hoover,” was a distraction from the seriousness of Hoover’s unchecked authority.

He refuted Mr. Summers in 1995 with “J. Edgar Hoover, Sex and Crime: An Historical Antidote,” in which he wrote that Hoover’s leadership of the F.B.I. was “a story of a resourceful bureaucrat who successfully circumvented the limitations of the American constitutional system of checks and balances” — and not, as Mr. Summers had it, a “morality play” about a closeted gay man whose secret was used by organized crime bosses to leave them alone.

In addition to his daughter Jeanne, Professor Theoharis is survived by another daughter, the Rev. Dr. Liz Theoharis, co-chairwoman of the Poor People’s Campaign; a son, George, a professor of educational leadership at Syracuse University; his sisters, Arhontisa and Zoe Theoharis; his brother, Theoharis Theoharis; and five grandchildren. His wife, Nancy (Artinian) Theoharis, a human-rights activist, died last year.

Ms. Medsger — who broke the story of the F.B.I. burglary for The Washington Post in 1971 and enlarged on her reporting in her book, which revealed who the burglars were and assessed the impact of their act — recalled approaching Professor Theoharis with trepidation during her research.

“I didn’t want to get in touch with him until I’d read all his books on the F.B.I.,” she said by phone. “I wanted to confirm things with him, knowing he was the person who knew the most about the F.B.I. But I remember feeling comfortable with him. He wasn’t intimidating.”