An Ohio Republican who is retiring after decades in Washington has teamed with an Arizona Democrat in her first term to try to secure an agreement on one of President Biden’s top priorities. 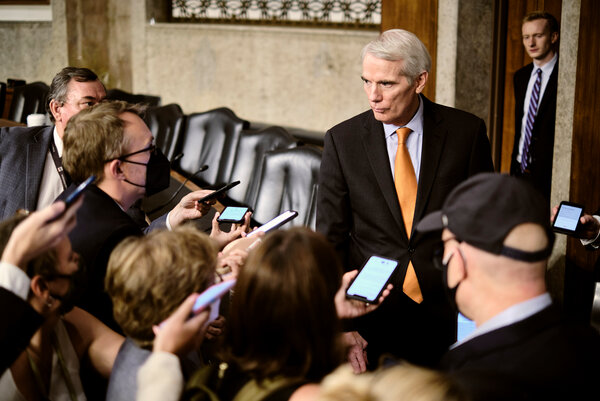 WASHINGTON — It had scarcely been 24 hours since a breakthrough vote in the Senate to move forward with a $1 trillion infrastructure bill when the two lead negotiators on the deal, Senators Rob Portman, Republican of Ohio, and Kyrsten Sinema, Democrat of Arizona, knew they had a problem.

Republicans had seen a draft of the bill that was circulating on Capitol Hill, and believed that the Senate’s top Democrat, Senator Chuck Schumer of New York, was trying to force them into swallowing changes their side had never agreed to accept. They were threatening to pull their support.

The pair swung into action, issuing an unusual public statement with a clear message: That is not our bill, and we are not done working. Not long after, the measure appeared back on track, surviving its second test vote in a week.

And Mr. Portman and Ms. Sinema, unlikely allies who are leading a fragile coalition of Republicans and Democrats, had pulled off the latest in a series of collaborations that have so far kept alive the sprawling infrastructure package — a crucial piece of President Biden’s agenda — despite myriad obstacles.

The two could not be more different, but each has powerful incentives to pursue an elusive deal. The strait-laced Mr. Portman, a creature of Washington who has served in the House, the White House and the Senate, is retiring and looking to cement his legacy as a pragmatic Republican who rejects the intense partisanship that has gripped Congress in recent years.

Ms. Sinema, an enigmatic first-term senator who relishes breaking with convention, is determined to prove her own deal-making prowess, and willing to counter progressive Democrats eager to push Republicans aside after years of seeing their priorities blocked.

Both are centrists who have been empowered by Mr. Biden’s desire for a bipartisan infrastructure deal, which he considers a political and policy imperative. And both have had to contend with hostility from within their own parties to that deal.

Mr. Portman called former President Donald J. Trump this month to ask him to embrace the emerging legislation, in a bid to blunt public criticism from Mr. Trump that he feared could cost Republican votes. But Mr. Trump did not back down, issuing several statements deriding “RINO” Republicans he said looked weak, foolish and dumb for negotiating with Democrats and risked primary challenges for doing so.

Ms. Sinema was receiving similar fire from liberal Democrats who were seething over her refusal to support eliminating the 60-vote legislative filibuster to achieve their policy goals.

Steering their bill through Congress remains a fraught endeavor. Senior lawmakers in both parties and both chambers have been rankled to see the band of 10 Republican and Democratic moderates writing such a complex piece of infrastructure legislation, despite some of them having little expertise on aspects of it. On Friday, a series of technical and policy issues delayed efforts to complete it.