The progressive Democrat’s proposals for taxing the rich will take center stage as talks on paying for an infrastructure bill ramp up. 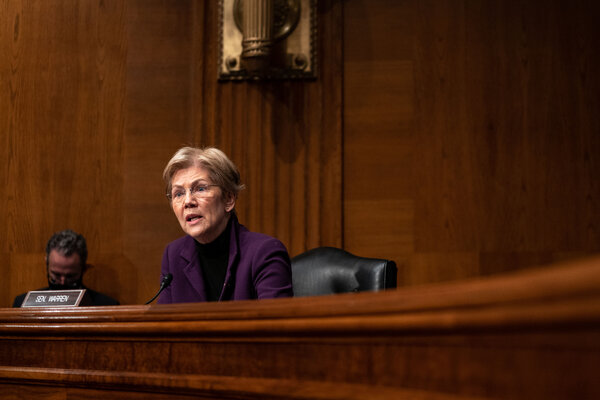 Ms. Warren, a progressive Democrat from Massachusetts, has been a mentor to Mr. Adeyemo, who served as her chief of staff when she was establishing the Consumer Financial Protection Bureau a decade ago. But when he gave a noncommittal answer, she did not let him off the hook.

“I don’t think you should waver about this,” Ms. Warren said emphatically. “Treasury should not be a bystander in this.”

The exchange underscored Ms. Warren’s role in the new Washington, where the Biden administration and congressional Democrats control the levers of power. A year after ending her own presidential bid, and with her aspirations of becoming Treasury secretary unfulfilled, Ms. Warren now wields influence in her own way. She has shepherded a pipeline of progressive former staff members into powerful jobs across the government, and she releases a steady stream of legislative proposals that have kept her progressive ideas at the forefront of the policy conversation.

Two months into the Biden presidency, it is not yet clear how much Ms. Warren’s sway will yield in terms of policy results. But many of her ideas for raising trillions of dollars of revenue by taxing the wealthy and big corporations will soon take center stage as the Biden administration and Congress consider ways to pay for the multitrillion-dollar infrastructure plan that they hope to pass this year.

Marcus Stanley, the policy director of Americans for Financial Reform, an advocacy group, said the upcoming infrastructure and jobs legislation would be a real test of Ms. Warren’s influence.

“We probably have a big bill coming up in the next couple of months, so when you talk about winning the policy fights, we’re going to see there,” Mr. Stanley said.