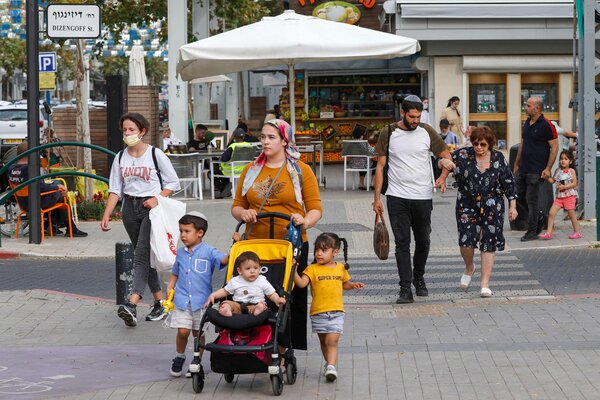 New data from Israel, which had the fastest Covid-19 vaccine rollout in the world, provides real-world evidence that widespread vaccination against the coronavirus can also protect people who are unvaccinated.

The Israeli study, which was published in the journal Nature Medicine on Thursday, took advantage of the fact that until recently Israel was only vaccinating people 16 or older. For every 20 percentage point increase in the share of 16- to 50-year-olds who were vaccinated in a community, the researchers found, the share of unvaccinated under 16s who tested positive for the virus fell by half.

“Vaccination provides benefits not only to the individual vaccinee but also to people around them,” said Roy Kishony, a biologist, physicist and data scientist who studies microbial evolution and disease at Technion-Israel Institute of Technology. Dr. Kishony led the research with Dr. Tal Patalon, who heads a major health organization, KSM, the Maccabi Research and Innovation Center. The first authors of the paper are Oren Milman and Idan Yelin, researchers in Dr. Kishony’s lab.

Israel began vaccinating adults in December of last year. Within nine weeks, it had vaccinated nearly half of its population.

The researchers examined the anonymized electronic health records of members of Maccabi Healthcare Services, an Israeli H.M.O. They analyzed vaccination records and virus test results between December 6, 2020, and March 9, 2021. The records came from 177 different geographic areas, which had varying rates of vaccination and vaccine uptake.

For each community, they calculated the share of adults, between the ages of 16 and 50, who were vaccinated at various time points. They also calculated the fraction of P.C.R. tests of children under 16 that came back positive.

They found a clear correlation: As more and more adults in a community got vaccinated, the share of children testing positive for the virus subsequently fell.

“The results are consistent with vaccinees not only not getting sick themselves, but also not transmitting the virus to others,” Dr. Kishony said. “Such effects can be amplified over multiple cycles of infections.”

In another recent paper, which has not yet been published in a scientific journal, researchers in Finland reported that after health care workers got vaccinated, unvaccinated members of their households were also less likely to contract the virus.