Male scientists have long waxed poetic on the contents of their testes. “Sperm is a drop of brain,” wrote the ancient Greek writer Diogenes Laërtius. Leonardo da Vinci drew the penis with a sperm duct that connected directly to the spinal cord. The 17th-century microscopist Antonie van Leeuwenhoek claimed that each sperm cell contained within it a folded-up human being waiting patiently to unfurl.

For nearly as long, scientists have fretted about sperm’s seemingly inevitable decline. Most recently, a series of alarming headlines — as well as a new book by an epidemiologist at Mount Sinai Medical Center in New York — warned that falling sperm counts might threaten the future of the human race. “It’s a global existential crisis,” said Shanna H. Swan, author of the book “Count Down.”

Most of these headlines can be traced to an influential 2017 meta-analysis by Dr. Swan and others, which found that sperm counts in Europe, North America, Australia and New Zealand had plummeted by nearly 60 percent since 1973. The authors screened 7,500 sperm-count studies from around the world, weeded out most of them and ultimately analyzed 185 studies on 43,000 men worldwide.

They called the decline a “canary in the coal mine” for waning male reproductive health worldwide. Today, the authors would revise that statement. “There is clear and present alarm now,” said Dr. Hagai Levine, an epidemiologist at Hebrew University-Hadassah School of Public Health and a co-author on the 2017 review, in an email. “The canary is in trouble now.” Dr. Swan, in the same email, agreed.

Now a group of interdisciplinary researchers from Harvard and the Massachusetts Institute of Technology contend that fears of an impending Spermageddon have been vastly overstated. In a study published in May in the journal Human Fertility, they re-evaluated the 2017 review and found that it relied on flawed assumptions and failed to consider alternate explanations for the apparent decline of sperm.

In an interview, Sarah Richardson, a Harvard scholar on gender and science and the senior author on the new study, called the conclusion of the 2017 review “an astonishing and terrifying claim that, were it to be true, would justify the apocalyptic tenor of some of the writing.” Fortunately, she and her co-authors argue, there is little evidence that this is the case.

The 2017 authors were “methodologically rigorous” when it came to screening sperm-count studies for quality and consistency, Dr. Richardson and her colleagues write. However, even the data that passed muster was geographically sparse and uneven and often lacked basic criteria like the age of the men. Moreover, its authors took for granted that a single metric — sperm count — was an accurate predictor of male fertility and overall health.

The connection sounds logical: Without sperm, there can be no conception. That’s why sperm count is one of the first metrics that fertility specialists measure to try to determine the cause of infertility in a couple. But beyond that truism, the science of sperm count is surprisingly slippery.

For starters, no one knows what an “optimal” sperm count is. The World Health Organization sets a range of “normal” sperm count as from 15 to 250 million sperm per milliliter. (Men produce about 2 to 5 milliliters per ejaculation.) But it isn’t clear that more is better. Above a certain threshold — 40 million per milliliter, according to the W.H.O. — a higher sperm count does not mean a man is more fertile. 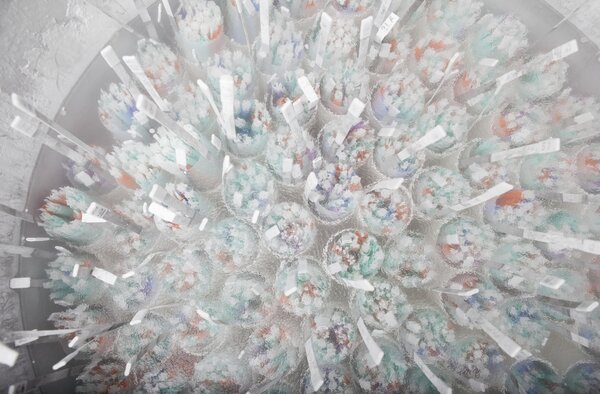 Germaine M. Buck Louis, a reproductive epidemiologist at George Mason University who studies environmental influences on human fertility, agreed that sperm count is a poor indicator of fertility. “We don’t see it predicting much of anything, especially in the context of a partner with a healthy female pelvis,” said Dr. Buck Louis, who was not involved in the sperm-count studies.

The authors of the 2017 study inferred that lower sperm counts equated to lower fertility — even though the sperm-count declines they documented all took place within the “normal” range, Dr. Richardson noted. “It’s similar to the whole conversation around testosterone — more is better, and more is manlier,” she said. “That’s really a point we make, that there is no known normal or baseline for average population sperm counts.”

Sperm count has other limitations as a metric. It takes around two months for stem cells in the testes to develop into new sperm, meaning that any single count is merely a snapshot of an evolving landscape.

“Something that’s going on in a man’s body one month may be totally different from what’s happening the next month, and the effects on sperm count might be changing also,” said Meredith Reiches, an author on the 2021 paper and a biological anthropologist at the University of Massachusetts, Boston

It also overlooks a vital piece of the infertility puzzle: women. Focusing only on the male metric leaves out key interactions between sperm, the female reproductive tract and the egg. “It’s very important, actually, to look at the couple,” said Dr. Bradley D. Anawalt, a reproductive endocrinologist at the University of Washington School of Medicine.

In her book, Dr. Swan suggests that sperm counts have plummeted largely due to the rise of endocrine disruptors, a class of hormone-mimicking chemicals found in everything from shampoo to TV-dinner packaging. (She also cites lifestyle factors like obesity, alcohol, and smoking.) Dr. Swan has shown in previous studies that exposure to these chemicals in utero can alter male and female sexual development.

Dr. Richardson and her co-authors suggested an alternative explanation: Perhaps sperm levels naturally rise and fall over time and within populations. The question has not been explored by reproductive researchers and cannot be answered easily, as global sperm counts before 1970 are largely unknown.

There are other possible explanations, as well. Sperm-counting is a tricky business and notoriously prone to human error, Dr. Pacey said. (“I say it from the point of view of someone who spent 30 years counting sperm and knows how difficult it is,” he added.) In a 2013 review article, he noted that as methodologies for counting had improved and been standardized since the 1980s, sperm counts had appeared to fall. In other words, it may simply be that earlier scientists were overcounting sperm.

Dr. Swan and Dr. Levine agreed that exploring these alternative hypotheses was important, so that threats to reproductive health could be established and prevented. “We showed evidence for decline, and raised alarm,” Dr. Levine wrote in an email. “We need to study the causes, including the unlikely possibility of non-pathological decline.”

There was one point that every author agreed on: Men’s reproductive health matters. And until now, it has been surprisingly neglected.

Male infertility contributes to at least half of all cases of infertility worldwide. Yet historically, women have shouldered most of the blame for the inability to conceive. And with the rise of reproductive technologies like in vitro fertilization, women’s bodies are the ones that have been meticulously measured and tracked by reproductive medicine.

As a result, science still lacks basic knowledge when it comes to sperm, said Rene Almeling, a sociologist of medicine and author of “GUYnecology: The Missing Science of Men’s Reproductive Health.” For instance, just this year, researchers reported for the first time that sperm swim in a corkscrew motion, rather than undulating like eels.

“We have built up such a medical infrastructure around the fertility and reproductivity of women’s bodies that we haven’t asked some of the basic questions about men’s reproductive health,” Dr. Almeling said. “There is just so, so much basic research still to be done about sperm.”

The main qualities of sperm that infertility specialists look at nowadays — how many, what shape and how they swim — have not changed in the past 40 years, said Dr. Abraham Morgentaler, a urologist and founder of Men’s Health Boston.

Dr. Morgentaler, who worked at a semen analysis lab at Beth Israel Deaconess Medical Center in the 1980s, attributes this stagnation to the rise of I.V.F. and other reproductive technologies, which have become frontline treatments for almost any male factor fertility problem. “It almost doesn’t even matter what’s wrong with the sperm,” he said.

These knowledge gaps radiate out to all bodies. In fact, Dr. Swan said part of her motivation for writing the book was that she wanted to see the public — men and women — become more proactive about their reproductive health.

“It’s invisible,” she said. “People don’t talk about it. You talk about, ‘Oh, I’ve got a high cholesterol measure,’ or ‘My blood pressure’s up.’ But you never would say, ‘My egg count is down,’ or ‘My sperm count is down.’”

Dr. Richardson agreed that the impact of reproductive toxins on fertility deserved further investigation. “To say that we think these are alarmist and apocalyptic claims, and they’re not well founded, is not to say that we think it isn’t an important research agenda,” she said. “There is a need to center on men’s reproductive health and understand their bodies as reproductive and as porous to the environment as anyone’s bodies.”