From Ebola to H.I.V. to river blindness, the American pharmaceutical giant Merck has been on the front lines of the biggest public health emergencies in recent history.

So when the company announced last May that it was a late entrant in the race to develop a Covid-19 vaccine, Merck was a popular pick to win. Even if the company wasn’t first, proponents argued, its expertise as the world’s second-largest vaccine maker gave it a good shot at developing the best product — and manufacturing it quickly.

But then, last month, Merck exited the vaccine race, abandoning its two candidates after early clinical trials flopped. Now, in addition to testing two experimental Covid-19 drugs, the company says that it’s looking for ways to help competitors supply the world with vaccines.

Merck did not provide details about which companies or governments it planned to work with, or how it would help. But as a major vaccine maker, it has factories that specialize in a range of vaccine technologies, as well as ones that fill the bulk product into ready-to-ship vials.

Mr. Nally’s statements follow weeks of speculation in which industry insiders and public figures have called on Merck to do more to help with the vaccine effort, as demand outstrips supply and contagious variants boom around the globe.

“Merck tried to make a vaccine, didn’t succeed,” Bill de Blasio, the mayor of New York City, said earlier this month. “And now they’re going to go off and do other types of drugs. Well, I disagree. I think the federal government should say, no, Merck, you’re producing the vaccines we have now because we have a massive shortage.”

Officials in both the Trump and Biden administrations have considered enlisting Merck’s help in manufacturing vaccines developed by Pfizer and Johnson & Johnson.

Merck is now considering a range of options, both in the United States and around the world, mindful that anything it chooses to do would take months to bring to fruition, given the complexity of the manufacturing process. For the United States, that could mean shoring up supply later in the year or supplying booster shots needed to fight emerging variants. For other countries that do not have enough vaccines to immunize their populations, Merck’s support could be even more significant.

Given the unknowns about how long current vaccines will work, as well as the spread of variants that may make them less effective, “I think there’s a broader recognition, certainly within the U.S. government, but governments around the world, that this is a bit more complicated than we had at one time thought,” Mr. Nally said. “If there’s a way that we can help think through that, and prepare the world for what we see on the horizon, that’s where we’re focused.” 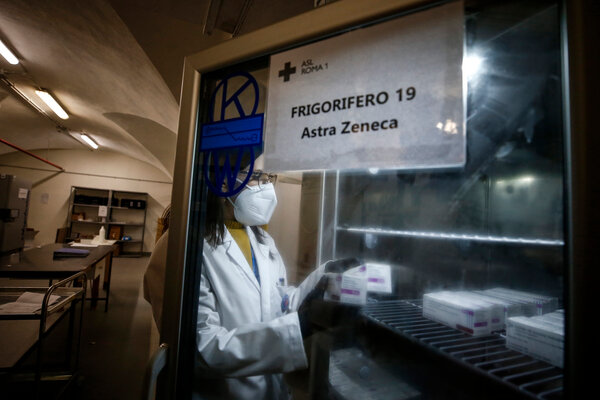 The turn of events leaves Merck — which brought in $8.3 billion in revenue from vaccines in 2020, second only to GlaxoSmithKline in global vaccine sales — without a starring role in the biggest public health crisis in a century. The spotlight is instead on a major competitor, Pfizer, and an upstart, Moderna, which developed two highly effective vaccines in record time, using a new technology known as mRNA.

“It is really interesting to see what Merck will do next,” said Ronny Gal, a pharmaceutical analyst with the Wall Street firm Bernstein, noting that in abandoning its Covid-19 vaccines, the company has conceded that its technology could not compete with the newer mRNA methods. “And since they have a very large vaccine business, they kind of have to do something.”

Merck has lagged its competitors for a range of reasons, experts say. Early talks with the University of Oxford about a partnership to develop its vaccine fell through, with the university researchers later choosing AstraZeneca. And Moderna chose not to partner with a bigger drug maker on its Covid-19 shot, despite a collaboration with Merck on other vaccines. (Merck has profited from Moderna’s success, however: It sold its stock in Moderna late last year, after Moderna’s share price had skyrocketed.)

Merck may have also simply been a victim of bad luck, as vaccine development is notoriously unpredictable. Sanofi and GlaxoSmithKline, major vaccine makers that have partnered on a Covid-19 vaccine, experienced a major setback when their shot failed to work on older people.

“I was very encouraged when Merck announced their commitment, because I have a high degree of confidence that Merck has what it takes, from a capability perspective and from a corporate commitment to global health,” said Margaret McGlynn, the former president of global vaccines at Merck, who is now on the board of Novavax, a small Maryland company that is developing a Covid-19 vaccine. “But you can only tell what’s going to work by doing the trials.”

Merck, which was founded in 1891, has been in the vaccine business for more than 100 years, having developed some of the world’s most well-known vaccines, including those for mumps, hepatitis A and chickenpox. In 2019, it was the first company to win approval from the Food and Drug Administration for an Ebola vaccine.

When the coronavirus began spreading around the world, however, Merck was slow to announce plans for a vaccine. By the time it provided details about two vaccine candidates in late May, most of its major competitors had already announced deals, and Pfizer and Moderna had already begun early clinical trials.

But Merck didn’t have to be first to win. Executives decided to pursue two projects that they felt had advantages over competitors. One vaccine, developed in partnership with the International AIDS Vaccine Initiative, would rely on the same technology, based on a harmless livestock virus, that had yielded their successful Ebola vaccine. The other, acquired through a purchase of Themis Bioscience, was based on an existing measles vaccine.

What You Need to Know About the Vaccine Rollout