The Food and Drug Administration on Monday approved the first new medication for Alzheimer’s disease in nearly two decades, a contentious decision, made despite opposition from the agency’s independent advisory committee and some Alzheimer’s experts who said there was not enough evidence that the drug can help patients.

The drug, aducanumab, which go by the brand name Aduhelm, is a monthly intravenous infusion intended to slow cognitive decline in people in the early stages of the disease, with mild memory and thinking problems. It is the first approved treatment to attack the disease process of Alzheimer’s instead of just addressing dementia symptoms.

Recognizing that clinical trials of the drug had provided incomplete evidence to demonstrate effectiveness, the F.D.A. granted approval on the condition that the manufacturer, Biogen, conduct a new clinical trial.

During the several years it could take for that trial to be concluded, the drug will be available to patients, the agency said. If the post-market study, called a Phase 4 trial, fails to show the drug is effective, the F.D.A. can — but is not required to — rescind its approval.

Patient advocacy groups had lobbied vigorously for approval of the drug because there are so few treatments available for the debilitating condition and other drugs in clinical trials, while more promising, are most likely three or four years away from potential approval.

But the F.D.A. advisory committee, along with an independent think tank and several prominent experts — including some Alzheimer’s doctors who worked on the aducanumab clinical trials — said the evidence raised significant doubts about whether the drug is effective. They also said that even if aducanumab could slow cognitive decline in some patients, the benefit suggested by the evidence would be so slight that it would not outweigh the risk of swelling or bleeding in the brain that the drug caused in the trials.

The F.D.A. authorized the drug under a program called accelerated approval, which has been applied to therapies for some cancers and other serious diseases for which there are few, if any, treatments.

In 2012, the F.D.A. revoked its approval of the drug Avastin as a breast cancer treatment after additional studies did not show enough benefit. But some other cancer drugs have retained approval even though additional trials failed to confirm the drugs were beneficial. The agency has also been criticized in the past for failing to make sure the follow-up studies are done.

Alzheimer’s trials are already challenging to conduct because it is often difficult to recruit enough participants. Because the condition can progress very gradually, trials need to be large and continue for many months in order to be able to see if a drug is slowing cognitive decline.

Several experts expressed skepticism that Biogen would be able to recruit many participants in the United States for a post-market trial because patients who can get a drug from their doctors are often reluctant to take the chance of receiving a placebo in a clinical trial. 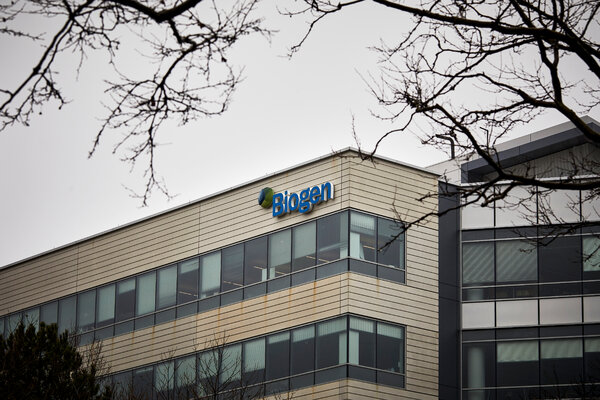 “Once the product is approved, the cat’s out of the bag, the horse is out of the barn,” said Dr. G. Caleb Alexander, a member of the F.D.A. advisory committee, who is an internist, epidemiologist and expert on drug safety and effectiveness at the Johns Hopkins Bloomberg School of Public Health. “There’s no way to recover the opportunity to understand whether or not the product really works in the post-approval setting.”

Companies can conduct post-market trials with participants from other countries, but may face similar challenges recruiting participants if those countries approve the drug before trials are completed. Aducanumab has not yet been approved outside of the United States, but Biogen has filed for regulatory review in the European Union, Japan, Brazil and elsewhere.

Aducanumab, a monoclonal antibody, targets a protein, amyloid, that clumps into plaques in the brains of Alzheimer’s patients and is considered a biomarker of the disease. One thing both critics and supporters of approval agree on is that the drug substantially reduces levels of amyloid, and the F.D.A. said that the drug’s effect on a biomarker qualified it for the accelerated approval program.

Still, reducing amyloid is not the same thing as slowing symptoms of dementia. Over more than two decades of clinical trials, many amyloid-reducing drugs failed to address symptoms, a history that, some experts say, made it especially important that aducanumab’s data be convincing.

Biogen officials said that the drug provided long-awaited support for a theory that attacking amyloid can help if done early enough. Supporters of approval also said that it’s possible that clearing amyloid early on could help rein in the disease down the road, providing additional benefit beyond slightly delayed early decline. But Alzheimer’s experts note that supposition is completely untested.

About two million Americans may fit the description of the patients the drug was tested on: people in the early stages of Alzheimer’s or the stage just before that, Alzheimer’s-related mild cognitive impairment. About six million people in the United States and roughly 30 million globally have Alzheimer’s, a number expected to double by 2050. Currently, five medications approved in the United States can delay cognitive decline for several months in various Alzheimer’s stages.

Experts anticipate there will be tremendous demand for aducanumab from patients desperate to try any approved medication.

The drug’s manufacturer, Biogen, is expected to reap billions of dollars from aducanumab. The company has yet to announce a price, but it could be in the range of $10,000 to $50,000 per patient per year, Wall Street analysts project. Beyond that, there will most likely be tens of thousands of dollars in costs for diagnostic testing and brain imaging.

Because Alzheimer’s primarily affects older people, most costs are expected to fall to Medicare’s Part B program. Medicare has not yet said how it would cover the drug and its associated costs. The program does not generally pay for PET scans that may be needed to detect whether patients have amyloid levels that indicate if they have mild Alzheimer’s-related impairment.

The crux of the controversy over aducanumab involved two Phase 3 trials with results that contradicted each other: One suggested the drug slightly slowed cognitive decline while the other trial showed no benefit. The trials were stopped early by a data monitoring committee that found aducanumab didn’t appear to be showing any benefit. Consequently, over a third of the 3,285 participants in those trials were never able to complete them.

Biogen later said that it had analyzed additional data and concluded that in one of the trials a high dose of aducanumab could delay cognitive decline by 22 percent or about four months over 18 months. In the trial’s primary measurement, the high dose appeared to slow decline by 0.39 on an 18-point scale rating memory, problem-solving skills and function. A lower dose in that trial and high and low doses in the other showed no statistically significant benefit over a placebo.

“There’s so little evidence for effectiveness,” said Dr. Lon Schneider, director of the California Alzheimer’s Disease Center at the University of Southern California and one of many site investigators who helped conduct one of the aducanumab trials. He added, “I don’t know what caught the F.D.A.’s fancy here.”

At the time of the advisory committee meeting, in November 2020, there was not unanimity within the F.D.A. itself. An F.D.A. clinical analyst said there was a sufficient case for approval, but an F.D.A. statistician wrote that another trial was needed because “there is no compelling, substantial evidence of treatment effect or disease slowing.”

After the advisory committee’s blistering rejection, the F.D.A. extended its decision deadline by three months and sought additional information from Biogen, which hasn’t said what it submitted.

Biogen and some researchers who favored approval of the drug said that given the need for Alzheimer’s medications, the single positive trial, plus results from a small safety trial and aducanumab’s ability to reduce amyloid justified making it available to patients now.

Dr. Stephen Salloway, who has received research and consulting fees from Biogen but wasn’t paid for being an aducanumab trial site principal investigator, said that while he understood the concerns about the data, “the totality of the evidence favors approval, and F.D.A. approval will open the door to a new treatment era for Alzheimer’s disease that we can build on.”

The F.D.A. typically follows advisory committee recommendations and usually requires two convincing studies for approval, but it has made exceptions, especially for severe diseases that lack treatments. But some experts worry that aducanumab’s approval could lower standards for future drugs, allowing them onto the market before experts in the field are convinced the benefits outweigh any safety risks.

The risks with aducanumab involve brain swelling or bleeding experienced by about 40 percent of Phase 3 trial participants receiving the high dose. Most were either asymptomatic or had headaches, dizziness or nausea. But such effects prompted 6 percent of high-dose recipients to discontinue. No Phase 3 participants died from the effects, but one safety trial participant did.

Similar side effects have occurred in trials of previous amyloid-lowering drugs, but doctors consider them manageable if a patient is evaluated regularly with brain scans. Still, even supporters of approval said that conducting such safety monitoring was more difficult when not done in the carefully controlled regimen of a study.

“It’s going to be challenging when it’s applied more broadly, outside of a clinical trial,” said Dr. Salloway, director of neurology and the Memory and Aging Program at Butler Hospital in Providence, R.I.

Biogen is expecting to launch the drug quickly, with more than 600 sites across the country expected to administer it. Clinics for patients with cognitive problems have been scrambling to prepare.

Dr. Jeffrey Burns, director of the University of Kansas Health System’s memory clinic and a site investigator for one trial, said he expected “the phone to be ringing off the hook.” He estimates 25 to 40 percent of the clinic’s roughly 3,000 patients might be eligible, but it doesn’t have enough neurologists.

Several Alzheimer’s doctors who believe the case for approving aducanumab is too weak said they would now feel ethically compelled to make it available. They believe that many patients, even when told of the problematic evidence, would try the drug because they would assume there was a compelling reason it received F.D.A. approval.

“I had this conversation with a real patient who was very interested in it,” said Dr. David Knopman, a clinical neurologist at the Mayo Clinic and a site principal investigator for one trial who co-wrote an article saying the evidence was insufficient to show benefit. “I presented the data to the patient and her husband, and they didn’t hear a word I said about my concerns. All they heard was there might be benefit.”