The mob that stormed the Capitol yesterday did not just threaten the heart of American democracy. To scientists who watched dismayed as the scenes unfolded on television, the throngs of unmasked intruders who wandered through hallways and into private offices may also have transformed the riot into a super-spreader event.

The coronavirus thrives indoors, particularly in crowded spaces, lingering in the air in tiny particles called aerosols. If even a few extremists were infected — likely, given the current rates of spread and the crowd size — then the virus would have had the ideal opportunity to find new victims, experts said.

“It has all the elements of what we warn people about,” said Anne Rimoin, an epidemiologist at the University of California, Los Angeles. “People yelling and screaming, chanting, exerting themselves — all of those things provide opportunity for the virus to spread, and this virus takes those opportunities.”

President Trump has downplayed the pandemic almost since its beginning, and many of his supporters who entered the Capitol yesterday did not appear to be wearing masks or making any effort at social distancing. Under similar conditions, gatherings held in such close quarters have led to fast-spreading clusters of infection.

But transmission of the virus has always been difficult to track. There is little effective contact tracing in the United States, and many in the crowd at the Capitol arrived from communities far from Washington.

The Black Lives Matter protests in the summer raised similar concerns. But most were held outdoors, and greater numbers of participants seemed to be masked. Research afterward suggested these were not super-spreading events.

Attendees of the rally preceding the rush to the Capitol on Wednesday also stood outdoors close together for hours, but “I’m less worried about what was happening outdoors,” Dr. Rimoin said. “The risk increases exponentially indoors.” 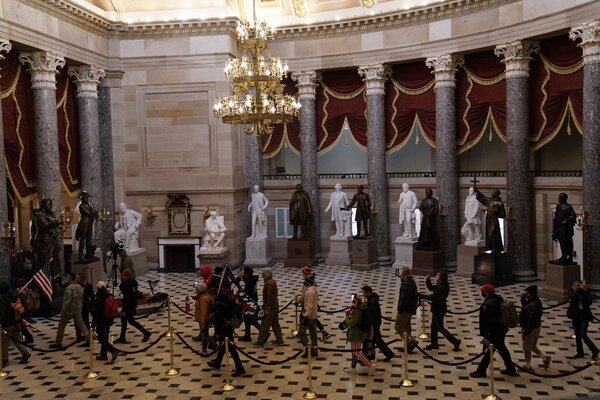 Hundreds of rioters shouting in crowded rooms and hallways for extended periods of time can infect dozens of people at once, she and other experts said.

Three distinct groups — Capitol Police, rioters and members of Congress — “were spending time indoors, without social distancing, for long periods of time,” said Dr. Joshua Barocas, an infectious diseases physician at Boston University. The melee likely was a super-spreader event, he added, “especially given the backdrop of the highly transmissible variants that are circulating.”

Dr. Barocas was referring to a highly contagious new variant of the coronavirus, first identified in Britain. It has been spotted in several U.S. states but may well have spread everywhere in the country, making events like the Capitol riot even more risky, he said.

The idea that members of Congress may have been exposed, amid an already difficult transfer of power, particularly disturbed some scientists. “I am worried not only that it could it could lead to super spreading, but also super spreading to people who are elected officials,” said Dr. Tom Ingelsby, director of the Center for Health Security at Johns Hopkins University.

And infected members of Congress and law enforcement could have spread the virus to one another as they sheltered from the violence, he noted.

Rep. Jake LaTurner, Republican of Kansas, announced on Twitter early Thursday morning that he had tested positive for the virus. Mr. LaTurner was cloistered in the chamber with other members of Congress for much of the day.

At least a dozen of the 400 or so lawmakers and staff who were huddling in one committee room refused to wear masks even after being offered one, or wore them improperly below their chins, said Representative Susan Wild, Democrat of Pennsylvania.

They gathered in a committee room that quickly became crowded, making social distancing impossible, she said. Some of the lawmakers were unmasked, and several were shouting: “Tensions were high, and people were yelling at each other.”

“I just started getting really kind of angry, thinking about the holidays just passed, and how so many people did not spend time with their immediate families for fear of spreading,” she added, referring to her unmasked colleagues.

Representative Debbie Dingell, Democrat of Michigan, said the environment made her so nervous she sat on the floor at one point, hoping to duck whatever virus might be floating about. She has asked experts whether the lawmakers present should now quarantine, she said. She was wearing two masks, as she often does.

“I get that they think they have their individual freedoms,” she said of Republican lawmakers who eschewed masks. “It’s a rule for a reason. It’s to protect the common good.”

The risk for members of Congress will depend greatly on ventilation in the room where they sheltered, said Joseph Allen, an expert on buildings quality at the Harvard T.H. Chan School of Public Health in Boston.

“If there is a well-designed secure facility, then it would have great ventilation and filtration,” Dr. Allen said. “If it’s a place where they were just hunkered down wherever they could go that was safe, and it was not a place that was designed like that, then we don’t really know.”

It’s natural in a heart-pounding crisis to disregard risks that seem intangible or theoretical, he and other scientists noted.

“You cannot keep distance if you’re trying to leave a very intense and dangerous situation,” said Seema Lakdawala, an expert in respiratory virus transmission at the University of Pittsburgh. “You’re weighing the risk of your life over the risk of getting a virus at that moment.”

Members of Congress returned to continue the electoral count after the rioters were cleared from the Capitol. Some legislators took off their masks before giving a speech, Dr. Barocas noted, at precisely the time they needed to wear them. Talking at a high volume can expel vast quantities of aerosols, propelling them through an enclosed space.

Scientists have documented infectious aerosols suspended in air nearly 20 feet from an infected person. And a recent study from South Korea found that two people had become infected after spending just five minutes in a restaurant, 15 feet away from an infected patron.

Many Americans breathed sighs of relief as rioters departed the Capitol. Some experts feared that rioters heading back home could set off new chains of infection, perhaps impossible to track.

“We might get an inkling into how bad it might be because of the federal employees,” Dr. Barocas said. But “I don’t think that we’re going to know the extent of this super-spreader event.”

Even as the mob stormed the Capitol on Wednesday, the pandemic marked a grim milestone: The virus claimed nearly 4,000 lives, the highest daily toll thus far. The numbers are expected to keep rising.

The president has “created a culture in which people think it’s a hoax, and these basic control measures are being flouted repeatedly everywhere,” Dr. Allen said.