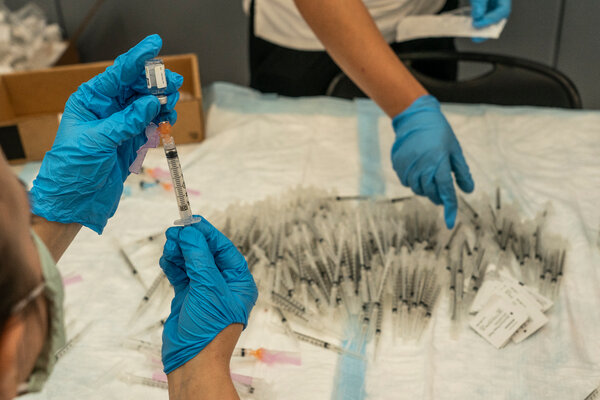 By The New York Times

An advisory committee for the Centers for Disease Control and Prevention will meet on Wednesday afternoon to discuss whether the Johnson & Johnson Covid-19 vaccine should remain paused while a possible link to rare blood clots is investigated.

The emergency meeting follows the Food and Drug Administration’s announcement on Tuesday that it was studying six cases of rare and severe blood clots in women aged 18 to 48, one of whom died. All of the women had received the Johnson & Johnson vaccine before developing the clots, though it is unclear whether the vaccine is responsible. As of Tuesday, more than seven million people in the United States have received the shot, and another 10 million doses have been shipped out to the states, according to C.D.C. data.

Following the call from federal health agencies, all 50 states, Washington, D.C., and Puerto Rico on Tuesday quickly paused or recommended that providers pause the administration of the vaccine. The U.S. military, federally run vaccination sites, and a host of private companies, including CVS, Walgreens, Rite Aid, Walmart and Publix also paused the injections.

The Advisory Committee on Immunization Practices, or ACIP, is a panel of independent experts who advise the C.D.C. on its vaccine policies. At the meeting, the experts will be reviewing and debating the data from the six cases, and listening to comments from the public, before taking a vote on how to proceed. They could vote to recommend that the pause continues, for example, or to specify that it should apply only to a certain age or sex.

Federal officials said on Tuesday that the pause might last only a few days, though it depended on what officials learned in the investigation. The pause was called for in part because patients who have these rare blood clots should not be given the standard treatment that doctors prescribe for typical clots.

The clotting disorder of concern in the vaccine recipients is different — and much rarer — than typical blood clots, which develop in hundreds of thousands of people every year. The six women had not only clotting in the brain, but a notably low level of platelets, parts of the blood that help form normal clots.

The U.S. surgeon general, Dr. Vivek Murthy, reiterated on Wednesday that the pause in Johnson & Johnson vaccinations gives public health officials a chance to investigate the cases and discuss with health care professionals. He added that pauses are common when new vaccines and drugs are rolled out.

“We’re just doing the due diligence we need to do to make sure everything is safe so we can continue with our vaccination efforts,” Dr. Murthy said on “CBS This Morning.”

The committee’s assessment will be crucial at a time when the nation is racing to vaccinate as many people as possible to curb the steady accumulation of cases, particularly as worrisome variants gain traction. Some public health experts were disappointed in the F.D.A.’s recommendation to suspend the Johnson & Johnson vaccine, arguing that preventing these extremely rare side effects was not worth the trade-off of slowing the vaccination campaign and potentially eroding the public’s trust of vaccines in general.