I’ve seen enough movies to know what to expect from a taskmaster like Kevin Toonen. As the strength and conditioning coach for the Australian Special Forces, he’s sure to play the hard bastard as he puts a colleague and me through a military-style workout. I’m predicting he’s going to shove that bushy beard of his right in our grills, spitting insults like “pathetic maggot” and “worthless piece of shit” into our sweat-soaked dials.

Sounds like fun, in a Heartbreak Ridge kind of way. Intercepting us inside Sydney’s 98 Riley St Gym, Toonen is as stocky and immovable as a rugby hooker. His handshake is firm; his gaze cool and appraising: you have the sense he has instantly identified your weak points. If this were battle, if Toonen were the enemy, my next of kin would be getting a telegram in the next day or two.

“OK, you two,” he says after minimal pleasantries, “get changed.”

Over the next hour, Tooney demonstrates an approach to training that could change the way you think about fitness, especially the why of it. He also tells it straight on what it means to be a man who’s useful, capable and self-assured.

To make it into the Special Forces, which includes the Special Air Service Regiment (SAS), two Commando Regiments and five other specialist units, you have to get past former soldier Toonen. That means not only measuring up physically but also proving yourself a cool head who would bury your ego for the good of the unit. While nearly all applicants come from the army, navy or air force, it’s possible to make it into the Special Forces from outside the defense umbrella.

According to the ADF, serving in these elite units entails complex and dangerous missions that could happen anywhere in the world – though read that as Afghanistan and Iraq for most of this century. Even more than your average soldier, SF members need to be resilient, resourceful, quick thinking. When it comes to picking them, Toonen’s job is to sift the exceptional from the merely impressive.

Even for Special Forces guys, workouts begin slowly, with Toonen meticulous about activating muscles before forcing them to perform. We warm up by walking – forwards, backwards, sideways – with resistance bands encircling our ankles. We stretch, lunge and jump. Sure enough, Toonen calls our flexibility “pathetic” and our first go at standing broad jumps “atrocious.”

The session’s shock-and-awe element is a barrage of squats: 10 sets of 10 repetitions performed every minute on the minute while clutching a 35-kilogram dead ball to our chests.

Channeling Private Benjamin, I baulk at the 35kgs’ resistance. “I’m on the mend from a back injury,” I tell Toonen, “and that’s nearly half my bodyweight.” The coach conceals what I interpret as contempt behind a mirthless snort while plonking a significantly lighter ball at my toes.

If this were a Special Forces Screen Test – stage one in the selection process – I would have flunked already. I’d have been better served at least having a crack with the heavier ball, even if I’d got stuck underneath it, splintered my spine and left the gym on a stretcher. As it is, I’ve squibbed the challenge. Raised the white flag.

“We use physical stress to test the mind,” says Toonen. “We want to take it to the edge, past people’s perceived limits of themselves.”

Only then, explains Toonen, do you see what a man’s made of. “Behind that everyday façade, everyone saves 20-30 per cent for a rainy day. We want to expose that all the time. We want to know whether you’ll give us 100 per cent. Not the 100 per cent you think you have. But the 100 per cent where, at the end of the task, you say to yourself, I would never have thought I could do that.”

The takeout: Special Forces takes only very fit people. But there’s something it values higher: sheer will to prevail. 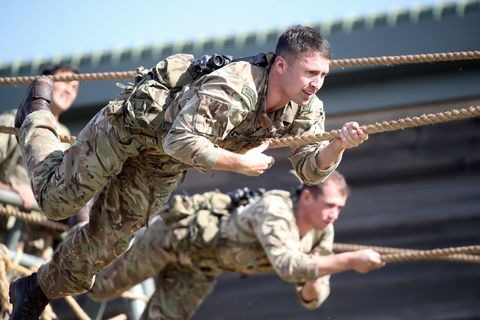 The Special Forces Screen Test involves a range of physical assessments and a panel interview. Certain characteristics, in excess, are disqualifying. These include selfishness, vanity, diffidence and, broadly, mental fragility. Do you lose your shit if you miss a meal? Does your mind go blank when you’re required to do mental arithmetic while puffed? Yes and yes? Your papers are marked.

Guys tend to crack Special Forces in their 30s. Younger than that and chances are you lack the necessary maturity. Older and your body’s in decline, soldier.

Special Forces selectors don’t care what you look like. Nor do they want a close-up view. Take your shirt off in one of their gyms, Toonen says, and you’ll be heckled until you’re scurrying out the door.

Nor do your lifting PBs count for jack, Toonen continues. Selectors will either judge you sufficiently robust to stay in contention, or they won’t. There are no bonus points – not even a pat on the back – if you can clean-and-jerk a walrus. More important is that you have, or are close to attaining, the kind of fitness that is transferable to the theatre of war.

“We need speed, aggression and violence of action,” says Toonen. “And that all comes through the physical body. The faster you are from A to B, the lower your chance of being shot.”

The way you prepare for selection won’t be the way you train once you’re in the Special Forces, Toonen says. You could look at selection as the toughest physical test you’ll ever put yourself through – “something you’ll only ever want to do once. It takes a massive toll on the body”.

He’s talking about what happens if you pass the Screen Test and advance to a Selection and Training Course, where you’ll spend multiple weeks operating at the limits of your capabilities. Only about 20 percent of participants pass this stage.

Once entrenched in your Special Forces unit, you will be cut some slack from time to time, Toonen reassures. “Deployments come and go. We know there’ll be periods when you’ll eat bad and sleep bad. You’ll have kids and relationship breakdowns. Good days, bad days. You’ll have an injury and need to back off.

“But if the trend is always going forward, if you’re always trying to get better than you were yesterday, that’s all we want. And that will leak into every part of your life.”

By now it should be clear that my Clint Eastwood-fueled preconception of Toonen is off the mark. Throughout our workout, despite numerous opportunities, he never launches into a tirade of abuse. Why not? “Because there’s no value in it,” he says. The military realized this long ago. Belittle a man when he’s trying to master a skill and you risk his forever associating that activity with ineptitude and humiliation. That helps no one. Except your enemy. 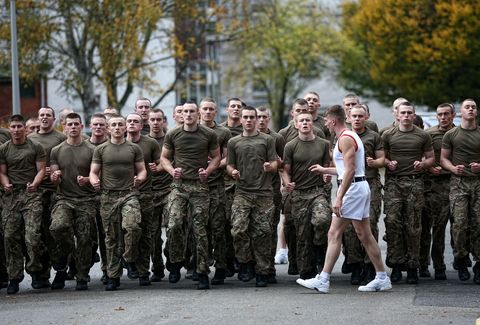 If you want to train Special Forces-style, focus below the waist, advises Toonen, particularly the muscles you can’t see in the mirror: glutes, hamstrings, calves. These provide speed and power.

Despite what he said about lifting PBs, Toonen offers this: “If you can back-squat 200 kg and I can back-squat 100 kg, and we both have a 30kg pack on our back, who’s going to find it easier? You will. Because you won’t have to work as hard. The load is the same for both of us but I’m weaker, so I therefore have to work harder and my V02 goes through the roof. I have to have more stops, more water and more food. Lower-body strength matters. And when I say strength, I don’t mean size. You can be a really strong guy and not have a lot of size on.”

Whether you’re in the Special Forces or the chess club, you have a responsibility to be as fit as you can be, Toonen says. You want to know that whenever your time comes to step up, you’ll be ready.

That need to feel capable doesn’t fade when you leave the military. “You know,” he says, “to me now the scariest thing would be this: what if one day I’m unable to help someone in a house fire or a car crash? What if I physically couldn’t help someone in need? That’s the way my background carries over for me now.”

The squatting over, Toonen lets us get our breath back for a few minutes before tackling a push-up assignment. I ask him how training looks different when your focus is everything to do with performance and nothing to do with aesthetics.

It’s simple, he says: you train to the best of your ability. Take a session of deadlifts. “I want to make each rep look perfect,” he says. “I want to make sure that each set feels like it should do. I’ll also take ownership of the fact that if I have bad technique, if I get a sore back, then it’s not the deadlift’s fault – it’s mine. I need to learn more. I need to figure out why I’ve got a sore back, rather than saying deadlifts are bad for my back. Because everyone knows that’s bullshit.”

The other component is intensity. Toonen asks me to define 100 per cent effort. I say something about taking the last set of each exercise to failure. He nods. “To me,” he says, “100 percent is passing out and falling over. That’s what it is. Commit to something. That’s the joy of exercise. It’s your time. You’re responsible for the movement and the results.

“Train hard like this and it’s going to feel like a train has hit you. Then you’ve got to rest. Come back, refocus and go again. It’s going to scare you the next time that exercise protocol is on the agenda. How do you walk into that session knowing that last time you failed miserably? Are you going to walk in with your head high and try even harder? You should. You should say, ‘I suck at this, but this time I’m going to take it harder’.”

My colleague, Aaron Scott, performs well on the squat challenge, falling short only in his last set. And in a state of advanced fatigue he goes close to producing the 60 cadence push-ups that Toonen suggests we aim for.

If this were a legitimate Screen Test, Scott wants to know, would he still be in the running?

“You’re strong,” Toonen says, but then there’s a “but” and a few comments that amount to a diplomatic non-answer. I report to Toonen the next day that we’re both wracked with DOMS. He laughs.

“That’s what we call a combat indicator,” he says. “More strength is needed!”

Achieve elite shape with this workout designed by Toonen.

Work up to a heavy 2R M. (This should take you between 6-8 sets.) Rest as needed between sets