Bend It Like Beckham may be a classic film, but in writer and footballer Ella Braidwood’s experience, it doesn’t go far enough in exploring how powerful the game has been in connecting LGBTQ+ women and non-binary people.

Before telling my family and school friends, I first came out as a lesbian to a player on my football team. I was 17, and chose to do it via SMS message. As I lived in a village in Cumbria, that meant holding my Sony Ericsson up to my bedroom window, one of the few spots where I had phone signal, frantically waiting for her reply.

She was, of course, supportive – she was one of several openly gay players at my club. With her and other teammates, I had already ventured into my first gay bar, the now-closed Outrageous in Carlisle, an experience that was equally electrifying as it was terrifying. For the first time, I felt able to talk to others – albeit very gradually – about my sexuality.

Football has always been a place where I have found a community as a lesbian. While football is for everyone – of every sexuality and gender identity – I think the LGBTQ+ inclusivity embedded throughout the women’s game is something to be celebrated.

As much as I love the film Bend It Like Beckham, it didn’t quite reflect my complete experience of the game: the queer love, clandestine hook-ups and, of course, lesbian drama. I will never forget one match, aged 18, when a teammate walked off mid-game because of an on-pitch argument with her girlfriend, who was also playing.

At my current club in east London (Tower Hamlets WFC), which I joined in 2016, I’ve watched players meet and fall in love on the team. I have seen, too, teammates feeling able to embrace their sexuality in a similar way that I did. Together, we’ve gone to Pride marches in Brighton and London, and braved the murky depths of gay superclub Heaven. More recently, a splinter group of us have set up a lesbian book club (with an honourary bisexual man – my flatmate).

Football has also given a community for other LGBTQ+ women and non-binary people. For Lauren Pollard, who joined Stonewall FC earlier this year, the inclusivity of their club meant that – for the first time – they felt able to come out as non-binary. (The team is named after the 1969 Stonewall uprising in New York, which paved the way for the modern LGBTQ+ rights movement.)

“This was actually the first space that I ever openly used my pronouns, and actually came out as non-binary,” they tell Stylist. “So that was a huge thing for me, and I honestly could not have done it to a better group of people. They just welcomed me with open arms. I’ve had my identity and pronouns completely respected, without even a second thought.”

Pollard plays for Stonewall FC’s women and non-binary development team in the Super 5 League, an openly LGBTQ+ friendly league that my club also plays in. Since joining, they’ve thrown themselves into the social side of the club, including a recent group trip to watch the Women’s FA Cup Final at Wembley on 5 December. “They are probably the people I spend most of my day talking to, you can’t get rid of them!” they joke.

Pollard praises Stonewall’s inclusive practices, such as players sharing their names and pronouns before games. “For me, the number one thing that always stands out when you talk about Stonewall and inclusivity is that community feeling, almost a family feeling,” they add.

This inclusivity in the women’s game goes to the top of the sport. According to Outsports, more than 40 out women and non-binary football players took part in this year’s Tokyo Olympics, including USA’s Megan Rapinoe, Australia’s Sam Kerr, England’s Rachel Daly and the Netherlands’ Vivianne Miedema. The Canadian player Quinn became the first out transgender and non-binary person to win an Olympic medal after their side snatched gold in a dramatic penalty shootout against Sweden. 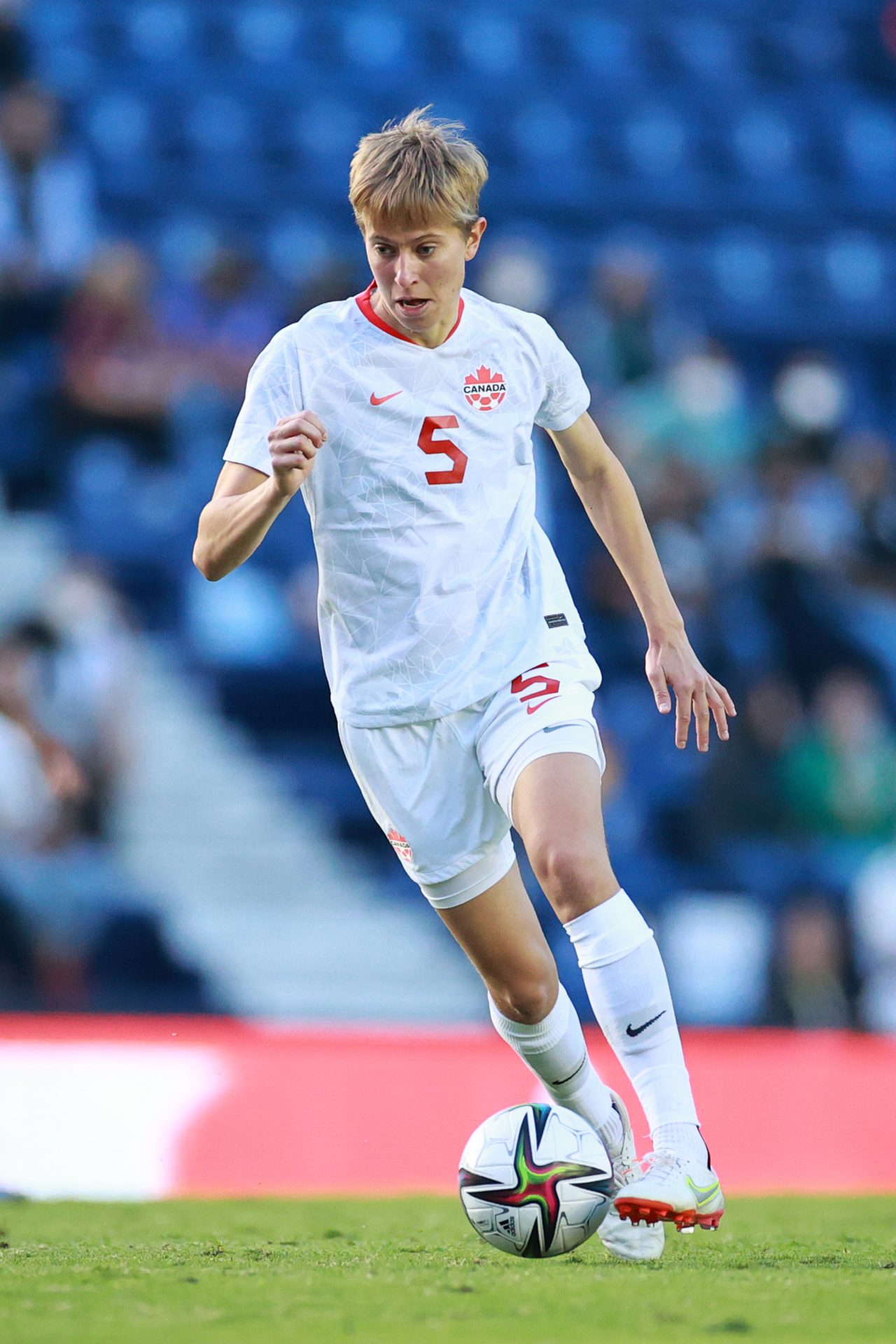 Quinn is the first non-binary person to win an Olympic medal in the sport.

In March, footballer Helen Hardy set up Manchester Laces, which aims to provide an inclusive environment for women and non-binary people wanting to play football in the city, from beginners to experienced players. For Hardy, setting up the club has been “life changing”, and she has been overwhelmed by the positive response.

“It’s been amazing for me as an LGBTQ+ person, but there have been other members, especially non-binary, queer and transgender players, who feel like this is one of the only safe spaces available in Manchester,” she explains. “One of the greatest things about it is not just what happens on the pitch; it’s the community around the pitch that I think is really, really important.”

World Cup 2019: “How the Lionesses brought football home, without winning the trophy”

Activities off the pitch have included going to Women’s Super League matches, local pub trips, and a camping holiday. “Considering we’ve only been going for eight months, I’d say I spend more time with this group of people than I do with my family – sometimes even my own wife,” jokes Hardy, whose wife also plays at Manchester Laces, but is in a different group to her.

“It’s kind of been my everything; it’s so important to me to my mental health. It’s been really crucial and kind of a backbone to a lot of people’s lives to be honest.” Like Stonewall FC, Manchester Laces has set up various practices, including sharing names and pronouns, to embed inclusivity throughout the club.

Football, says Hardy, has repeatedly provided her with a space where she can be herself as a gay woman in the LGBTQ+ community. “Every time I’ve moved to a new city, I’ve immediately wanted to join a football team so that I can feel part of the LGBTQ+ community,” she explains. “So I guess it’s helped me to feel closer to it in a lot of ways.”

For me, being part of a football club helped me to finally embrace my sexuality. It has, too, given me some of my best friends, happiest memories and an inclusive community that I’m proud to be a part of.