Shop Pay Installments is powered by Affirm, the publicly held payment company that enables shoppers to make four, biweekly payments with no interest, hidden fees or late fees. Affirm built the Shop Pay Installment solution to be integrated onto Shopify’s Shop Pay platform, which already offers various services to merchants to measure their sales and monitor their operations. It’s also a move by Affirm to gain market share over competitors in the pay now, pay later apps, such as Klarna and Afterpay.

“We built Shop Pay Installments to give merchants a critical and easy-to-use financial tool to grow their sales,” said Kaz Nejatian, vice president of product and merchant services at Shopify. “Our partnership with Affirm combines their technology and expertise in buy now, pay later with our deep understanding of our merchants’ unique needs and the power of our commerce platform.” Shopify’s platform enables merchants to easily launch online stores and provides a suite of services for marketing, shipping, customer engagement tools as well as payments.

“All businesses – regardless of size – deserve access to technology that can help them grow and succeed, which is why we custom-built Shop Pay Installments in partnership with Shopify,” said Max Levchin, founder and chief executive officer of Affirm. “At a time when consumers are demanding more flexible and transparent payment options, providing a pay-over-time solution that doesn’t hit consumers with late or hidden fees is no longer a nice-to-have, but a must.” 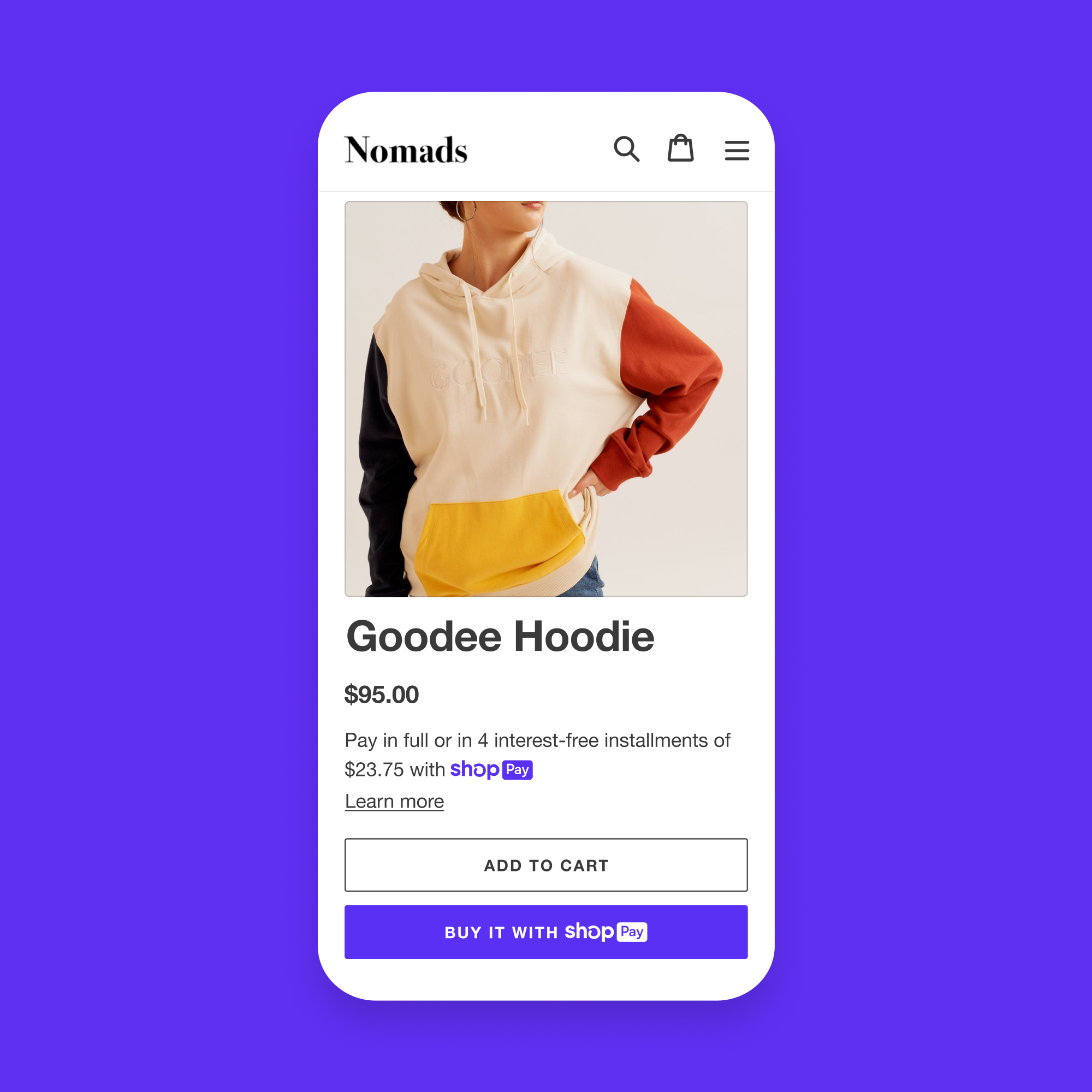 The Shopify-Affirm partnership offers consumers the ability to pay by installments without any interest or hidden fees.

Affirm pays merchants upfront and assumes the risk of collecting payments from consumers. The partnership with Shopify means that “hundreds of thousands” of additional merchants in the U.S. will provide Affirm’s alternative payment solution to shoppers. Any U.S. merchant newly listing on Shopify is automatically enabled with Shop Pay Installments, though Affirm and Shopify have been  building and beta testing the product with early access to a growing number of merchants over time, since the partnership was unveiled last July. As of May 10, there were about 12,500 merchants on Shopify using Shop Pay Installments.

Touting the payment solution, Affirm officials said that one in four merchants using Shop Pay Installments during the beta period saw higher sales, some by as much as 50 percent; that on average, merchants saw 28 percent fewer abandoned carts and higher transaction values, and that their payment system is faster for consumers since they don’t have to fumble with credit cards. According to Levchin, Shop Pay Installments is about 30 percent faster than other payment methods. “Shopify measured it,” said Levchin. “With a credit card, you have to fish it out, type in the 16 digits, and the code on the other side of the card. Credit cards are complicated. With the interest, revolving debt, compounding fees, it all ends up being this soup. You rack up $10,000 in debt and there’s no clear plan out of it.” Shop Pay Installment does ask for a shopper’s shipping address, email address, mobile phone number and birth date, but it stores the information so they only have to enter it once.

“Our average cart size on Shop Pay Installments is double that of regular checkout as more customers are buying larger bundles of our socks,” Daniel Shim, co-founder of Ondo, an ethical sock brand selling no-show, sweat-resistant and non-slip socks, said in a statement. “Having Shop Pay Installments on the same platform where we run our business has helped us get more data-driven, leading us to launch new products for the summer,” said Shim.

“Because we don’t charge late fees, there’s no interest, it’s simpler and faster than credit cards, all that results in people feeling more confident, so they spend a little more,” said Levchin. “A merchant that turns on Shop Pay Installments sees an average ticket goes from $100 to $150. We have lots of data points showing that this is real. It’s not magical.”

Levchin also said that Affirm hasn’t seen an increase in delinquent payments during the pandemic, though he acknowledged that paying merchants upfront and assuming the collection of payments is “high risk” for Affirm. The company’s most recent earnings report indicated an approximate 5 percent allowance to cover estimated delinquencies.

“If someone is late, we work with them instead of profiting from them,” Levchin said. “We remind them when they are behind. If they tell us they just can’t pay, we won’t charge them anymore, but you can’t transact through Affirm until you are current. We will call you and text you and will turn off your ability to transact. But 90 percent of those who are late on bills are not doing it to take advantage of Affirm’s policy. They have legitimate reasons for being late.”

Citing the 2021 Global Payments Report by Worldpay, Levchin said buy now, pay later has an under 2 percent penetration in the U.S., and that the partnership with Shopify marks “a real moment to have it go mainstream.” 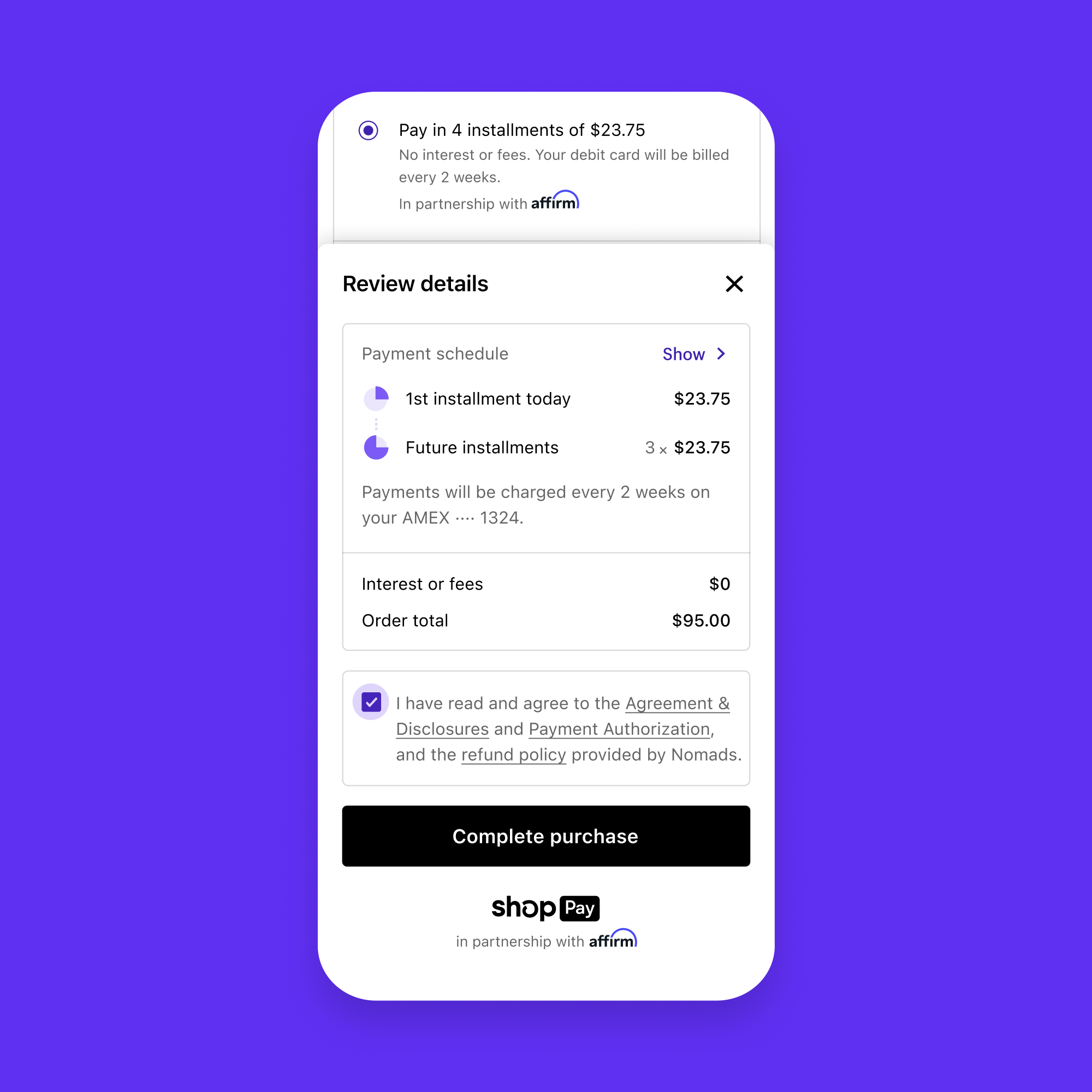