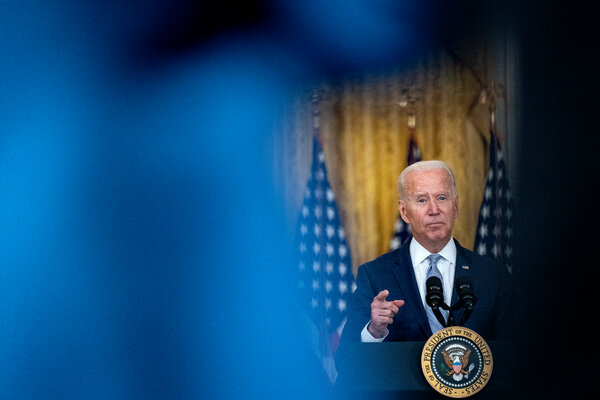 President Biden is encouraging states with stubbornly high jobless rates to use federal aid dollars to extend benefits for unemployed workers after they are set to expire in early September, administration officials said on Thursday, in an effort to cushion a potential shock to some local economies as the Delta variant rattles the country.

Enhanced benefits for unemployed workers will run through Sept. 6 under the $1.9 trillion economic aid bill enacted in March. Those benefits include a $300 weekly supplement for traditional benefits paid by states, additional weeks of benefits for the long-term unemployed, and a special pandemic program meant to help so-called gig-economy workers who do not qualify for normal unemployment benefits. Those benefits are administered by states but paid for by the federal government. The bill also included $350 billion in relief funds for state, local and tribal governments.

Mr. Biden still believes it is appropriate for the $300 benefit to expire on schedule, as it was “always intended to be temporary,” the secretaries of the Treasury and labor said in a letter to Democratic committee chairmen in the House and Senate on Thursday. But they also reiterated that the stimulus bill allows states to use their relief funds to prolong other parts of the expanded benefits, like the additional weeks for the long-term unemployed, and they called on states to do so if their economies still need the help.

That group could include California, New York and Nevada, where unemployment rates remain well above the national average and governors have not moved to pare back benefits in response to concerns that they may be making it more difficult for businesses to hire.

“Even as the economy continues to recover and robust job growth continues, there are some states where it may make sense for unemployed workers to continue receiving additional assistance for a longer period of time, allowing residents of those states more time to find a job in areas where unemployment remains high,” Janet L. Yellen, the Treasury secretary, and Martin J. Walsh, the labor secretary, wrote. “The Delta variant may also pose short-term challenges to local economies and labor markets.”

The additional unemployment benefits have helped to boost consumer spending in the recovery from recession, even as the labor market remains millions of jobs short of its prepandemic levels. But business owners and Republican lawmakers have blamed the $300 supplement, in particular, for the difficulties that retailers, restaurants and other employers have faced in filling jobs this spring and summer.

Two dozen states, mostly led by Republicans, have moved to end at least some of the benefits before their expiration date.

In their letter to Congress, the administration officials said the Labor Department was announcing $47 million in new grants meant to help displaced workers connect with good jobs. They also reiterated Mr. Biden’s call for Congress to include a long-term fix for problems with the unemployment system in a large spending bill that Democrats are attempting to move as part of their multi-part economic agenda.