Leopold “Lee” Abraham 2nd, the former chairman of Associated Merchandising Corp., a once powerful retail sourcing and consulting organization serving stores around the world, died at his home in Lenox, Mass., due complications from cancer. He was 93.

The pipe-smoking, soft-spoken Abraham began his career in retail in 1954 as a floorwalker at Famous Barr, a division of the former May Department Stores Co. Abraham rose up the ranks of May Co. and by 1971 he was chairman and chief executive officer of the New York-based May Merchandising arm of May Co., which Macy’s Inc. acquired in 2005.

In 1972, Abraham opened a network of offices in Europe and the Far East for the May Co. His extensive international experience led to an invitation to be among the first Americans invited into China, when relations with the U.S. were renewed, for the 1973 Canton Trade Fair.

Five years later, Abraham was named chairman and CEO of AMC, which evolved into the world’s largest retail and sourcing organization for department and specialty stores. At the time Abraham joined the organization, AMC was importing about $140 million in merchandise from overseas, but by the time Abraham retired from AMC in 1992, there was over $1 billion in imports annually. During his career he met with American ambassadors when he was abroad and U.S. senators to lobby for the retail community.

“There were so many special things about my dad,” said his daughter Susan Spehar. “He taught us to tell the truth, to not blow our own horns, and to value each person equally. He remembered everyone’s name and showed a genuine interest in each person he encountered, whether they be a waiter at a restaurant he frequented, his doorman, friends of his grandchildren, everyone. He remembered people’s accomplishments as well as their families and he would always stop, shake their hand, and chat before going his way.

“But he was also a huge trickster, loving nothing better than to tease the gullible among us, of which I was one,” she said, noting that he made jokes literally until the day he died. “We were sitting at his breakfast table and I asked him if I could have a small piece of the Friday New York Times. His right hand was so swollen he couldn’t use it but with his left hand he tore a tiny scrap of paper off and handed it to me with a grin.”

When he was first diagnosed with pharyngeal cancer at age 89 and given treatment options, he told his daughter, “I don’t want my grandchildren to think I let them down, that I wasn’t willing to fight for my life” and he chose to do radiation, which was tough on him.

“Although he ended up with many health issues, he never complained,” said his daughter. “He never stopped being interested in the world, he never stopped loving to sit in the sun and comment on the beauty of the landscape in front of him.”

“He was a mentor to me. I loved the guy,” said Stan Tucker, the former Saks Fifth Avenue fashion director for men’s, kids and home who worked as a general merchandise manager at AMC for five years, reporting to Abraham. “He was genuinely interested in you as a person not just as an employee,” Tucker said. “He became a friend as well as my boss. I trusted him 100 percent. The fashion business can be very rough and nasty. He was not that kind of guy.”

Founded in 1916, AMC grew over the decades into an influential apparel sourcing, product-development, trend-spotting and consulting organization for such retailers as Federated Department Stores, Harrods, Marshall Field’s and Target. Retailers paid a fee to AMC based on volume. At one time, AMC operated about 50 offices in major cities around the world, including Paris, London and Hong Kong. The offices arranged meetings for buyers traveling overseas to visit manufacturers, designers and showrooms, some of which may have been new to the retailers. “It was like when you were traveling overseas, you had a home office to go to. AMC did all the research for you,” said Tucker.

AMC also developed private label merchandise for retailers and was able to procure huge volumes at excellent prices due to the buying power it had based on aggregating orders from different retailers. Another key function at AMC was advising stores on voids in their businesses and where the merchandise opportunities were. AMC operated a data exchange whereby member retailers had access to information on category performance at other AMC-member retailers.

For many decades AMC’s business model worked until around the late ’80s when retail consolidation was on the rise. As retailers merged, those remaining were big enough to operate on their own the services that AMC provided, such as private label design and development, and overseas offices. With growing fleets of stores, retailers began finding themselves in direct competition with other members of AMC. Exchanging data was no longer practical. A big blow to AMC was when Federated pulled out of it. In 1998, Target Corp., at the time called Dayton Hudson Corp. and a major user of AMC’s Asian operations, took over AMC, effectively ending AMC as it had historically operated.

Abraham served on the board of governors for Parson’s School of Design for 14 years and was given The Parsons Award for his 47 years of contributions to the fashion industry. After retirement, he served on several boards, such as Signet Group, Liz Claiborne, R.G. Barry Corporation, and Smith Barney. Abraham was married three times, including for about a decade to the late Dawn Mello, who held top positions at Gucci and Bergdorf Goodman.

In addition to his daughter, Abraham is survived by his brother, Lee 3rd; three grandchildren; one great grandchild, and his third wife Katherine. In lieu of flowers, donations can be sent to the Lee Abraham Scholarship Fund, Stonehill College, Easton, Mass.; the ACLU, or a charity of one’s choice. 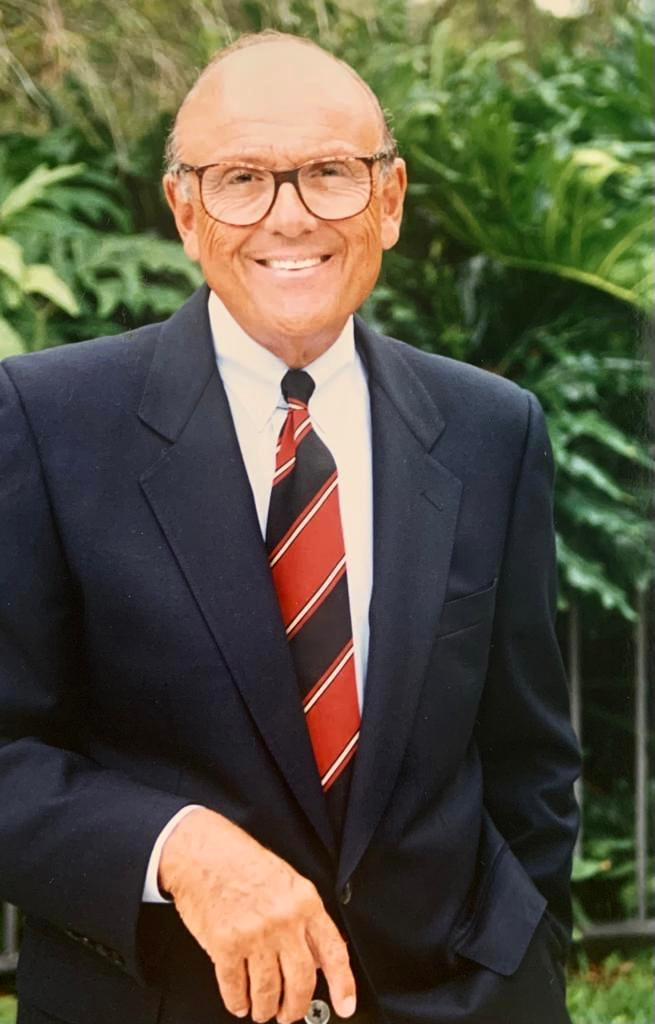