SINGAPORE – New private home sales fell nearly 24 per cent in August after hitting a six-month high in July, as developers pared back new launches and some buyers held off due to the Hungry Ghost month and Covid-19 phase two heightened alert restrictions.

But overall, new home sales remained relatively strong despite the month-on-month drop to 1,215 units last month from 1,591 units in July.

“Instead of slowing down during the typically quiet Hungry Ghost month, new private home sales have been robust during both August this year and last year,” he said.

Sales volumes that exceed 1,000 units a month should be seen as robust, given that developers sold less than 12,000 units annually in the past seven years, ERA Realty head of research and consultancy Nicholas Mak said.

“Over the past seven years, developers sold an average of 738 private housing units monthly, excluding EC units,” he noted.

Including executive condominiums (ECs), new home sales fell 24.3 per cent to 1,322 units last month from 1,746 units in July. Compared with a year ago, new home sales slipped 1 per cent, according to Urban Redevelopment Authority (URA) data released on Wednesday.

The bulk of the units launched for sale last month was from new launches, The Watergardens at Canberra (300 units) and Klimt Cairnhill (138 units), as well as existing projects – Fourth Avenue Residences and The Florence Residences. Together, these projects accounted for 77 per cent of the total units launched.

“Buyers were attracted to its competitive pricing, and close proximity to the Canberra MRT station and amenities like Sembawang Shopping Centre and Canberra Plaza,” said Mr Ong Teck Hui, senior director of research & consultancy at JLL.

This was followed by Normanton Park with 131 units sold at a median price of $1,828 psf. Other best-selling condos in the suburbs and city fringes included Midwood, OLA, Treasure at Tampines, Dairy Farm Residences, and Parc Clematis.

The suburbs, or outside central region (OCR), accounted for the majority of sales at 59 per cent, or 720 transactions, due to demand for suburban condominiums from HDB upgraders and new families, Mr Leonard Tay, head of research, Knight Frank Singapore, said. 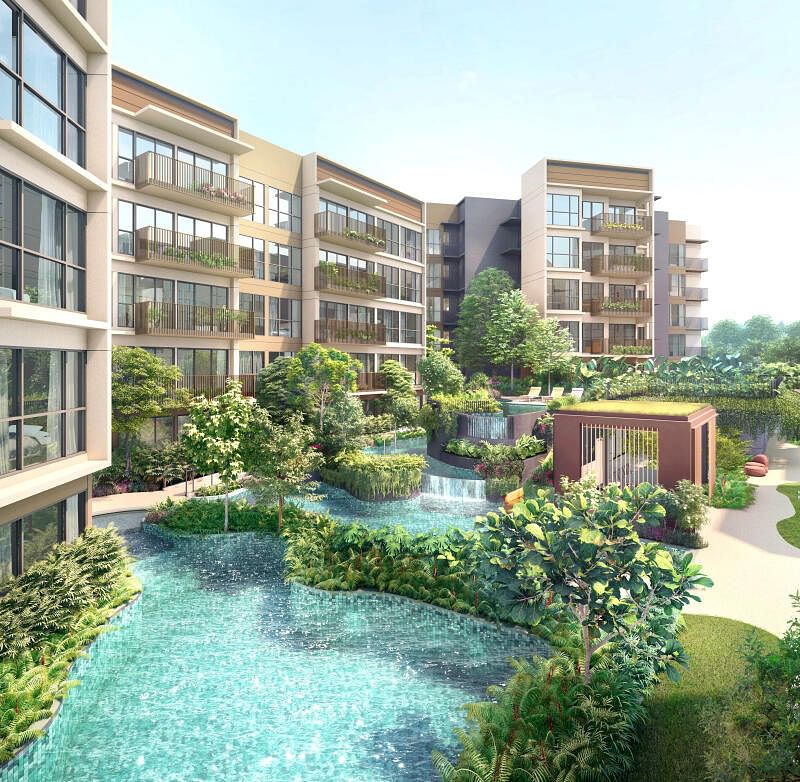 The highest per square foot price recorded in the suburbs went to a 66 square metre freehold non-landed new private home at The Lilium, which sold for $1.5 million or $2,139 psf.

In terms of price quantum, the most expensive mass-market home sold last month was a 201 sq m unit at Parc Clematis for $3.063 million, followed by a 159 sq m unit at the same project for $2.798 million, said OrangeTee & Tie’s senior vice-president of research and analytics Christine Sun.

City fringe projects made up 28.2 per cent of total sales last month. Around 75 per cent of the total developer sales in August were priced lower than $2,000 psf, based on caveats registered, Mr Wong said.

Developers are likely to step up new project launches after the seventh lunar month, analysts say. These include Bartley Vue and Jervois Mansion later this month.

More launches are lined up in the last quarter of 2021 – the 696-unit CanningHill Piers at River Valley Road, as well as Perfect Ten, Amber Sea, Belgravia Ace, Cairnhill 16, Mori and The Commodore, said Huttons Asia.