A disinformation effort to reduce public confidence in Covid-19 vaccines tried to enroll social media commentators in France and Germany. 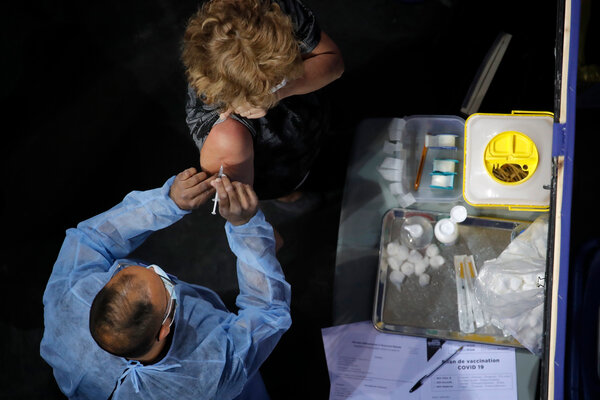 PARIS — The mysterious London public relations agency sent its pitch simultaneously to social media influencers in France and Germany: Claim that Pfizer’s Covid-19 vaccine is deadly and that regulators and the mainstream media are covering it up, the message read, and earn thousands of euros in easy money in exchange.

The claim is false. The purported agency, Fazze, has a website and describes itself as an “influencer marketing platform” connecting bloggers and advertisers. But when some of the influencers tried to find out who was running Fazze, the ephemeral trail appeared to lead to Russia.

“Unbelievable. The address of the London agency that contacted me is bogus,” Léo Grasset, a popular French health and science YouTuber with more than one million followers, wrote on Twitter Monday. “All the employees have weird LinkedIn profiles … which have been missing since this morning. Everyone has worked in Russia before.”

Mirko Drotschmann, a German health commentator with 1.5 million YouTube subscribers, said in a tweet that the P.R. agency had asked if he wanted to be part of an “information campaign” about Pfizer deaths in exchange for money. After doing some research, he concluded: “Agency headquarters: London. Residence of the CEO: Moscow.”

Their responses prompted two other social media influencers to come forward and say they, too, were approached last week with the offer of a “partnership” to criticize the Pfizer-BioNTech vaccine. One was offered 2,000 euros. It’s uncertain how many influencers received the solicitations, or if any acted on them.