The federal government has long owned more real estate than it knows what to do with — buildings that sit empty and sites that are underdeveloped — but it must jump through hoops before it can sell its holdings. So surplus properties languish while taxpayers foot the bill for maintenance.

The solution, springing from legislation passed in 2016, was an independent agency that would quickly identify underused properties and expedite their disposal.

But nothing has been simple about the Public Buildings Reform Board, as the little-known agency is called.

It took three years for the five existing board members to be sworn in, and two empty seats remain, including that of the chairman. The Government Accountability Office reported that the board did not adequately document how it went about selecting properties for sale. The board was sued when it sought to sell a Seattle building that is a repository of important tribal records. The General Services Administration, the agency that disposes of most federal properties, has flouted the board’s advice.

And so far, only a single property that the board has recommended for sale has actually been sold.

“It’s taken a lot more effort to get rid of this stuff than the reformers had hoped,” said Demian Brady, vice president for research at the National Taxpayers Union Foundation, a lobbying group.

The board’s tribulations are a reminder of how difficult it can be to untangle government red tape. Some of the issues can be chalked up to growing pains and the difficulties of operating during the pandemic, and board members contend that the agency has turned a corner.

But the rise of remote work means that federal agencies are likely to need less office space, resulting in a greater need for the government to reduce its footprint.

“This tool is going to be more, not less, important going forward,” said Daniel Mathews, head of federal sales at WeWork and the former staff director of the House subcommittee that drafted the legislation creating the board.

But whether the board will have its intended impact remains to be seen.

“It’s turned into an arm-wrestling contest,” said Norman Dong, a managing director at FD Stonewater, a real estate company. He supported the legislation as commissioner of the public buildings service in the General Services Administration. 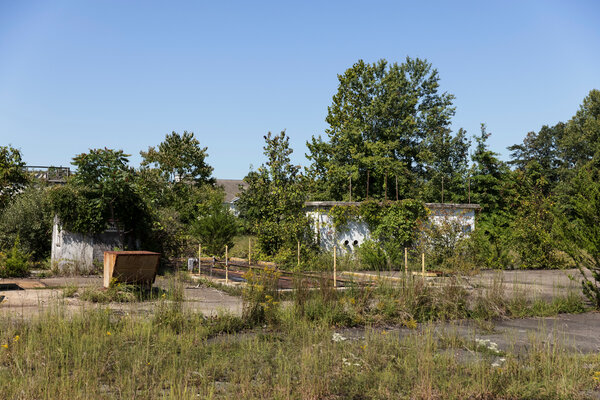 The problem of surplus federal property dates back decades, well before the Public Buildings Reform Board was created. By 2003, the Government Accountability Office had placed the management of federal real property on a “high risk” list, in part because of longstanding difficulties unloading unneeded property.

The General Services Administration functions as the federal landlord, managing the buildings the government owns. But it cannot sell a building unless the agency occupying it declares it “excess.” And agencies have had little incentive to do that.

It might cost an agency less to maintain a building on an annual basis than to relocate employees to a smaller space and prepare the old building for sale, even if it makes sense in the long run to get the property off its books. And agencies may not benefit financially from a sale because the proceeds often go directly to the Treasury Department.

If an agency does deem a building “excess,” there are additional hurdles: The property must first be offered to other agencies and, if there are no takers, made available for homeless services and other uses. The process can take years, leading to a backlog.

In the federal government’s 2015 fiscal year, agencies reported more than 7,000 excess or underutilized properties, according to the Government Accountability Office.

Attempts have been made, through Republican and Democratic administrations, to remedy the problem. A bipartisan breakthrough came in 2016 with the passage of the Federal Assets Sale and Transfer Act, known as FASTA, modeled on a successful process of whittling down Defense Department installations after the Cold War. FASTA, it was hoped, would do for civilian properties what the Base Realignment and Closure process had done for military sites.

Signed into law by President Barack Obama just before he left office, FASTA authorized the board to come up with three rounds of sales, beginning with a group of “high value asset” properties that would fetch $500 million to $750 million. The high-value round was also seen as a high-speed strategy because those properties could skirt the usual procedural hoops and go straight to sale, with the earnings funding the preparation of other properties for sale. Total projected earnings over the board’s six-year term: $7 billion.

But members weren’t sworn in until May 2019, leaving them scrambling to hire staff and identify high-value properties by a fall deadline.

A former Nike missile site in Gaithersburg, Md., a suburb of Washington, made the cut. So did 17 acres in Menlo Park, Calif., dotted with buildings the United States Geological Survey was vacating. Real estate is at a premium in both areas.

But the board stumbled with its selection of a Seattle building where the National Archives and Records Administration stores historical documents. Board members felt that the run-down building in the city’s bustling downtown was ripe for redevelopment, but protests by scholars and tribes concerned about losing access to the records led to a lawsuit by Washington’s attorney general and, ultimately, the withdrawal of the property.

The board also recommended the sale of the Chet Holifield Federal Building — a ziggurat-like office building on 92 acres in Laguna Niguel, a city in Orange County, Calif. — but historic preservation issues have held up the process.

The final list of FASTA properties was narrowed to 11. To expedite sales and maximize returns, the board recommended that the General Services Administration hire a brokerage firm to sell the remaining properties together. The board believed that a portfolio sale would attract “the largest and best potential buyers,” said D. Talmage Hocker, a board member who is founder and chief executive of a real estate company in Louisville, Ky.

“We’re supposed to be making money,” said Angela Styles, a board member and former Office of Management and Budget official.

But after hiring a brokerage firm, the administration reversed course, deciding to sell the properties itself, one by one, on its auction website — the same place where it unloads used forklifts, office furniture, railroad spikes and combat boots.

Last year, the General Services Administration sold 59 properties on the auction website for a total of $52.59 million, but this is a fraction of what was envisioned for the FASTA properties.

“G.S.A. determined that offering properties based on an individual asset sale, rather than in a bundled portfolio sale, was the best course of action,” said Christina Wilkes, an agency spokeswoman.

But so far, only eight of the FASTA properties have been put up for auction; of these, a parking lot in Idaho Falls, Idaho, has been sold for $268,000.

“The proof is in the pudding,” said David L. Winstead, a board member and a former General Services Administration official. “It’s taken longer to get these sales done, and we’re anxious to get them done and funds into the public assets fund.”

While proceeds dribble in, the board is assembling its next list of properties, due in December, with some changes in the way it does business. In response to the criticisms by the Government Accountability Office, the board has beefed up documentation. After the debacle with the Seattle property, members are doing more outreach to public officials in whose districts potential sites are sitting.

Despite their early struggles, board members remain upbeat about their mission, which includes making recommendations about consolidating agency operations — potentially freeing up more buildings for sale — and about making their voice heard.