As Democrats and Republicans spent months last fall arguing over how to rescue the economy, one provision drew widespread support from lawmakers: reviving the Paycheck Protection Program, the government’s marquee effort to help small businesses weather the pandemic.

The Senate Republican leader, Mitch McConnell of Kentucky, called the lending program “a bipartisan slam dunk.” House Democrats included an extension and expansion of the program in aid packages in the summer and the fall. And Treasury economists said in December that the program might have saved nearly 19 million jobs.

Yet there is dissent from one notable contingent: Academic economists who have studied the program have concluded that it has saved relatively few jobs and that, at a cost of more than half a trillion dollars, it has been far less efficient than other government efforts to help the economy.

“A very large chunk of the benefit went to a very small share of the firms, and those were probably the firms least in need,” said David Autor, an M.I.T. economist who led one study.

The divergence in views over the program’s economic payoff stems in part from ambiguity about its goals: saving jobs or saving businesses.

Given the program’s cost, saving jobs on that scale doesn’t necessarily qualify as a success. Unemployment benefits also provide income, at far less expense, and programs like food assistance and aid to state and local governments pack a larger economic punch, according to many assessments.

And because the paycheck program was designed to reach as many businesses as possible, much of the money went to companies that were at little risk of laying off workers, or that would have brought them back quickly even without the help.

“It’s just a really inefficient use of funds,” said Eric Zwick, an economist at the University of Chicago’s business school who has studied the program.

Many policy experts on Wall Street and in Washington — as well as businesses and banks on Main Streets across the country — say the program’s merits should be assessed instead on what it did to save businesses. On that basis, they say, it helped prevent a greater calamity and fostered economic healing.

“A major goal was to keep these businesses alive so that when the economy started to recover and then the economy reopened, there would be businesses around to hire unemployed workers,” said Michael R. Strain, an economist at the American Enterprise Institute, a conservative think tank. Preliminary evidence suggests that the program has succeeded by that metric, he said.

In the short term, the program’s proponents are winning the argument. When Congress approved a $900 billion relief package in December, most of the $325 billion in small-business assistance was for a slightly modified version of the Paycheck Protection Program. Businesses began applying for the aid last month.

But the debate over the program’s merits could shape the next round of aid. President Biden’s $1.9 trillion pandemic relief plan includes billions for small businesses, but no new money for the program. His aides are weighing what to do about funds already allocated.

Mr. Biden’s proposal includes direct grants for the hardest-hit small businesses and a request for Congress to find new ways to help restaurants struggling with consumer pullbacks and state and local restrictions.

Many Democrats on Capitol Hill, along with some advocates for small-business relief in think tanks and lobbying shops around Washington, say lawmakers should move on to a more focused and efficient method for supporting small businesses until widespread vaccination fully reopens the economy.

Congress created the Paycheck Protection Program in March as businesses shut down early in the pandemic. The program sought to stem layoffs by providing forgivable, low-interest loans to help pay employees even if they weren’t working.

The effort, administered by banks, got off to a slow start. But over time, loans began to reach more businesses, in part because of changes that broadened access and loosened restrictions on spending the money.

One beneficiary was Schuchart, a Seattle-based general contractor with more than 100 employees. On April 7, after more than two weeks with little revenue — and after initially failing to get a P.P.P. loan through Wells Fargo, its longtime bank — executives moved to begin furloughs the next day. 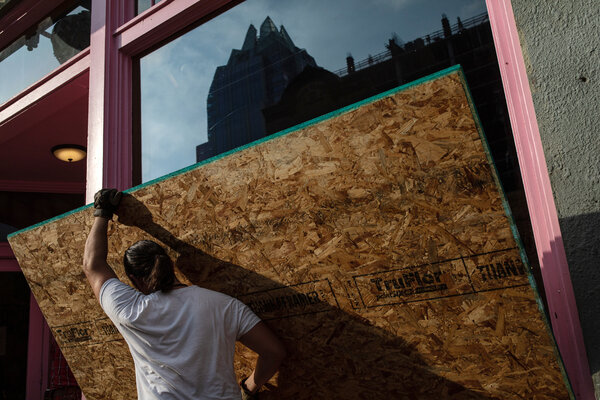 “We were discussing, what’s our next plan?” said Christian Geismann, the company’s chief financial officer. “And our next plan was not a good one. It was the ‘hitting the red button’ kind of plan for our people.”

Instead, Mr. Geismann got a call from Washington Trust Bank, a much smaller institution that he had contacted a day earlier. Schuchart had been approved for a loan of nearly $2.7 million. Instead of announcing layoffs, the company told its employees their jobs were safe.

“I felt like I was floating, because there was so much bad news that had happened over the past month,” Mr. Geismann said. “Here was something, finally, we could all celebrate.”

Anecdotes like Mr. Geismann’s, however, aren’t straightforward to interpret. Perhaps Schuchart and companies like it would have found another way to make ends meet, or would have rehired workers quickly once construction projects resumed.

Economists have tried to answer that question using data. Mr. Autor compared companies with just under 500 employees — which could qualify for the program’s original version — with those just above that size, which could not. If the loans were a big help, then the smaller companies should have retained many more of their workers. Instead, Mr. Autor found little difference between the two groups.

But some economists argue that such research understates the program’s impact because it fails to focus on the smallest businesses, which were less likely to have large cash reserves or other financing.

One paper, based on a survey of businesses in Oakland, Calif., found that those receiving P.P.P. loans were 20.5 percent more likely to say they expected to survive six months — but that the relatively greater optimism was limited to businesses with fewer than five employees.

Robert Bartlett, one of the Oakland study’s authors, said economists like Mr. Autor might be right that P.P.P. saved fewer jobs than hoped. “But for these small businesses, I think it helped them keep their doors open,” he said. “I’m convinced of that.” Many of those businesses, he noted, are in poor neighborhoods or are owned by racial or ethnic minorities.

Daniel G. Guerra Jr. founded AltusLearn, which provides training and compliance courses to medical workers, in 2013. By last year the company, based in Madison, Wis., had six employees and was on track for a year of significant growth.

Instead, when the pandemic began, medical centers halted virtually all nonurgent care and canceled training.

When revenue dried up, AltusLearn had few options. The company had less than a month’s worth of cash, and unlike larger companies, it had few expenses it could cut. Even layoffs wouldn’t have saved it.

“Had we not gotten P.P.P. in April, we would have been out of business,” Mr. Guerra said.

Tiny businesses like his — those employing fewer than 10 people — account for only 10 percent of U.S. jobs, according to data from the Census Bureau. But they account for 77 percent of all businesses. Glenn Hubbard, a Columbia University economist who was a top adviser to President George W. Bush, said it would be a mistake to let those businesses fail, even if their employment impact is small.

“You can’t look at cost per job saved,” he said. “It wasn’t the goal. The goal was preserving businesses.”

Indeed, despite its name, the Paycheck Protection Program evolved to put less emphasis on saving jobs and more on preventing business failures. Initially, borrowers had to put at least 75 percent of their P.P.P. money toward salaries to have their loans fully forgiven. But Congress later relaxed that requirement, to 60 percent, and gave companies more time to spend the money.

In reviving the program in December, Congress aimed at the companies that would benefit most. Only businesses with fewer than 300 employees can apply for a second round of aid — the ceiling remains 500 employees for companies seeking initial loans — and money was set aside for very small businesses and those in low- and moderate-income neighborhoods.

But the program is still open to businesses that have suffered in the pandemic but aren’t necessarily at risk of layoffs or bankruptcy.

Schuchart, the Seattle contractor, is one of them. Business has bounced back since last spring, but it remains below normal. The company avoided layoffs in 2020, and doesn’t expect job cuts this year. But it has applied for a second P.P.P. loan, which Mr. Geismann said would allow it to invest in the business.

“It’s essentially like an insurance policy for businesses to continue to try to invest and not feel like you’re taking on additional risk despite this economy,” he said. As a result, he said, he expects the company to come out of the recession much stronger.