Is it any coincidence that the youngest of the top-four handbag brands on resale site The RealReal — Louis Vuitton, Hermès, Chanel and Gucci — is 100 years old?

“We primarily see heritage drive demand in our core, high-value categories including luxury handbags, fine jewelry and watches,” said Sasha Shoka, head of women’s at The RealReal. “Resale value for these marquee handbags is up 30 percent year-over-year.”

Spurred on partly by the pandemic, many European brands have been leaning into heritage in a variety of ways, with Balmain’s Olivier Rousteing resurrecting archival monograms and launching a podcast series about the house, founded in 1945, and Carine Roitfeld, style adviser at the Karl Lagerfeld brand, creating a Karl x Karl capsule for fall 2021 inspired directly by the late founder’s personal mode of dress.

Other examples abound, with Kim Jones drawing inspiration from Fendi’s first products from almost a century ago — luggage — whose parchment and leather colors inspired the palette for his ready-to-wear debut last February, and Hedi Slimane heating up Celine by putting its monogram, historical codes and French spirit at the heart of the project.

The value and rarity of heritage brands is also reflected in the blockbuster acquisitions of Tiffany & Co., founded in 1837, and Birkenstock, a maker of contour-soled footwear since 1774, he noted.

The last time so many brands moved heritage to the forefront of product and communication efforts was during the Great Recession.

“Heritage brands uphold a level of respect and long-standing loyalty that sets them apart in today’s saturated market,” added Adrien Cheng, the Hong Kong-based developer and entrepreneur known for his K11 Group, and a new webinar series with Roitfeld exalting rare craft skills. “In recent years especially, Asian consumers have increasingly turned to heritage as a source of style inspiration.”

To wit: Last year Cheng organized a cheongsam heritage exhibition at his K11 Musea which showcased the evolution of the century-old Chinese dress style. It incorporated a workshop by local cheongsam tailor Yin Kou Zhang, famous designs by Master Yan Ka-Man and cheongsams worn by celebrities in the 1960s — and the display was a hit, attracting guests of all ages, according to Cheng. 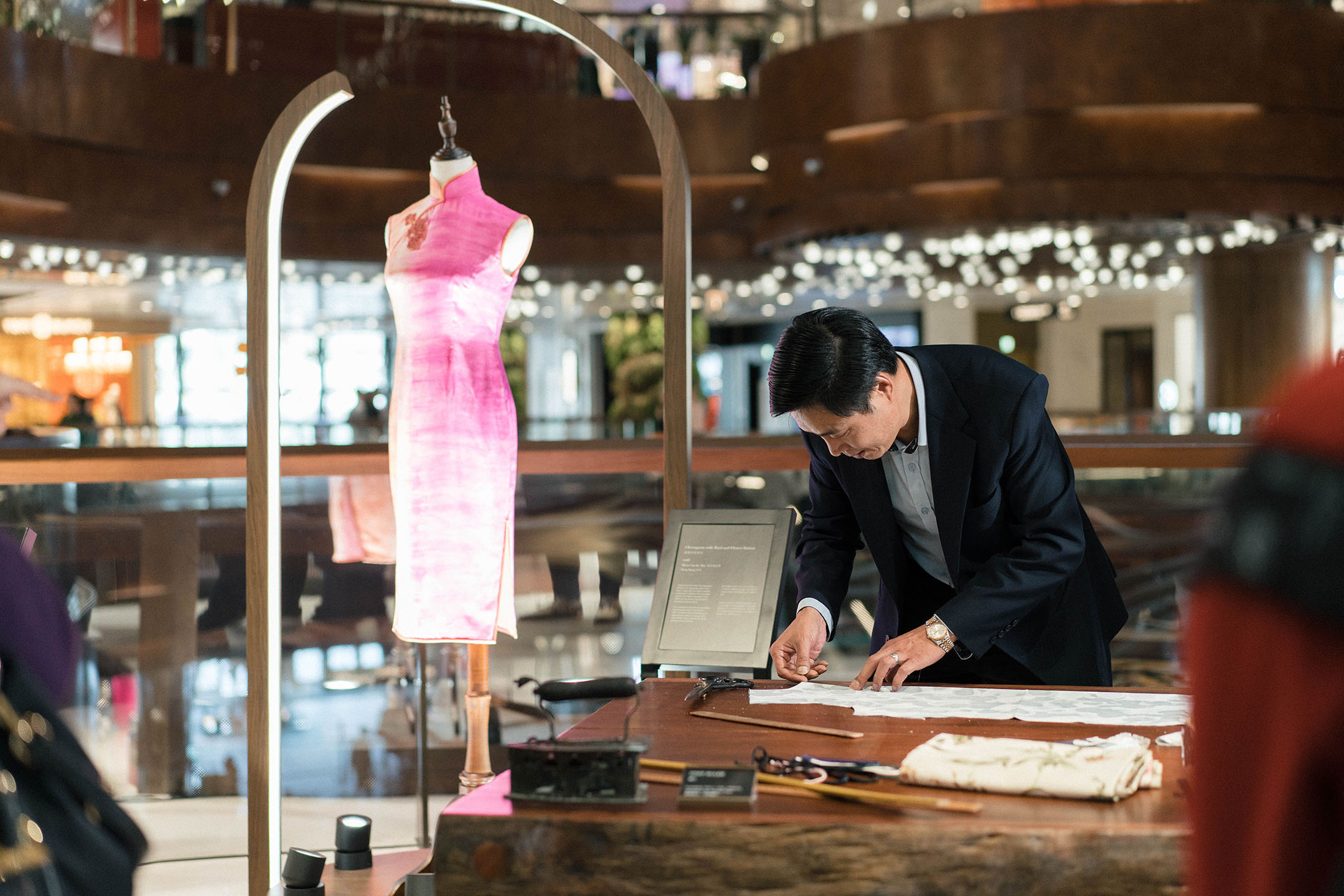 “In the age of mass production and fast fashion, there is still a great appreciation for things that take time and diligence to create,” he said in an interview. “Aside from age and technique, heritage brands must master the delicate balancing act of meeting the demand for innovation while upholding tradition. Certain houses, such as Dior, have navigated this in remarkable ways.”

Cowen’s Chen agreed. “It’s about translation and staying fresh and surprising and delighting with context. You have this interplay between heritage yet cultural relevance, so just because something has a heritage doesn’t necessarily give it context for being appealing,” he explained, noting that Louis Vuitton “really does a good job blending the past and the future.”

LVMH Moët Hennessy Louis Vuitton remains a top stock pick at Cowen and Chen highlighted the group’s strong collection of heritage brands, from Rimowa, founded in 1898, and Berluti, dating from 1895, to the Belmond hospitality business, which includes the Venice Simplon-Orient-Express train.

Consumers see the value also, and have driven up resale prices to new heights.

The average resale price for Hermès’ Birkin handbags on The RealReal is now more than $4,000. Vuitton is also spiking, with Shoka noting bags in Vuitton’s brown monogram canvas now command an average of 75 percent of the original retail price. Prices for Chanel’s classic “flap bags” are up $1,000 year-over-year, she said, and items from Cartier’s Love Collection, launched in 1979, sold for 78 percent of its original retail price on average last year.

Given the lusty demand for vintage handbags and baubles, brands are reissuing heritage prints and styles, with Gucci’s Jackie 1961 bag an excellent example, according to Shoka. Reintroduced with the fall 2020 collection, the Jackie 1961 bag has seen its average resale price leap 35 percent year-over-year. 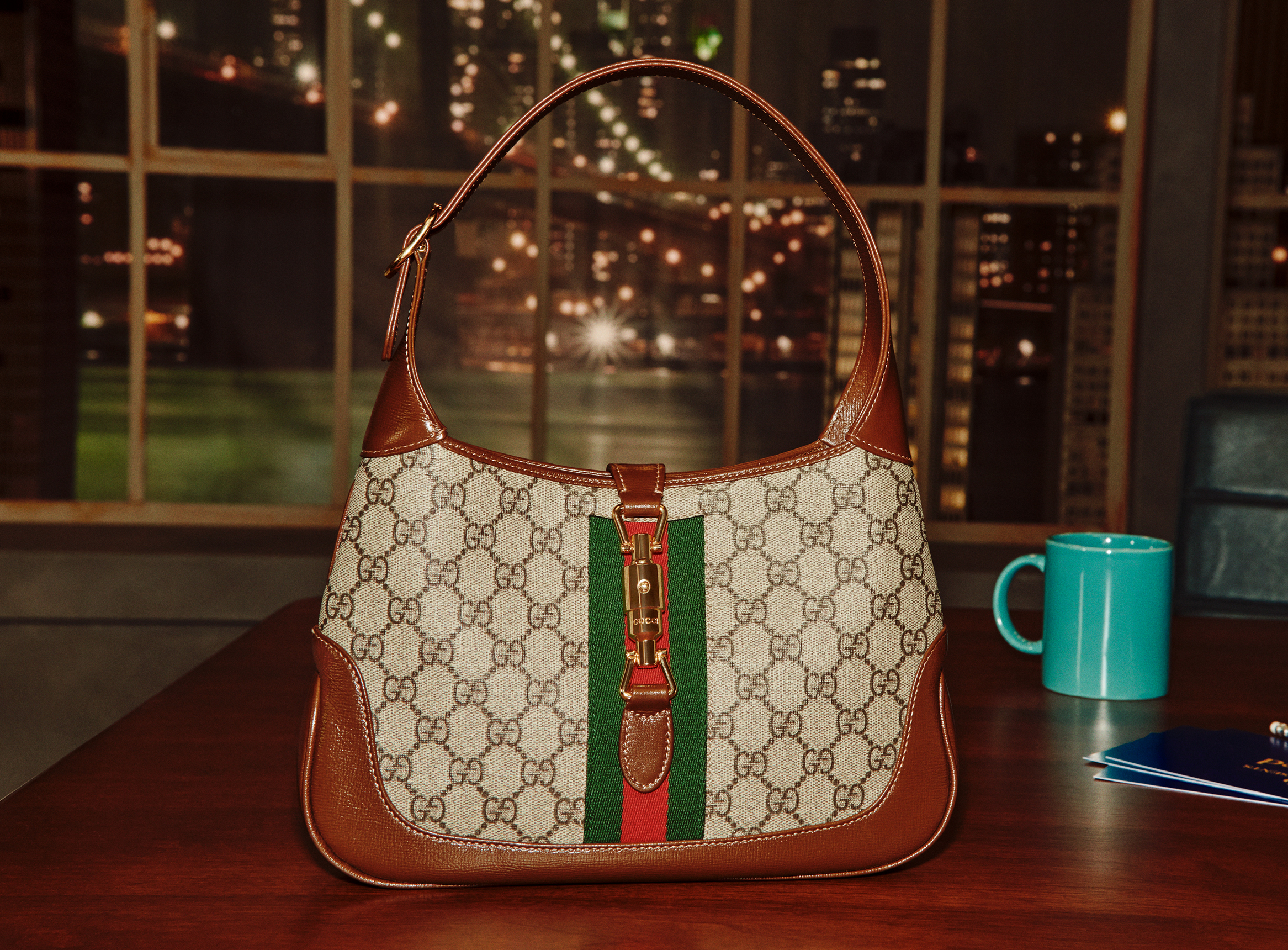 “Gucci has recognized the growing appetite among younger consumers for vintage,” Shoka said, also singling out the brand’s re-release of its Horsebit 1955 bag as “another great example of how they’re honoring heritage styles and craftsmanship.”

“Heritage and archives became a marketing tool,” said Marco Pecorari, the director of fashion studies at Parsons Paris. “Heritage and the use of archives helped to create another discourse on exclusivity.”

The academic noted that the majority of heritage departments at big fashion houses are commanded by the communication and marketing teams, not the design studios, though designers “are less and less afraid to speak about the past.”

Dior and Chanel have been among the “leading forces” in mining brand heritage, often adopting museum strategies and techniques in terms of conservation and exhibitions, Pecorari said, predicting more brands will open permanent fashion museums in the future. 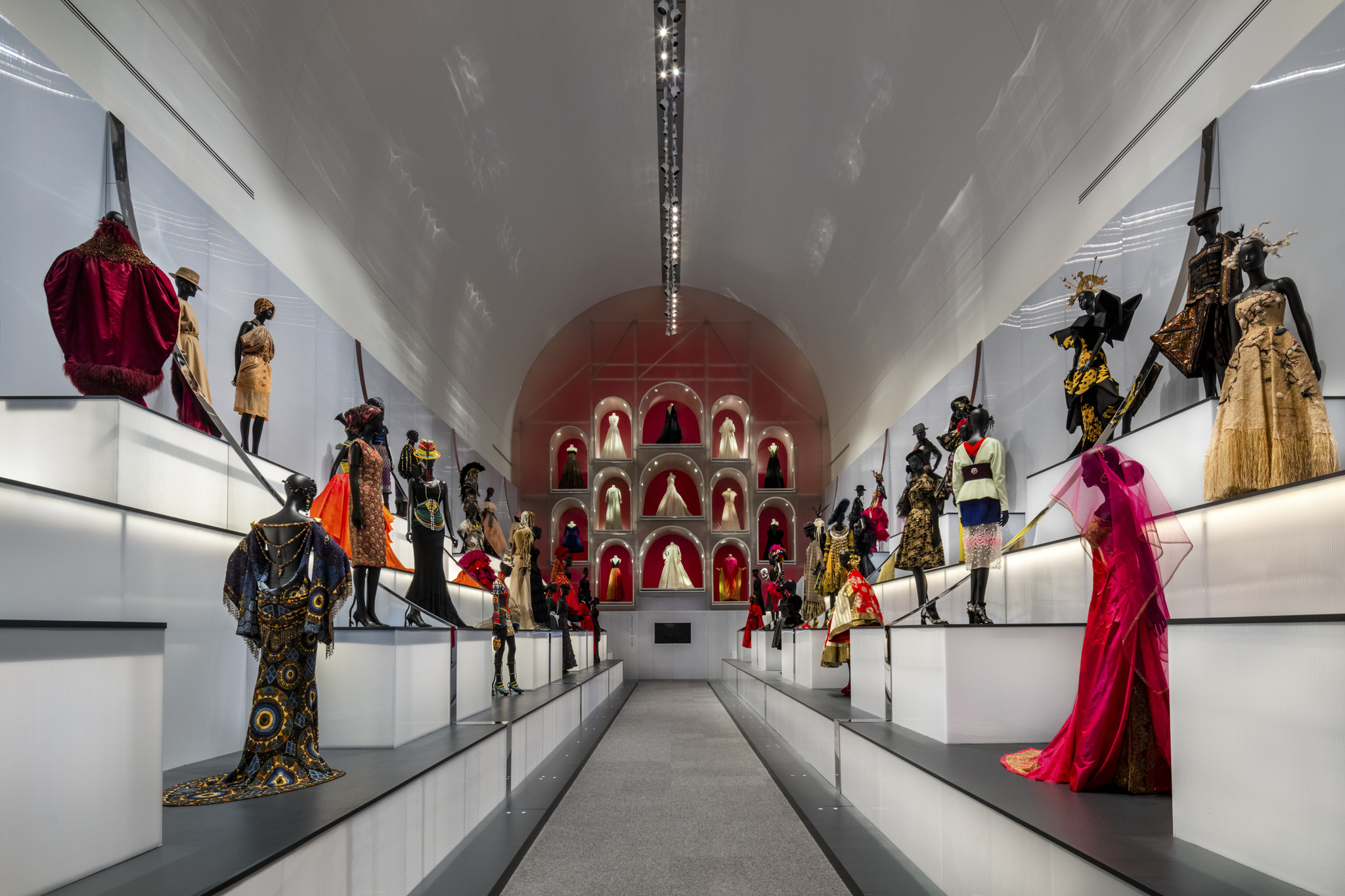 Inside “Dior: From Paris to the World” at Dallas Museum of Art. Courtesy Image

According to sources, Dior’s revamped Avenue Montaigne flagship in Paris, currently undergoing renovation, will incorporate a museum. The house declined to comment, but noted: “Dior Héritage is an essential department for our creative/artistic directors, who draw inspiration from the inexhaustible wealth of the archives, in order to reinvent them. A motif, an accessory, a fabric, a detail…anything can serve as the starting point for a new story or revisited savoir faire.”

Rousteing said pandemic-related lockdowns prompted him to revisit the history and archives of Pierre Balmain, and it energized him as a designer and set him off on a new course. He was struck, for example, by the founding couturier’s close friendship with American writer Gertrude Stein, which helped push him to be a lot more international.

“I’m really seen as a pop designer, a witness of my time, because of my youth and how I started at Balmain,” said Rousteing, who became creative director in 2011 at the age of 25 and a social media star, amassing 6.4 million followers on his personal Instagram account. “My audience is also really young so I want to use my platforms to share the incredible heritage of the house. It needs to be discovered and expressed to a younger generation.”

Rousteing said it’s a misconception that young generations don’t care about the past and are only interested in T-shirts and sneakers. In his view, it’s authenticity they seek.

“I think more and more, young generations are looking for a really strong message, really strong values — and buying something that has a strong heritage reassures them that the product that they will have in their hands is quality, and it has a story behind it,” he said in an interview.

While Rousteing has promoted Balmain’s resurrected Labyrinth logo on his Instagram feed, he’s also midway through a 10-part series of podcasts on Spotify, which sit alongside music playlists, that delve into Balmain’s history. “It’s really inspiring because I love to talk about the story of the house, but the same time my own story,” he said. “Podcasts are really interesting because I can express my vision of Balmain today, but also to explain why I love Balmain from the past.” 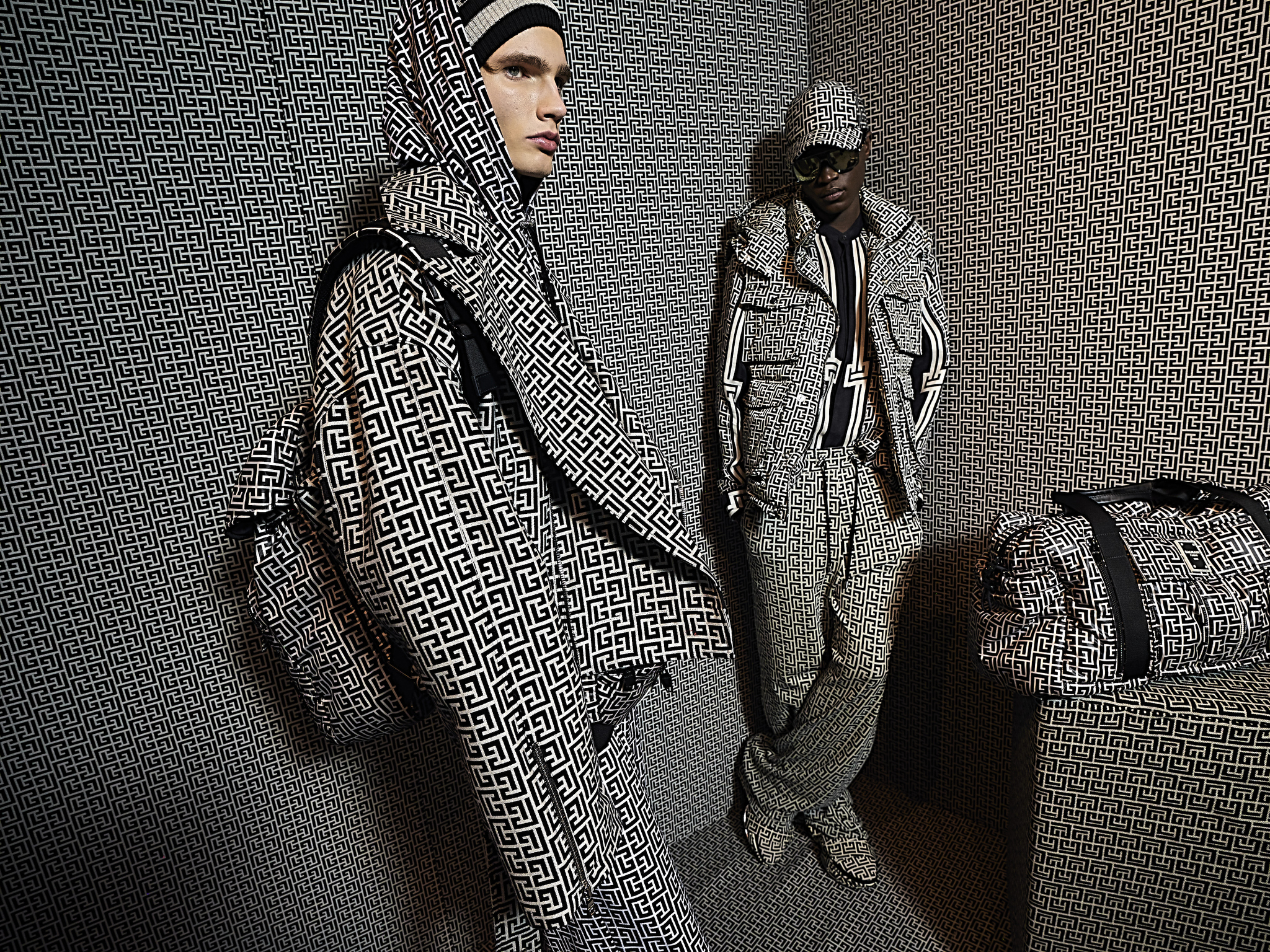 Rousteing’s home and office are scented with Cire Trudon candles, which date back to 1643, and his esteem for the legacy firm prompted a Balmain collaboration last September. The designer also recently became an ambassador for Porsche. “It has such a strong legacy, but it’s so relevant today,” he said of the German carmaker, established in 1931.

Exalting rare savoir faire is a recent emphasis for many heritage brands. For his first design effort at Moynat, Louis Vuitton accessories wiz Nicholas Knightly homed in on the locks, hardware and finishing techniques on trunks to inform his first handbag designs.

LVMH, owner of Moynat, has been a key ringleader in lifting the veil on artisans with its biannual Journées Particulières open-doors event. Initiated in 2011, it gives members of the public worldwide a rare opportunity to meet the craftspeople who make everything from Tag Heuer watches and Guerlain fragrances to Berluti shoes. The last edition was held in 2018.

“The idea of showing people working is quite new in the fashion industry,” Pecorari noted.

Yet that’s what Roitfeld and Cheng do with their webinar series, with one episode showing how small metal balls are heated and pressed into fabric to shape each petal of Chanel’s famous camellias.

“I see the renewal of craftsmanship and culture-inspired designs on and off the runway as more and more young designers render their very own take on artisanal craftsmanship, especially on sustainability,” Roitfeld said. “In fact, I believe artisanal is defining fashion in a modern era.”

“Let the world witness the hours of artisanship dedicated to your designs to ensure their preciousness is recognized,” Cheng advised. “Whether that be through a film, social media, or allowing visits to your factory following the pandemic, there are several creative and innovative ways to engage the powerful next generation through modern storytelling.”

Observers agreed that consumer expectations are changing, and heritage alone is not enough — or the only compelling narrative.

“We also have the new generation of customers that are receptive more than ever before to new brands and value transparency,” noted Cowen’s Chen. “When I think of luxury, I also think about the luxury of time, the luxury of health and amidst the pandemic. There’s profound societal changes in prioritization where human connection in health and wellness and your psychological well-being are also important.”

K11’s Cheng noted that several legacy names have made “great strides in the sustainability space” and added biotechnology and upcycling to age-old techniques.

Examples include Gucci’s sustainable Off the Grid collection, Hermès’ Victoria travel bag made of a mushroom-leather developed with MycoWorks, and Loewe’s The Surplus Project, dedicated to low-impact luxury items by reusing excess leathers from past collections.

“These diverse initiatives all uniquely prove that forward thinking does not have to come at the expense of tradition,” Cheng enthused. “From both a standpoint of sustainability and creativity, the slow-fashion approach to production that is often honored by heritage brands carries great value and prestige in the current market. The pandemic has furthered society’s appreciation for quality over quantity and that will work to the advantage of heritage brands for years to come.”

Fashion Brands Focus on Their Heritage