For years, Symone — the drag queen persona created by Reggie Gavin — has been collecting folders of memorable looks, with hundreds of references to Black women. There are photographs from Vogue and Harper’s Bazaar of Lil’ Kim, Whitney Houston, Grace Jones, Diana Ross, Tina Turner and Rihanna.

She started storing the images on the camera roll on her phone, taking note of the clothing, shoes and makeup — not to recreate the looks, but rather to honor her idols through homage in drag.

“We, as queer people, that’s kind of our thing,” Symone, 26, said from her home in Los Angeles, surrounded by posters of women she looks up to. “We look up to our heroes. They give us strength.”

“If you sprinkle all those women together and put a dash of my mother you get Symone,” she said.

By the time she made it to the final round of contestants to participate in the 13th season of “RuPaul’s Drag Race,” a reality-show where drag stars create looks and compete in challenges, she had been carefully crafting this aesthetic for years. (On the first episode of the season, she walked into the show’s workroom wearing a mini dress made of Polaroids of herself. “I wanted everyone to know who I was,” she said.)

It turned out to be a crucial part of a winning formula. Fifteen episodes later, Symone had defeated 12 other drag performers and was named America’s Next Drag Superstar. 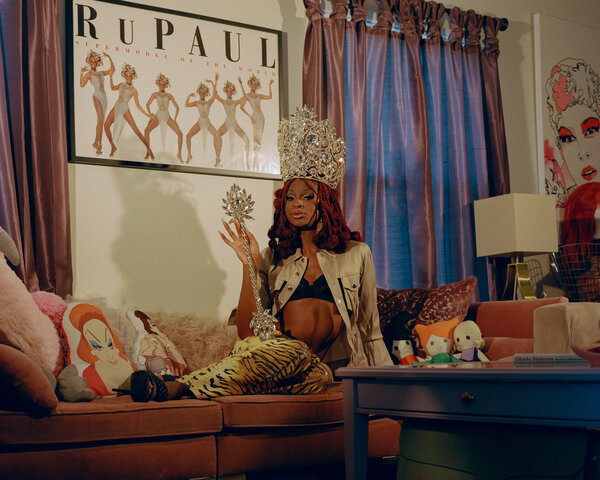 Symone grew up in Conway, Ark., a small city that she described as “quiet and Southern.” She remembers being a “very, very shy kid” and felt different, she said: “I always kind of felt like I didn’t really belong.”

Symone’s mother, Regina Price, 54, worked with children with disabilities, and her father, Eddie Gavin, 53, was a factory worker at Virco Manufacturing Corporation. Ms. Price remembers her child as quiet but very focused and dedicated. Symone’s favorite subjects were Algebra and band, she said. “Random, right? I know, but that completely sums up the way my brain works.”

At around age eight, Symone joined the church choir. During a Sunday service, the choir performed a song which, at first, she was hesitant to sing, but eventually she stood in front of the pews. Ms. Price remembered that moment, “the whole church was on their feet. Everybody was talking about this little kid.” Symone never really thought she had the best singing voice, but from that moment on, she knew she could entertain.

At 16, Symone got her first job cleaning tables and washing dishes at a local cafe called Something Brewing and started buying makeup with her earnings. “I would come home after school and I had like a two hour window before my parents got home and I would practice my makeup,” she said. When she heard the garage door open, she would quickly take it all off.

That changed her senior year. For prom, Symone bought a blonde shake-and-go wig and a long fuchsia dress on the sale rack at a vintage clothing store called Viki’s at the Village for $69. “The owner, Vicky Hawk, was one of the only people to let me actually try on a dress and treat me with respect and kindness,” Symone said. “Her doing that literally changed my life.”

Before prom, Symone said she went to the local Olive Garden in the dress and people stared. “It made some people very uncomfortable,” Symone said. “Some people got up and left but I stood my ground, sat there and ate in drag.”

After high school Symone went to University of Arkansas at Little Rock to study communications. At 18, she had her first performance at Triniti Nightclub under the name Delilah Alamaine. She eventually changed her stage name to Symone, after a character in a play she wrote in high school, and started to build a following performing at drag clubs where she hosted a show called Symone Says.

It was at Triniti Nightclub that her mother saw her perform in drag to the Mary J. Blige song “Just Fine,” and couldn’t believe she was watching her once shy child. “She killed it,” said Ms. Price. “My mouth was open, I was like, ‘Are you kidding right now?’”

In 2019 Symone moved to Los Angeles and joined the House of Avalon, a queer fashion and pop culture collective, that includes as members the designers Marko Monroe, Hunter Crenshaw and Grant Vanderbilt. They all lived together and threw parties, as well as provide creative direction for ad campaigns.

It was there she met Gigi Goode, a drag performer and member of the House of Avalon, who had been on “RuPaul’s Drag Race” in 2020. Symone always knew she wanted to be on “Rupaul’s Drag Race,” and Gigi Goode helped her understand how things worked. Symone had watched the show growing up but “there really weren’t that many Black queer people growing up — outside of RuPaul — and so I kind of wanted to be that for someone else,” she said.

That desire informed many of Symone’s looks on the show. As part of the one of the challenges, contestants were asked to create a look with a train. At first, Symone was going to interpret the challenge to create a train with billowy sleeves, but then she thought, “What if it was a durag?” Symone remembered the men in her family wearing durags, sitting on her grandmother’s porch.

She worked with Marko Monroe to create a look inspired by singer Rihanna’s spring 2017 Fenty x Puma collection, with a durag that had a long mint and blush-colored train. It remains her favorite look from the runway challenges.

In another challenge, contestants were prompted to incorporate a fascinator into their look. Symone walked the runway in a white sculptural column gown, designed by Howie B, with a white custom fascinator, designed by Mr. Monroe. On the back of the gown there were two red-Swarovski-crystal bullet wounds, with the words “Say Their Names” emblazoned in ruby-rhinestone blood.

RuPaul Charles, the host and creator of “RuPaul’s Drag Race,” said of Symone: “She is a master class in creative expression. Like no other, she uses the art of drag to entertain, enlighten and celebrate her rich Black heritage.”

Neon Calypso, 28, a drag artist in Brooklyn, hosted a weekly “Rupaul’s Drag Race” viewing party outdoors at a bar called Parklife while the season ran. From the beginning, she said she thought that Symone was a top contender for the crowd. She remembers the cheers and screams of over 100 people when Symone was announced the winner. “It was a really glorious moment,” Neon Calypso said, “and I’m happy that in the year that we had and at this crucial time, that moment happened.”

“Often, as performers of color, we have to hide those things that we experience in order to get where we want to get,” Neon Calypso added. But Symone stayed true to who she is. “When you get on those shows, you have to be able to represent yourself as whole and I think that Symone did that from the beginning.”

Mikelle Street, a writer, editor and former digital director at Out Magazine who has written about Symone’s performance on the show, echoed that. “To see things that you know are part of your culture now being looked at and prized as something that’s worthy of providing inspiration or worthy of being looked at in this artistic or historical context, I think can be extremely validating,” he said.

By phone, from Los Angeles, Symone recently recounted a pivotal moment for her — when she received a direct message on Instagram from one of her idols, Rihanna. It read: “You soooo EVERYTHING!!!! … I live for every second of it! You’re a true joy to watch!” Symone thanked her and expressed how much these words meant. Rihanna responded: “Please … no brakes, all gas!!”

A text from her icon is validating, but Symone has only begun her journey. “I really want to stretch this box that is drag,” she said. “I want to rule the world. I say that humbly.”