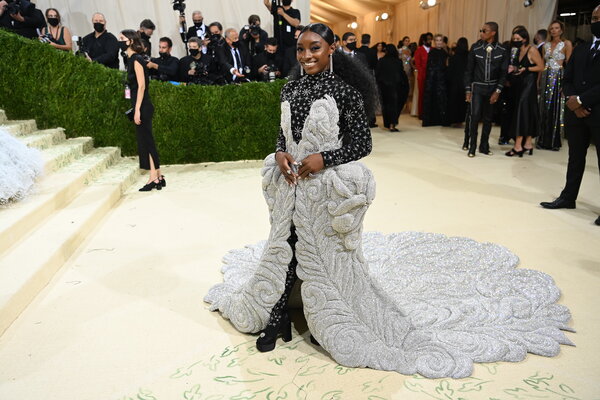 It may be useful, when trying to comprehend the work that went into the gymnast Simone Biles’s Met Gala dress — a showgirl-inspired satin gown with crystal embroidery that mimics feathers — to know the numbers.

The gown was made by Area, a New York label designed by Beckett Fogg and Piotrek Panszczyk, who said the embellishment took about 6,650 hours and 100 workers, including beaders, quality checkers and packers.

It used more than 17,000 feet of Swarovski glass crystal chains and nearly 200 feet of tulle. The dress weighs 98 pounds, the designers said, which is close to the weight of the woman wearing it; fortunately, Ms. Biles has superhuman strength. (Although the skirt is detachable, worn over a knitted night-sky bodysuit, and Ms. Biles is expected to shed it before she sits down for dinner inside the museum.)

Area, an independent label, has remained relatively small since it was founded in 2014, despite earning significant industry recognitions, like being named a finalist for the 2016 CFDA/Vogue Fashion Fund and a semifinalist for the LVMH Prize in 2020. The designers said they had not expected that they would ever dress one of the world’s most famous athletes — a pairing proposed by Vogue — on fashion’s biggest stage.

“It wasn’t even on our radar that we would be invited, to be honest,” Ms. Fogg said. The invitation came personally via email from Tom Ford, the CFDA chairman.

Mr. Panszczyk said Ms. Biles’s gown was inspired by the concept of performance — particularly the designers’ desire to reveal the work that goes into performances like Ms. Biles’s gymnastics routines, which require intense control and power in order to appear so seamless and graceful.

“People are all about entertainment, but they don’t really understand the craftsmanship that actually goes into something before it’s even entertainment,” Mr. Panszczyk said. Not unlike a gown that comes across as pretty and shiny in an online slide show but took thousands of hours of meticulous handcrafted work.

Still, Area didn’t want to lean too far into athleticism; simply nodding to it was enough. Ms. Biles, who is sponsored by Athleta, has worn plenty of sparkling unitards and not enough sparkling evening gowns. The designers also looked for inspiration in archival images of Josephine Baker, the Black entertainer and activist.

“Especially with Simone, I think it’s beautiful to create something so strong from something so delicate and beautiful,” Ms. Fogg said.