Superheroes tend to be thought of as monolithic icons by much of the public, but comic book fans know they have evolved over the decades.

Powers develop, supporting casts change, and origins get refreshed. Costumes, too, have evolved, to keep up with changing social norms (or at least the whims of comic book writers and artists and the occasional film or television stylist).

And let’s give credit where credit is due. Superman was wearing underwear as outerwear some 50 years before Madonna made it a fashion statement.

Here’s a collection of 80 years of comic-book work attire. Calling these characters fashion trendsetters may be a stretch but their wardrobe choices have gone in and out of vogue — even though the characters themselves have remained curiously ageless. 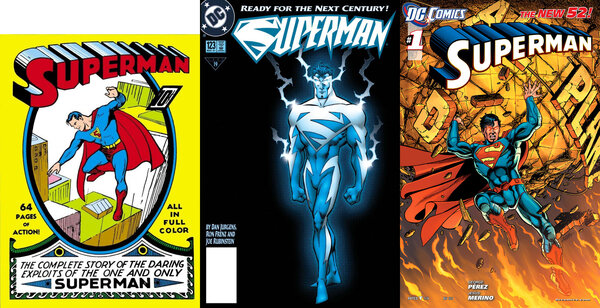 Most people know Superman’s familiar red-and-blue costume and his chest emblem. The Man of Steel first appeared in 1938, when he resembled a circus strongman. While his color palette has stayed fairly consistent, other aspects of his costume got more refined over the years, including his stylized “S” emblem.

The 1990s were rough: He died in 1992 and returned the next year with a black bodysuit, a silver “S” shield and long hair. Then in 1997, he received one of his most shocking (and most temporary) new looks: an electric blue-and-white suit.

When DC rebooted its heroes in 2011, Superman was reimagined in an armored look with a high collar and red piping. The red trunks were eliminated until 2018.

Marvel, the other longtime comics juggernaut, had a renaissance in the 1960s, bringing with it flawed heroes and sartorial innovation. Lanky Peter Parker, before he became Spider-Man, initially wore a disguise to save himself from teasing when he accepted a challenge to win $100 if he could survive three minutes in the ring against a beefy wrestler.

Peter soon fashioned his famous costume, which looks like a seamless, full-body suit (think footie pajamas) but is actually separates. In 1984, during an adventure in space, Spider-Man famously donned a black-and-white costume, which turned out to be alive.

Hail to their comic book creators, Jack Kirby, for drawing the women as attractive, but not cheesecake (that would come later, by others), and Stan Lee, for coining “unstable molecules,” the material that allows costumes to shrink, burn, stretch and transform as needed.

The ’70s, often an era of ridicule for non-superhero fashion, brought an instance of a hero mocking his own costume. In his 1972 debut, Luke Cage calls his outfit “hokey”: a low-cut, bright yellow shirt, tight black pants, a metallic headband and wristbands, and giant chains worn as a belt.

Further down this crooked path of heroism is the Punisher, a vigilante with no moral reservations about killing, who first appeared in 1974. He has a more traditional costume, including a large skull emblazoned over his torso.

In recent years, his symbol has been co-opted by some police and law enforcement personnel, though Gerry Conway, who created the antihero told Forbes in June: “The Punisher is representative of the failure of law and order to address the concerns of people who feel abandoned by the legal system.”

When a martial arts mania swept the nation, comics responded with a number of characters including Shang-Chi, Iron Fist and Richard Dragon, many of them clad in somewhat unimaginative combat attire.

A Is for Accessory

Comic books in the ’90s are known as a period of excess: Speculators could not get enough of new No. 1 issues, gimmick covers or stories that promised to change everything (long before every season of “The Bachelor” pledged the same).

This era is also notable for heroes one-upping each other with costume adornments: massive shoulder pads, arm and leg straps and enough pouches that would turn Batman’s utility belt green with envy. The artist Rob Liefeld, who was guilty of some of these designs, even parodied himself in 2018 by creating The Pouch, a crime fighter made up of pouches.

Jackets were another popular choice during this era. Many of the Avengers wore them, sporting the team’s logo on the shoulder. Not to be outdone, in 1994, Wonder Woman donned bike shorts, a leather bra and a cropped jacket, for about six months.

The Influence of Film and Television

When the X-Men movie franchise began in July 2000, the mutants traded their brightly colored skintight comic book looks for black leather. “You actually go outside in these things?” Wolverine (Hugh Jackman) asks in the first film. “What would you prefer? Yellow spandex?” says Cyclops (James Marsden).

In the comics, some mutant uniforms went down a similar path until a return to tradition in 2004. This was discussed by those same X-Men: When Cyclops tells the team that it’s time to act like superheroes, Wolverine says, “Is this gonna be about tights?” Cyclops responds that superheroes wear costumes, and “quite frankly, all the black leather is making people nervous.”

In 2016, Jason Momoa began portraying Aquaman on film. The next year, the comic book version was depicted with darker hair, like the actor’s, and, as of 2019, similar tattoos.

From Ms. Marvel to Captain

It took nearly four decades, but Carol Danvers, an Air Force officer introduced in 1967 who would go on to become Captain Marvel, finally received a costume worthy of her stature. But it was a bumpy road.

When Danvers became Ms. Marvel in 1976, she wore a midriff-revealing variation of the male Captain Marvel’s costume. Two years later, she got a costume that combined the typical superhero “swimsuit” look with high boots.

But in 2012, the artist Jamie McKelvie designed a costume that was more like a military uniform, similar to what the character wears in the 2019 “Captain Marvel” film starring Brie Larson.

The character has already inspired the next generation of champions. In 2014, Kamala Khan, a Muslim teenager in Jersey City, became the new Ms. Marvel. Kamala is a tremendous fan of Captain Marvel and has a dream about meeting her: “I want to be you. Except I would wear the classic, politically incorrect costume and kick butt in giant wedge heels.” (In reality, she opts for a modest costume influenced by her cultural traditions.)