The Wood brothers are one victory shy of one of NASCAR’s most exclusive clubs. Only seven organizations in the past 73 years have won at least 100 Cup Series races, and each had far more resources than the single-car team that put Stuart, Virginia on America’s motorsports map.

Wood Brothers Racing has been around almost as long as racing itself. Clay, Delano, Ray Lee, Leonard, and Glenn Wood started building and racing cars soon after Bill France founded NASCAR in 1948. The family has been racing ever since, fielding No. 21 Fords and Mercuries for (among many others) A.J. Foyt, Dan Gurney, Parnelli Jones, David Pearson, Cale Yarborough, and Neil Bonnett.

The current management team includes the late Glenn Wood’s sons, Eddie and Len, and their sister, Kim Hall. The third-generation Woods—Jon, Jordan, and Keven—have active roles. Hall of Fame mechanic Leonard, still cool at 86, remains a legendary presence. The organization relocated from Stuart to the Charlotte, North Carolina area in 2004 and now races from Mooresville, North Carolina, not far from its technical partners at Team Penske.

Despite its current non-winning streak, the team remains a popular and respected member of the NASCAR community. That’s especially so among older fans who remember when the undermanned team challenged on a regular basis before high-dollar sponsors changed everything. And you might be surprised that Eddie and Len differed significantly when asked to name their family’s five most important victories.

“Any win at Daytona is the biggest and the best just because it’s Daytona.”

“Any win at Daytona is the biggest and the best just because it’s Daytona,” Eddie recently told Autoweek. “For me, it’s how I feel at the time, not how I feel later. Even now, for the team and the family and our business, Trevor Bayne winning the 2011 Daytona 500 is our greatest win.”

Did he say Trevor Bayne? Really? Is he serious? After all, the Woods had won 500s with Tiny Lund, Yarborough, Foyt, and Pearson before Bayne was even born in 1991. How can a 20-year-old winning in his second career start outshine those other four? After all, the kid never did anything else and was gone from Cup by 2018.

But Eddie explained that while Bayne’s victory has been overlooked by some fans, it was the one that capped a remarkable turnaround for the team. Some say it might have saved the company, but Eddie hesitates to go quite that far.

“We had gone from running full-time to a real bad spot,” Eddie Wood said. “The economy had tanked and we were missing races, so we went to a partial schedule to survive. This was ’09, and Ford Motor Company and (long-time friend) Edsel Ford II let us cut back our schedule. That allowed us to regroup and keep going. And Ford Performance helped with more resources and support.

Consider this: the race was Bayne’s first at Daytona Beach; at 20 years and one day he remains the youngest 500 winner by more than four years; he was the seventh driver (it’s now eight) whose first Cup victory was the 500; after starting 32nd, he led only the final six laps (203-208) as the race went into overtime for a green-white-checkered finish; David Ragan led the first late-race restart to green, but was penalized for changing lanes too soon; that moved Bayne to the front, where he stayed to beat Carl Edwards and David Gilliland.

It’s conjecture, of course, but Bayne may have won thanks to advice from Doug Yates, a noted Ford-affiliated engine expert. Eddie set the scene:

“Our primary car had been good in preseason testing and good in practices,” Eddie Wood said. “It was still good until it got wrecked in Thursday’s qualifying race. It was pretty torn up and we hated to lose it. Len and I were headed back to the garage when we bumped into Doug. We told him we were debating whether to fix the primary car or unload our backup.

“We were walking along and he said, ‘Well, what would Leonard (Wood) and (three-time Daytona 500-winning owner) Robert Yates (Doug’s father) do in this case?’ We all agreed they’d fix it, so that’s what we did. Our crew chief, Donnie Wingo, wanted to fix it, too, so with help from Roush-Fenway’s people we made it fine again.”

Two of Eddie’s four other victories also came in the 500:

• The ‘76 race featured the last-lap, last-turn wreck between Richard Petty and Pearson. In an unforgettable finish, Pearson nursed his battered car beneath the checkered at maybe 40 miles per hour as Petty sat powerless in the trioval grass. “I remember like it was yesterday,” Eddie said. “It was like the Steelers and Cowboys at the end of a Super Bowl. With 20 to go and then 10, you just knew it would come down to them. It’s one of my favorite memories.”

• Blaney at Pocono in ‘17 was another major moment. “We were back running full time like we wanted to,” Eddie said. “We were starting to gel again as a team. He had to pass Harvick and (Kyle) Busch at the end, and he did it perfectly. That was big for us since we were early into our technical affiliation with Penske.”

• The ‘72 Daytona 500 with Foyt also is among Eddie’s top-5. The Woods and Foyt had won five races together and had been friends for years. That was among Eddie’s favorites because it was the first 500 victory he saw in-person as Foyt beat Charlie Glotzbach.

• Glenn won only four races, but his status as an owner and stock car pioneer rightfully got him to the NASCAR Hall of Fame. His last victory was July 1963 at the quarter-mile bullring at Bowman Gray Stadium in Winston-Salem, North Carolina. He started on pole, led the first lap, was spun and fell toward the rear. He rallied to lead the final 94 laps in beating Hall of Fame friend Ned Jarrett by five seconds.

Len’s five biggest include a convertible victory by his father; a $10,000 payday at Charlotte; servicing Jimmy Clark’s winning car at Indy; the unforgettable ’76 Daytona 500; and Bayne’s 500.

• “Daddy hadn’t won in ’56, so he wasn’t on Ford’s ‘deal’ for 1957,” Len recalled. “It wasn’t huge money; mostly modest help like tires and parts and pieces. Daddy won early in ’57 at Fayetteville, North Carolina. When Pete DePaolo (former Indy 500 winner and head of Ford Racing) called to congratulate him, Daddy said he had a car ready (to keep racing) but was about out of money. DePaolo sent him six free tires, and Daddy had three straight top-5s after that. When he went to Richmond, Virginia and won again, DePaolo called and said Daddy was on the deal (worth $800). Winning Richmond was very important because it kept us in business. It may have kept Daddy from going back to the sawmill.”

• Even though Clark’s victory in the 1965 Indy 500 in a Lotus/Ford didn’t count for anything in NASCAR, it gave Wood Brothers Racing world-wide recognition and strengthened its relationship with Ford. “The guys took only 42 seconds total to refuel Clark twice that day,” Len said. “They never had to change tires. Daddy said it was the most publicity they’d ever gotten for the least amount of time doing anything. It was Ford’s first Indy 500 victory and the first time anybody had average over 150 miles per hour.” 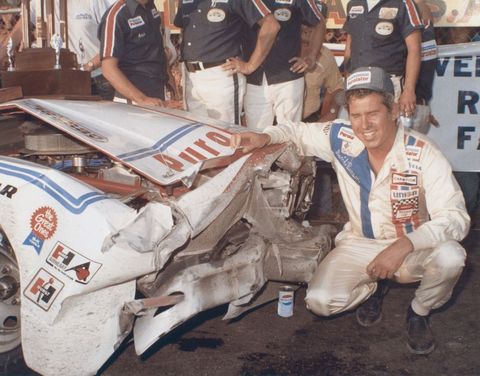 • Like his brother, Len included Pearson over Petty in the ’76 Daytona 500 to his list. “It was one of the most thrilling finishes anywhere in racing,” he said. “And it was the first time I’d been there to see us win a Daytona 500. For me, it was a huge one.”

• And, finally, Bayne in the 2011 Daytona 500. “It was one of the greatest for us because it helped keep us going,” Len said. “At that time, Trevor turned things around for us. That win fixed some issues that might have gone bad if he hadn’t won. He was just a kid who didn’t know what he couldn’t do.”

But, wait … there’s even more:

• The Ford that Glenn drove in his 1963 Bowman Gray victory was the same car Lund drove to victory in that year’s Daytona 500. Bowman Gray is a flat, slow, quarter-mile; Daytona International Speedway is high-banked and goes for two-and-a-half miles. 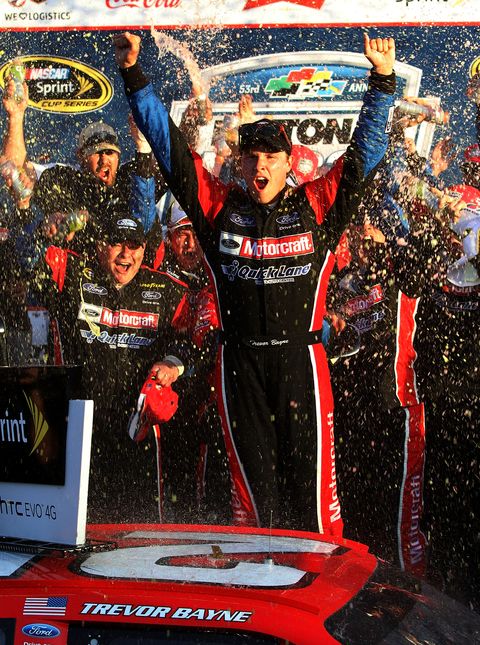 • Because Bayne was just two days out of his teens and Florida’s drinking-age was 21, NASCAR didn’t allow the traditional champagne shower in Victory Lane. Instead, the post-race spraying featured (officially, anyway) Gatorade and Coca-Cola.

“When you miss a race like the 500 and are walking through the garage and run into people you see every week, they don’t even look at you,” Eddie Wood recalled of that long-ago lost weekend. “They don’t know what to say. It’s like somebody’s died.”