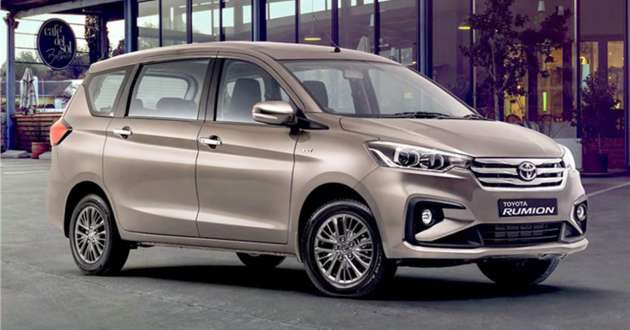 The Toyota Rumion, a seven-seater MPV, has just been announced for South Africa. It’s essentially a rebadged of the Maruti Suzuki Ertiga that’s sold in India, which makes the Rumion the third Maruti Suzuki-based Toyota model to be rebadged after the Glanza (Maruti Baleno) and Urban Cruiser (Maruti Vitara Brezza). Fourth, if the Ciaz-based Belta is to be considered as well.

No mechanical changes have been made, so the MPV continues to be powered by the Ertiga’s 1.5 litre four-cylinder naturally-aspirated petrol engine, developing 105 PS at 6,000 rpm and 138 Nm of torque at 4,400 rpm. A five-speed manual or four-speed automatic is available, sending drive to the front wheels.

There are no major styling changes as well. Aside from the badge swap and brand-specific grille, everything else is shared with the second-generation Ertiga. The wheels appear to be finished in a darker grey tone, but that’s pretty much it.

So far, no photos of its interior have been made public, but expect no changes save for the customary badge swap. Everything else should be carried over, including the flat-bottomed steering wheel, analogue instrumentation and a touchscreen infotainment display.