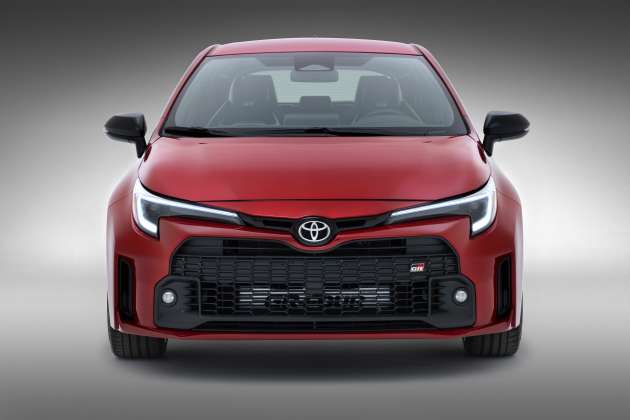 Launched in April this year, the Toyota GR Corolla brought a more powerful, 304 PS version of the G16E-GTS three-cylinder 1.6 litre turbocharged petrol engine from the GR Yaris – along with its GR-Four driveline – and packaged it in the basic shell of the Corolla Hatchback, forgoing the bespoke, dropped-roofline body of the three-door GR Yaris.

This has been joined more recently by the GR Corolla Morizo Edition, a limited-production, even more performance-focused variant that packs drivetrain and chassis upgrades in a body that seats just two. For those who want the GR Corolla in a sedan body, the rumour mill has it that one such car is in the works.

According to Japanese site goo-net, the three-box version of the GR Corolla will feature the same powertrain as the hatchback original, which is the aforementioned G16E-GTS 1.6 litre turbocharged three-pot that outputs 304 PS at 6,500 rpm and 370 Nm of torque from 3,000 rpm to 5,500 rpm.

Given the platform commonality between the sedan and hatchback versions of the Corolla, as both are built upon the GA-C iteration of the TNGA platform, this would make possible the inclusion of the GR-Four all-wheel driveline in the three-box version. Like the GR Yaris, the GR Corolla uses MacPherson struts in front and double wishbones at the rear, a setup also used on the standard Corolla sedan.

While the GR-Four driveline from the GR Yaris is also deployed in the GR Corolla, the larger car gets its drive modes independent of the AWD modes, and which offers adjustment of the throttle response, steering weight and other parameters. This enables the driver to choose a torque split of 30:70, 50:50 or 70:30 front to rear, and these are likely to feature on the GR Corolla sedan, should it reach production.

Closer to home, we’ve also been given a visual idea of what such a car could be; graphic rendering maestro Theophilus Chin has offered his take on what the GR Corolla could look like in a three-box sedan form.