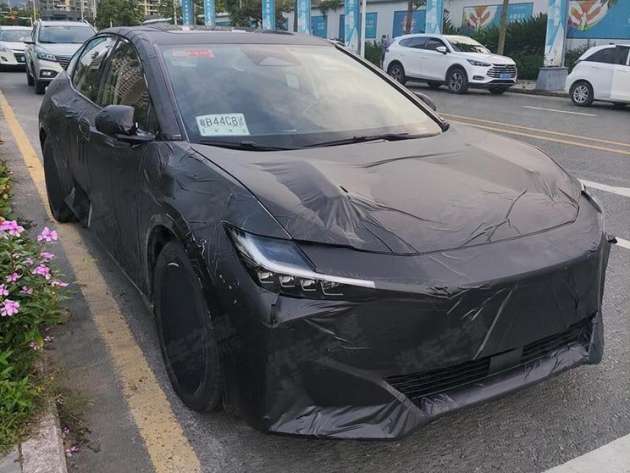 Toyota is clearly working at double speed to make up for its electric vehicle tardiness. Less than six months after revealing a slew of battery-powered concepts, it has already put one of these on the road in the form of the bZ SDN. Which, as the name suggests, is a conventional four-door sedan.

As you can see in these photos published by Autohome, the prototype was captured in China and, despite the garbage bag camouflage, shows clear influence from the show car. Visible are the L-shaped headlights (joined by a slim light strip on the concept), a protruding front snout, angular air intakes, a sweeping coupé-like roofline, a prominent window line kink, flush door handles and a heavily-sculpted bonnet and sides.

The rear of the concept was not shown in the provided press images, but we can see from the spyshots that the prototype sports a spoiler-like boot lid lip, X-shaped full-width taillights and a large trapezoidal cutout containing the number plate recess. Many of the design cues have been lifted from the bZ4X SUV, in particular the aforementioned front end and taillights.

Inside, the car appears to be even more avant-garde than the bZ4X, with a massive “floating” portrait-format touchscreen, a freestanding instrument display and the same gaping storage space underneath the centre console. It remains to be seen if the four-door gets the same yoke-style steering wheel set to be offered on the crossover at a later date. 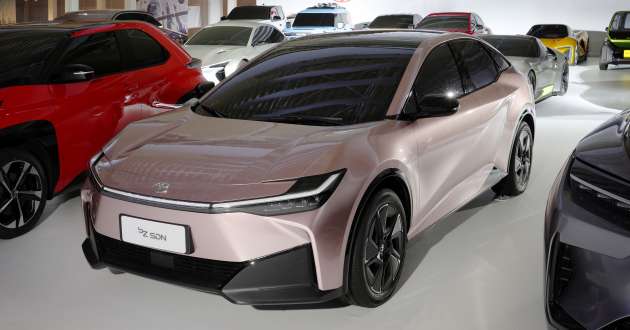 The midsized sedan, tipped to be called the bZ5, was claimed to meet “customer’s expectations for a first car.” It’s pretty big for a first car, however, if the purported measurements are to believed – its 4,725 mm length and 1,835 mm width sit neatly between the Corolla and Camry, although its 1,475 mm height and 2,880 mm wheelbase are larger than both its petrol-powered siblings.

No technical details have been released so far, but expect the bZ5 to ride on the same electric Toyota New Global Architecture (e-TNGA) – developed in collaboration with Subaru – as the bZ4X. It should also get the same 204 PS/265 Nm two-wheel-drive and 218 PS/336 Nm all-wheel-drive variants, along with a 71.4 kWh lithium-ion battery that should provide a range of around 500 km.