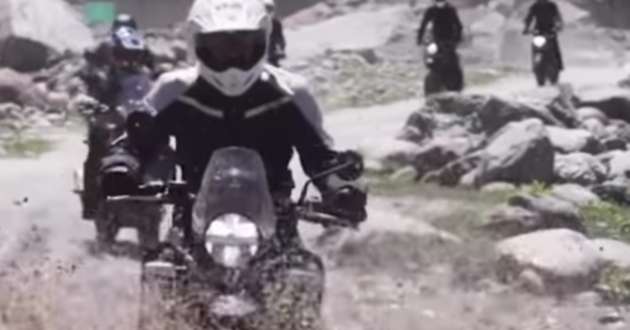 News of a new Royal Enfield Himalayan 400 replacement looks to be confirmed with the release of a teaser video from the Indian motorcycle maker. Only coming with the words, “Testing 1, 2, 3… ” with no model name disclosed.

However, looking at the short video, it can be seen Royal Enfield’s new bike follows the same styling as the Himalayan. More so when the video shows the bike being taken off-rad and ridden through water.

Following reports from Indian moto media, including spyshots from Rushlane, the possible Himalayan replacement might get a larger engine. The current model Himalayan comes with a 411 cc single, and rumour has it the new mill might be a 450 cc single.

Aside from the engine, online reports state the Himalayan’s five-speed gearbox will be substituted with a six-speed transmission while other changes include upside-down forks and new body panels.

Other information being discussed about the new Himalayan include switchable ABS on the rear wheel for off-road duties along with the LED lighting seen in the video. The new Himalayan 450 is said to get its public unveiling at the EICMA show in Italy this November while the official world launch will likely take place early next year.